In the Phase 1 RC program MDI tested around 14 gold deposits and prospects – six existing deposits and eight additional prospects – all situated within the Company’s wholly owned Sandstone processing plant and the majority of them on permitted Mining Leases.

Although the RC drilling did not generate any significant results from the Tailings South prospect, impressive results have been attained from the Two Mile Hill deposit and Twin Shafts deposit. 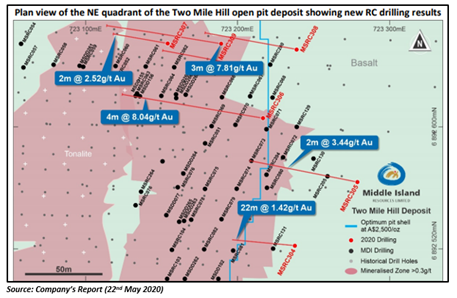 The RC drilling was conducted within the northeast quadrant of the Two Mile Hill open pit deposit to provide further confidence and/or extend the existing 2012 JORC Inferred and Indicated Mineral Resources situated within basalts close to the mineralised tonalite.

Open pit optimisation studies conducted in the past indicate the northeast quadrant of the Two Mile Hill deposit, at which the RC drilling was undertaken, is very sensitive to Mineral Resource upgrades and/or additions within the basalt, possibly deepening the entire open pit by minimum 20m, and probably by as much as 40m, thereby increasing the associated gold processing inventory considerably.

The results received from the Two Mile Hill open pit deposit to date suggest this goal can be very well achieved.

Middle Island has identified a mineralised extension from RC drilling at the southern extremity of the Twin Shafts deposit, which lies beneath ~5m of waste rock, and is located immediately along strike from the Twin Shafts in-pit tailings storage facility.

Limited infill drilling undertaken at southern end of the Twin Shafts deposit has returned new RC drill intercepts, including multiple 2m to 6m intervals of circa 1g/t Au. The results are largely consistent with previous drilling assays, as indicated in the below figure: 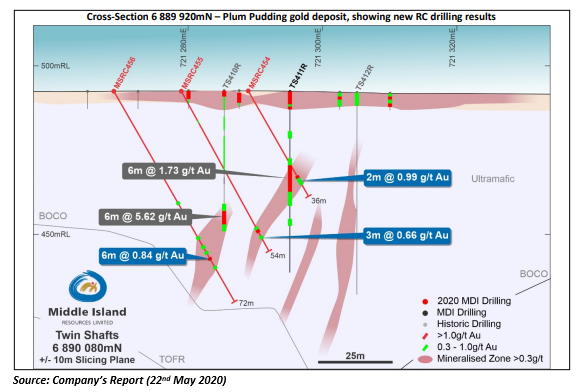 Although the mineralised extension discovered at southern end of the Twin Shafts deposit is of the modest grade, it will be assessed and incorporated as a maiden Mineral Resource for evaluation in Sandstone’s feasibility study update.

Moreover, the proximity of the mineralised extension to the existing in-pit tailings storage facility indicates that the tailings capacity can be expanded by mining and waste generated via that mining can be used for an intended tailings dam expansion and/or lift, delivering an economic benefit along with potential mill feed.

Middle Island is expected to report the results from the remaining 44 holes (2,742m) drilled under Phase 1 RC drilling next week. 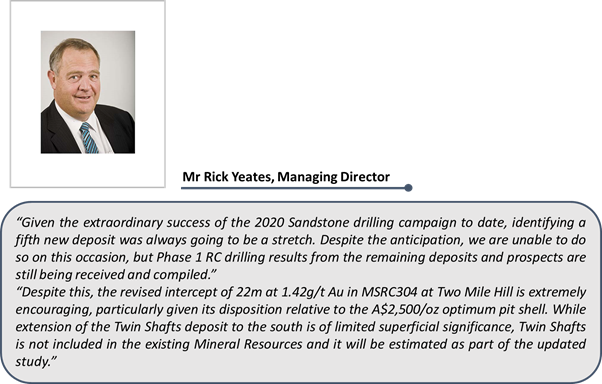 Middle Island is on track to conduct the next phase (Phase 2) of exploration and resource drilling at Sandstone project, to bring four newly identified deposits into an Indicated Mineral Resource classification for consideration as Ore Reserves in the updated feasibility study. Backed by the extraordinary success of the 2020 Sandstone drilling campaign to date, the Company has raised $4 million (before costs) in a tightly discounted Placement to fund Phase 2 RC program, that will be accelerated by engaging an additional drill rig. The market seems to back Middle Island as the stock has appreciated by 3x on a YTD basis.