You Cannot Miss On The Latest Updates From These Energy Players- CVN, PDN and KAR

The way Australia supplies and uses energy continues to change- the type of energy, method of using it and where it is coming from- is an ever-evolving process. This is primarily driven by the introduction of technologies, economy’s condition and structural changes, and environmental awareness paradigm shifts. What remains constant is the fact that Australia’s energy consumption continues to rise, with improved energy productivity.

As per the report, the country creates $294 million in GDP for every petajoule of energy consumed, with a major chunk of growth reported from the mining sector (which rose by 9 per cent in 2017-18). The increase in natural gas and LNG export support are a few major catalysts of this growth.

When it comes to consumption, the transport sector remained the largest user of energy (which rose by 2 per cent in 2017–18), underpinned by higher diesel use and increased use of jet fuel.

During the year, oil accounted for the largest share of Australia’s primary energy mix at 39 per cent, followed by coal (30 per cent) and natural gas (25 per cent). The renewable energy sources accounted for 6 per cent.

Discussing the energy trade, most of Australia’s energy production is exported. In 2017-18, the net exports were equal to two-thirds of production. 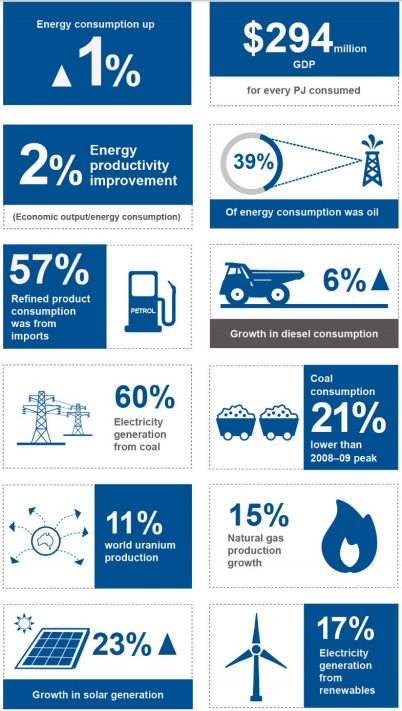 Australian Energy Statistics 2017-18 (Source: Department of the Environment and Energy)

With this backdrop, let us acquaint ourselves with the recent and significant updates from the three energy players, listed on the ASX:

Expressed as an ‘incredible quarter’ by Managing Director Adrian Cook, CVN released its Quarterly Report for September 2019 on 14 September 2019 with the below highlights:

The below table outlines the highlights of the statement of cash flows for the quarter ending 30 September 2019:

On 14 October 2019, PDN pleasingly notified about improved economics to re-start its flagship Langer Heinrich Mine in Namibia after the completion of the first stream of the Pre-Feasibility Study, which aimed at a rapid, low capital and low risk restart. The mine is believed to be a low-cost and long-life uranium mine where the Pre-Feasibility Study is expected to be completed in October 2019. The highlights from PDN’s update, are provided below:

Recently, KAR intimated the media that its wholly owned subsidiary Karoon Petróleo e Gás Ltda has signed a senior secured term loan facility amounting up to US$275 million. The facility, fully underwritten by the Singapore branch of ING Bank N.V. is priced on a 4% margin over LIBOR for a term of up to 4 years and would be fully amortised in its loan tenure.

It would be used as part of the funding package for the acquisition of a 100% operating interest in the Baúna oil field, offshore Brazil.

Further, KAR notified that the agreement has an option to provide additional funding for the tie-in development of the Patola oil discovery, subject to final lender approval, Patola reserve certification, an approved updated bank model and project sanction.

Currently, the company would proceed with the completion of the ancillary documentation and regulatory approvals before completing the Baúna acquisition, most likely to occur during the first quarter of CY2020.

In another announcement, the company strictly stated that the media speculation regarding equity raising to fund the Baúna acquisition were incorrect, and it had not approached shareholders or new investors for the same. KAR has not sought to launch an equity raising, as of now and is working towards completing final contracts for the acquisition and transition to operating the asset.

Let us now look at the stock conduct of the discussed companies, and check their YTD returns, during the trading session on 15 October 2019 (AEST 3:21 PM):