Australian Dollar is one of most traded currencies in the world, and its sensitiveness to domestic economic activity, commodity prices and exports, makes it pro-cyclical in nature.

In January 2020, being a risk-sensitive currency, the increasing risk on economic activity due to bushfires, escalating US-Iran tensions, and lately, the coronavirus threat has taken toll AUD pairs.

So, it is likely that deterioration in the commodity prices (energy and metals), economic activity, trade etc. would lead to drop in the value of AUD. During January, the AUD had been on a falling run.

(FX rates as of 4 February 2020, unless or otherwise mentioned)

Since the beginning of January 2020, AUDJPY has been on falling run as well, presently trading around JPY 72.72/AUD (12:41 AEDT), which was around JPY 76/AUD at the end of 2019. With Japan being our second largest trade partner, this 5% up move in Yen against the AUD would be closely monitored by the market participants.

Moreover, the Aussie dollar has suffered one of the worst months in the recent past, and on Friday (31 January 2020), the rates on the AUDUSD contracts ended at USD 0.66 /AUD, which was near to 11-year low.

Inflation firmed up in January 2020

An inflation-indexed bond is a live indicator of real returns or real yield, which reflects the impact of expected inflation on the nominal yield.

It is also because the yield on an inflation-linked bond is equal to yield on the normal Australian 10-Year bond minus the expected rate of inflation (CPI) in the country, and other factors. As a result, the 10-year inflation-linked sovereign debt in our country was yielding negatively.

Over the year to December 2019, the CPI was 1.8 per cent, according to ABS. And, the Australian 10-Year bond yield is trending below 1 per cent lately. 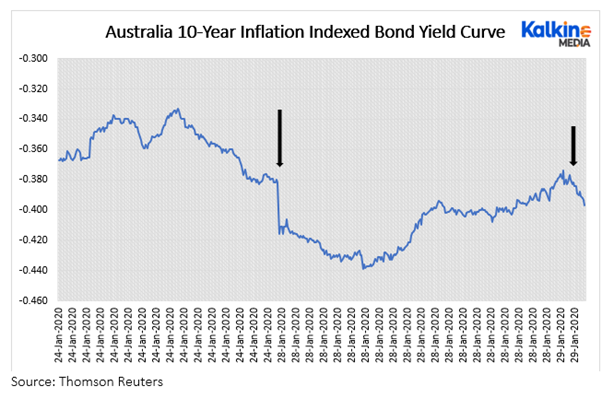 Also, the drought conditions had resulted in an increase in the food prices, leading to an increase of 1.3 per cent during the quarter, with meat and veal prices up 2.9 per cent, pork prices up 4.7 per cent, and a rise of 6.8 per cent for fruits.

There was an incremental shift of 0.1 ppts in y-o-y CPI, as the price falls were recorded in housing expenses, utilities, and new dwelling purchase by owner-occupiers.

You must be wondering why we are discussing inflation-indexed bonds in the context of a stronger Australian Dollar post the inflation print. Well, it is because of the relationship between sovereign yields, inflation and currency.

The latest data of CPI, which was released on 29 January 2020, sent the bond yields to further lower levels during the day (second arrow in Figure 1). And, the yield on the Australian 10-year inflation indexed bond touched -0.397 per cent.

The yield on the inflation indexed bond fell because the real interest rate came down further, as the CPI firmed up during the quarter and over the year to December 2019.

Why was Australian Dollar stronger?

We have been living in a world wherein the monetary policy of countries had failed to reach the targeted range of inflation for an extended period of time, and most of these countries involve developed economies, including the Negative Interest Rate Policy (NIRP) nations.

In its last monetary policy meeting in December 2019, the RBA has said that inflation is expected to pick-up in the underlying as well as headline terms, and the Central Bank expects the inflation to be around 2 per cent in 2020.

Also, it was noted that the institution is prepared to lower interest rates further in a bid to support sustainable growth, full employment and an inflation rate around the target.

Conventional wisdom suggests that increasing inflation devalues the domestic currency against the other currencies as the changes in relative inflation rates should impact exchange rates in the long-run (purchase power parity), but why the AUD firmed during intraday when CPI posted a rise in terms (29 January 2020)?

Currency valuation models consider range factors within the models, between two nations, to arrive at the fair value of foreign exchange rate among two currencies. And, these models include trade balance, purchase power parity, Balassa-Samuelson effect, behavioural equilibrium, fundamental equilibrium to name some.

As inflation firmed up during the December quarter, it dampened the expectation of further interest rate cut by the RBA in the February policy meeting, indicating that the interest-rate differentials on bond yields against the USA would not be stretched further.

This translated to a slight upward move in the currency markets for AUDUSD pair on 29 January 2020, as the spot rate on AUDUSD FX contracts touched $0.67. During January 2020, the spot for the AUDUSD FX has fallen from $0.70 levels.

Today at 2:30 PM AEDT, the RBA would announce its monetary policy decision, which is likely to drive the currency market. Stay tuned!