Value and Growth are fundamental approaches to investment. Growth investors look for companies offering earnings growth, whereas, value approach is based on identifying companies that are highly undervalued in the market.

Growth companies reported better than expected results in the preceding periods with gains in earnings during recent years and are expected to be delivering better than moderate results.

Value investing intends to look for companies that are heavily discounted in the markets. However, these companies tend to have strong fundamentals, lower price and a relatively lower valuation than their peers.

Webjet operates an online platform for selling travel products, including flights and hotels. It provides services to both B2C & B2B clients. During FY 2019, the company had acquired Destinations of the World and its controlled entities (DOTW) – a pure-play B2B platform, based in Dubai. 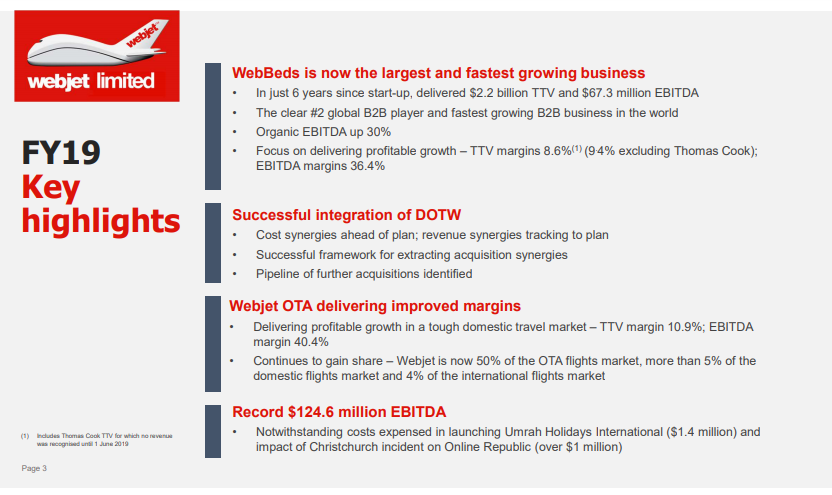 Revenue was up primarily by B2B business along with increased scale via JacTravel acquisition in August 2017, and DOTW. The company had incurred costs related to acquisition and integration, and borrowing increased amid pursuing growth prospects.

Propel Funeral provides services pertaining to death care in the ANZ region. During FY 2019, the company completed acquisitions worth $27.58 million, which included businesses in Australia and New Zealand.

Reportedly, the company had secured senior debt facility of $50 million for a term of three-years. In December 2018, sales agreement to acquire Dils Group was executed for a consideration of NZ$ 21.45 million and stock. In addition, the company acquired seven free-hold properties for $9.33 million. 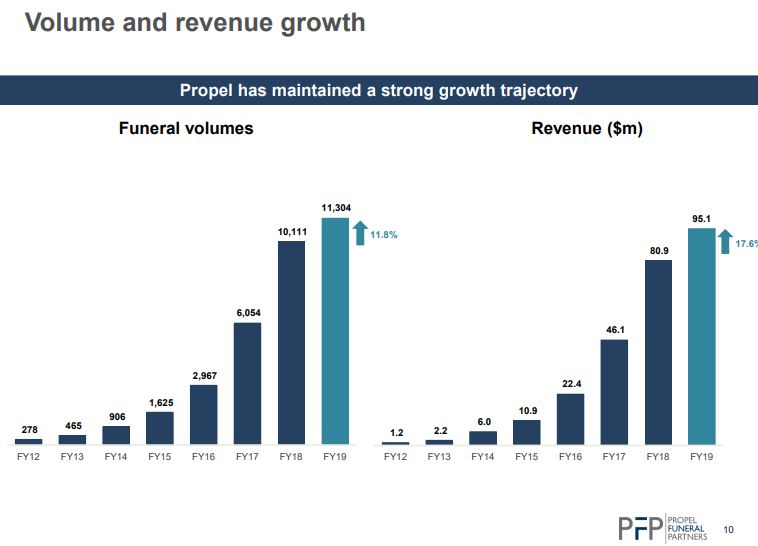 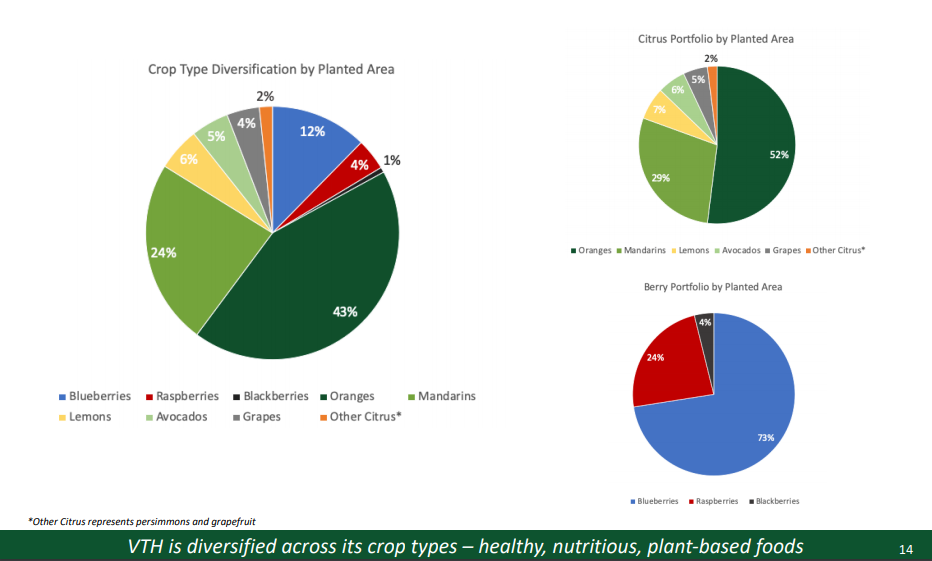 In addition, it had incurred a net loss in fair value of interest rate swaps amounting to $8.4 million, while the loss on disposal of non-current assets was $1.56 million.

Accordingly, consumer staples, real estate, and utilities were the top performers, and energy, financials, and material depicted underperformance. August had been a challenging month amid escalating uncertainties.

At August end, the portfolio was largely skewed towards the US with 59.6% exposure, followed by France, UK, Germany, Japan and more. NTA after tax and before tax on unrealised gains for the period was 245.55 cents.

NCC is a listed investment company seeking to provide investors with conservative capital growth above the benchmark, and a stream of fully-franked dividends. During FY 2019, the company had posted first loss since inception, recording $7.5 million in net profit after tax.

The Board of the company is dedicated to providing a stream of fully-franked dividends, and despite suffering losses, the company had declared the dividend. NCC aims to provide long-term concentrated exposure to micro-cap industrial businesses.

In FY 2019, the investment performance of the company was -12.51%, and the year had proved to be a challenging year. However, the board believes that the underlying companies offer good value. 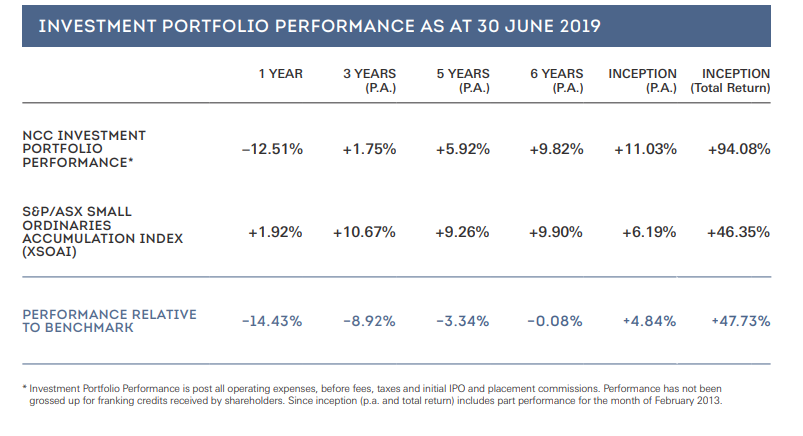 Also, the company had focused on improving transparency and quality of its investment communications, which resulted in an increasing number of new shareholders. Besides, the revenue of the company was down 236% to -$8.81 million.

Bapcor Limited is a seller & distributor of motor vehicle aftermarket parts and accessories and caters to motor vehicle servicing as well as services related to automotive equipment. It has a network of 900 sites offering services to customers.

In FY 2019, the company had sold the TRS Tyre and Wheel business in New Zealand for NZ$ 20 million, which contributed $1.8 million in NPAT during FY2018. In December 2018, Bapcor acquired Commercial Truck Parts, as well as numerous businesses. It also established its presence in Thailand. 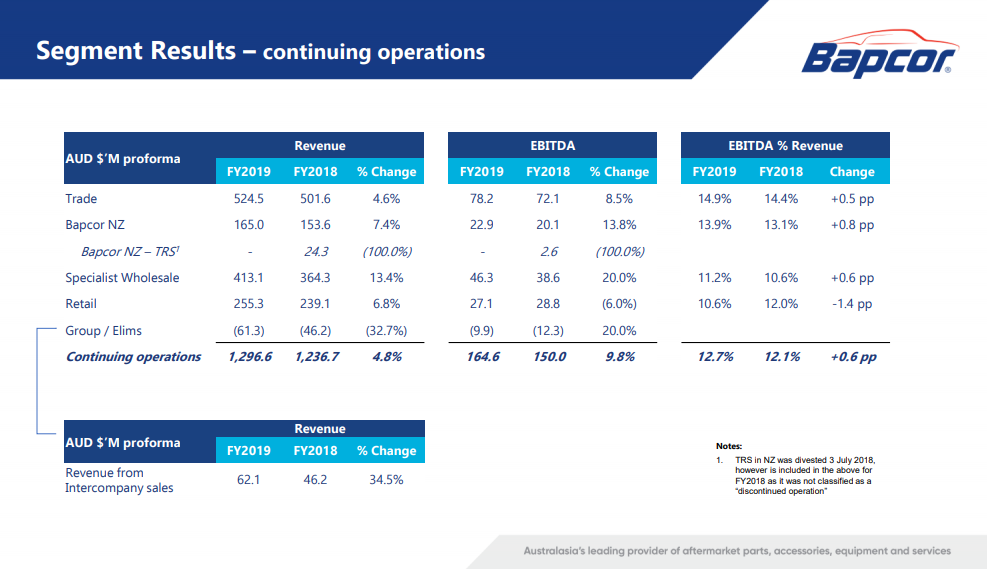 Bapcor believes that its human resource, supply chain, diversified business provides competitive advantages. During the year, the company had registered a growth of 4.8% to record $1.29 billion in revenue from continuing operations compared to $1.23 billion a year ago.

CLICK HERE FOR YOUR FREE REPORT!
Tags:
Bapcor Limited (ASX: BAP) ASX: NCC ASX: WEB ASX: PFP ASX: WGB ASX: VTH
All pictures are copyright to their respective owner(s).Kalkinemedia.com does not claim ownership of any of the pictures displayed on this website unless stated otherwise. Some of the images used on this website are taken from the web and are believed to be in public domain. We have used reasonable efforts to accredit the source (public domain/CC0 status) to where it was found and indicated it below the image.