Stocks trading at a price less than $ 1 are called penny stocks. They are the stocks of small companies and are highly volatile in nature. There is a high level of risk associated with the penny stocks, in addition to higher potential for reward. Investors can make massive money through these stocks, but at the same time, they can even lose their entire investment or above their investment, in case they purchase these stocks on margin.

Bod Australia Limited (ASX: BDA), a medicinal cannabis healthcare products company, unveiled on 15 August 2019 that NewH2, the innovation unit of Health & Happiness Group Ltd, injected $ 5.5 million in BDA in exchange for a 17.64% stake. The $ 0.37 per share agreement included $ 1.5 million in upfront payment for the exclusive global licence for the commercialisation of BDA’s cannabidiol and hemp products. The partnership would have an initial focus on markets including the United Kingdom, United States, France, Italy and the Netherlands.

Moreover, on 14 August 2019, the company announced to have discovered a new family of proteins in human cells that provide antioxidant protective effect on application to skin cells. The new family of proteins were able to protect the cells from oxidative damage and help to increase the tolerance to ultraviolet rays along with other sources of oxidative harm when overexpressed in the cells of mammals.

The company is looking for opportunities in order to use these proteins into topical skin creams as anti-aging and protective antioxidant agents. The discovery enables a significant optionality for the company across all its business divisions. The new discovery made in collaboration with the University of Technology Sydney is expected to enable the company to develop a patent-protected novel anti-aging topical application and topical delivery system, though this depends on further development.

Depending on the finalisation of a relevant formula, the company would move ahead with product commercialisation initiatives. The company could commercialise and licence the product to large-scale pharma companies. In 2018, the global anti-aging market was worth US$42.5 billion. The company expects this value to reach US$55.03 billion by 2023.

Nuheara Limited (ASX: NUH), a global provider of smart personal hearing devices, on 14 August 2019, announced to have been approved as a registered provider to the National Disability Insurance Scheme of Australia. The complete range of NUH’s products can be bought through NDIS approved funding. The funding would be made available under the Hearing Equipment category to support people with autism, which is a neurodevelopmental disorder.

The National Disability Insurance Scheme product approval procedure can be initiated from the website of Nuheara Limited, using an automated quotation method for NDIS plan managers or self-managers.

In FY2017, around 3% of funds were directed towards Assistive Technology, with the participants purchasing a broader range of AT products and services using their NDIS budget, thereby providing them with the choice as well as the purchasing power. According to Amaze, which is the autism peak body in Australia, the neurodevelopmental disorder is the largest diagnostic group within the scheme. Almost 29% of the participants are suffering from autism. The people with Autism face challenges related to auditory processing.

According to a preliminary report from the Centre for Auditory Neuroscience at the University of Melbourne related to the use of IQBuds BOOST™ and children with autism, there was a substantial enhancement in auditory attention secured, though the subject number was small. Also, a key factor that influence academic progress for children suffering from autism spectrum disorder was the ability to concentrate in background noise. 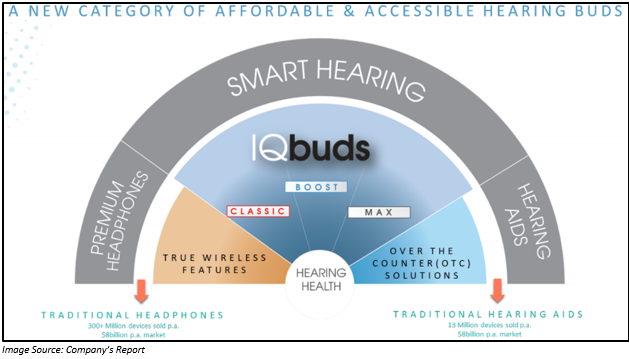 Being a registered provider on the NDIS would enable the company to support autism in the country, as well as boost its potential for market expansion. It would also expand the company’s reach beyond traditional hearing loss.

Nuheara Limited continued with its work on the repositioning of its sales strategy towards driving a counselling sales process during the quarter ended 30 June 2019. The company made developments wrt new retail approaches across multiple territories (IQconnectTM) and through online platforms (Direct to Consumer website). The company also launched IQstream TVTM accessory product to the end-users in the first week of June 2019.

In April 2019, after a period of technical and product-related discussions, the company received a confidential indicative non-binding letter of intent (LOI) from large multinational company Harman, which is owned by Samsung. Owing to which, its discussions with various OEMs as well as other partnership discussions for its products, which include LiveIQTM were kept on hold, pending for the outcome of the discussion with Harman.

The company in the first half of 2019 continued with strong unit sales growth. The DyeVert™ unit sales increased by 68% to 5,400 units as compared to the previous corresponding period. The net revenue of the company increased by 54% to US$1.8 million, on the back of continued demand for OSP’s contrast dye minimisation platform of products. However, the company made a net loss after tax of US$9.2 million, representing an increase of 5% on pcp.

The company had given 4 important presentations at two medical meetings, in which it highlighted CI-AKI and advantages of dye minimisation strategies via DyeVert. The company also rolled out DyeMINISH™ multi-centre global patient registry. DyeMINISH™ would help in examining the safety and performance of the DyeVert Contrast Reduction System. 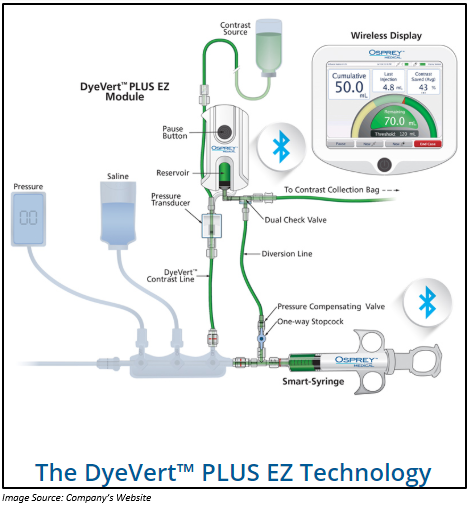 The company witnessed a fall in net assets as a result of a significant increase in total liabilities. The total shareholders’ equity for the period was $ 16,603,547. The net cash and cash equivalent available with Osprey Medical by the end of 1H 2019 were $ 16,274,842.