Australia is home to some of the top physicians as well as healthcare professionals. For more than 30 years, various companies across the globe have depended on the clinical trial in Australia and its capability to deliver timely results with high ethical standards and quality. In this article, we would cover three stocks related to the healthcare industry and report on their recent updates.

Nuheara Limited (ASX: NUH) is a world leader in the smart personal hearing device which transforms the lives of the people by improving their ability to hear.

On 5 July 2019, Nuheara Limited announced that it had finalized the capital raising of $4 million (before costs) from institutional and sophisticated investors. The raising of the capital was through the placement of 80,000,000 fully paid ordinary shares at an issue price of $0.05 per share to institutional as well as sophisticated investors. The placement received 80% participation from the existing shareholders.

The issue price of $0.05 is equivalent to a discount of ~ 9.1% to the closing price on 2 July 2019. The company stated that the funds raised through this placement would be used for funding an increase in the sales and marketing activities to assist new as well as the existing products and accessories. As per the company, greater customer awareness along with the targeted promotion would support the company in its future sales.

The settlement of the placement would take place on 12 July 2019. The shares under placement would be issued as per the Nuheara’s ASX Listing Rule 7.1 and would not require approval from the shareholders.

Immutep Limited (ASX: IMM) is a biotechnology company that is engaged in the development of new immunotherapy treatments for cancer and autoimmune disease. The company operates in Australia, Europe and the US. 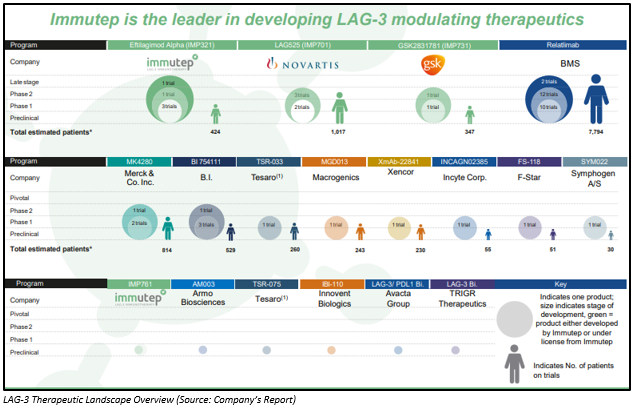 On 5 July 2019, Immutep Limited announced that its shares would be under trading halt pending for a release from the company related to the potential capital raising. The shares of Immutep Limited would remain under trading halt until the earlier of the announcement related to capital raise made to the market or before the commencement of the normal trading on 9 July 2019.

Recently, the company had finished the patient registration of the Stage IIb Active Immunotherapy PAClitaxel (AIPAC) clinical trial in HER2-negative/ Hormone Receptor positive (HR+) metastatic breast cancer (MBC). MBC is stage IV of the breast cancer and is the most advanced phase of breast cancer where cancer gets spread to other parts of the body like lungs, liver, bones, brains etc.

As a part of the study, around two hundred and twenty-six patients suffering from metastatic breast cancer were registered in the AIPAC study. The trial would help in evaluating the Immutep’s lead product candidate, eftilagimod alpha (efti or IMP321) along with chemotherapy to boost the immune response against tumour cells.

CEO, Marc Voigt highlighted that the completion of recruitment for the Phase IIb AIPAC study marks a major milestone for the company as it is IMM’s largest and most advanced clinical trial.

Impression Healthcare Limited (ASX: IHL) is an innovative healthcare company that belongs to the healthcare sector, and it sells personalized oral devices directly to the customers as well as through its increasing B2B chosen practitioner network of dentists. The company has its own lab in Victoria, and it provides first-class teeth protection and also helps its customers to fight bruxism, snoring, mild-to-moderate sleep apnoea as well as staining of the teeth with custom-fitted oral devices. The company is also entering the medicinal cannabis.

On 5 July 2019, the company announced that it had signed an agreement with Myoderm North America for supplying Dronabinol that would be used in the clinical trial for Sleep Apnoea. The company has also applied for an import license from the Office of Drug control (‘ODC’) for its 1st lot of Dronabinol product for the purpose of the trial.

A part of the Dronabinol capsules will be reserved for sale under the Special Access Scheme for those patients with loss of hunger, HIV/AIDS and nausea and vomiting caused by chemotherapy via an extensive distribution network of Cannvalate Pty Ltd.

In Australia, 4% of the population suffers from symptomatic Obstructive Sleep Apnoea, which happens with age and increasing obesity in the population. The company further highlighted that the global sleep Aponea devices market was valued at over five billion USD in 2017.

Further, IHL has had a string of announcements in the past two months, major ones are : on 03 July 2019 the company announced to the market about the successful placement of $1.65M and international expansion of its oral devices, on 28 June 2019, the company announced that it was chosen by Boxing Australia as the official brain injury research partner and official supplier of mouthguards, on 24 June 2019 the company updated the market on the commencement of Phase 2a clinical trial for Gingivitis and periodontitis using Cannabidiol mouthwash and toothpaste.