Is Cannabis The Most Growing Industry In The Aussie Land?

Do you know that market enthusiasts believe that legalising cannabis would generate approximately $8.5 billion in the country’s federal and state tax? Ponder over the massive revenue that this sector would add to the necessities related to healthcare, education and the environment.

Cannabis has been made legal in countries like Alaska (Since 1975), North Korea, Canada (since 2018- the first G7 and G20 nation to do so) and Uruguay. The first thing to have been traded over the web was cannabis in the early 1970’s. Moving onto recent times artists like Lil Wayne, Lady Gaga, Willie Nelson and even Steve Jobs have admitted to have used cannabis (some have come up with their memorable remarks under its effect too). While George Washington grew cannabis, there is buzz that boxing tycoon, Mike Tyson plans to develop his personal marijuana holiday resort.

The point of this discussion is- are we really ignoring the fact that the cannabis market could potentially be a global dictator? Before delving into the topic and overlining it with a close-to-home Australian perspective, let’s know more about cannabis:

The Alcohol and Drug Foundation classifies cannabis as a cannabinoid drug. In the cannabis sativa plant, the main cannabinoids are psychoactive cannabinoid THC and non-psychoactive cannabidiol. The drug is mostly used for recreational and medical purposes (archaically used for spiritual purposes as well), and it is believed to have geographically originated in Central Asia and the Indian subcontinent. The drug could be smoked, vaporized or eaten, in various forms, subject to its purpose.

Before understanding the industry, it is important to take note that medicinal cannabis in Australia was legalised in February 2016, at a federal level. However, the recreational cannabis use is presently illegal in Australia. To decipher the usage of cannabis in the country, it is enough to note that approximately 750,000 citizens of the indigenous population use cannabis each week, and the country has one of the highest cannabis prevalence rates across the globe.

After Australia, countries like Thailand, Malaysia, Singapore and South Korea are on their respective way to step up their cannabis market and are involved in either funding research, legalising or cultivating the cannabis crop to savour its benefits.

Market experts believe that even though Australia entered the cannabis sector a bit late than other economies like the US and Canada, it is perhaps the strongest player. With its existence for a mere three-year period, the Australian Cannabis Market has managed to create an optimistic mark and is tagged as the viable hub for the booming global cannabis industry. The Australian stock market has been open to international investors, especially after the 2016 legalisation, where the related domestic companies are pacing up their momentum.

The export of medical cannabis products was allowed post legalisation and this in turn aided the long-term supplies for patients along with the development of the local cannabis industry. The health sector is paving towards a reform with medical practitioners and specialists prescribing medicinal cannabis and constantly emphasizing on its significant impact in the health sector.

Looking into the progress of 2019, the Department of Health had granted more than 4,000 special access schemes applications towards the medicinal cannabis. February alone witnessed more than 700 approvals, with the progress being passed on to the following months as well. The Narcotic Drugs Act 1967 enabled domestic production of medicinal cannabis and further review of the Act would be discussed and presented to the Parliament in October this year.

To facilitate availability of medical cannabis to patients and medical practitioners, the government had allowed import of medicinal cannabis products. An online system was built to facilitate prescribers to apply for the drug requirements, the request is processed if all the details needed on it are met. Regulations are adhered to, clinical guideline documents are provided, conferences are being held and research is being motivated to provide the medical practitioners with the clinical evidences for the utilization of cannabis. It is safe to say that the country is upping its game to utilise the cannabis sector to its utmost potential. 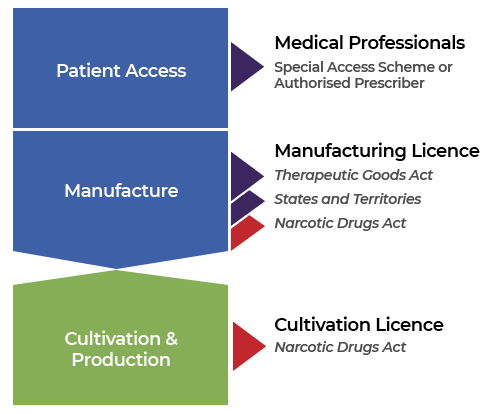 On the flip side, there is a section of market experts which believe that the country is slightly behind when it comes to legislations. The importance of progress is not mere availability, but also the accessibility. Legalisation and licensing of cannabis for recreational purposes could possibly have a great uplifted impact on the Australia’s financial market. Let us watch out for the developments on this end, in the due course.

Australian companies have been the topic of conversation in the global cannabis market. In late June, Elixinol Global Limited (ASX: EXL) became the first cannabis player to launch a media campaign in London Underground railway stations. More recently on 2 July 2019, it was notified that CannaPacific Pty Limited, the Australian partner to Aleafia Health Inc, would receive shipments from the latter to distribute cannabis in the Aussie market.

Let us look at a few stocks, listed on ASX, that cater to the cannabis market in Australia:

Let us now look at the recent updates and stock performances of 2 Cannabis related stocks:

Company Profile: A lead Manufacturer and distributor of industrial hemp products and early stage medical cannabis business with the business of importation, cultivation, manufacture and distribution of CBD and THC products, EXL was listed last year on ASX and has its registered office in Sydney.

New Distribution Agreement: On 4 July 2019, the company notified that Elixinol BV, EXL’s Dutch based wholly owned subsidiary, had signed an exclusive distribution agreement with MedVec International GmbH regarding the pharmacy and para pharmacy channels in Germany. The agreement would let MedVec sell EXL’s products via the existing sales network and is for a graduated period with the provision to extend to three years.

New Partnership: On 11 June 2019, the company announced that its wholly-owned subsidiary, Elixinol LLC, had signed a strategic partnership with RFITD Holdings, LLC, the RFI, LLC affiliate that would enhance the company’s exposure to the CBD-infused dietary supplements, food and beverage industries and nutraceutical segment through distribution to RFI’s customer bases.

Company Profile: A player from the Pharmaceuticals, Biotechnology & Life Sciences group, MDC is a Nutritional pharmaceutical research and development firm. It formulates novel bio-therapeutics to cure chronic diseases. MDC was listed on ASX in 2015 and has its registered office in New South Wales. 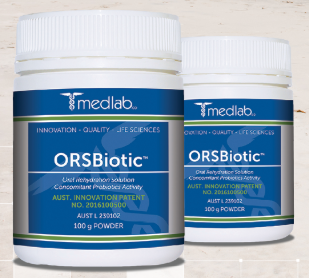 Operations Update: On 4 July 2019, the company released its operations update for the June quarter. It notified that it had achieved a total revenue of over $3 million for the quarter. This depicts a massive 135 per cent jump, when compared to the prior corresponding period. The YoY growth of the company was recorded at over 50 per cent.

MDC had recently received the Human Ethics Approval for a second NanaBis™ trial. It already possesses the Australian TGA licenses to own, supply, export and import and research Cannabis. The company stated that its research on NanaBis™ and NanaBidial™, which are cannabis-based medcines, was progressing well.

MDC’s range of self-branded nutraceutical range products were available in over 3,000 Australian pharmacies.