Cannabis is genus among a specific type of flowering plants in the family Cannabaceae. The family of plants has three recognised species, namely; Cannabis sativa, Cannabis indica, and Cannabis ruderalis. The structure of the leaves is arranged palmately, leaves diverting from a common centre. This plant is also known as âHempâ and can grow up to 8-12 feet.

One of the most important parts of the plant is its flower, which is used for various medical purposes; however, every part of the plant is usable from its leaves to roots. The plant has been believed to have originated from Central and South Asia. However, as the species is present since centuries and have evidence of been used in early Rome and Egypt era, the origin is not scientifically confirmed.

One interesting fact about the cannabis plant is that it is dioecious. In the plant kingdom, there are many ways of reproduction. Monoecious plants are the ones which produce two different types of flowers on the same plant. Then there are dioecious plants which are grown as a separate male and female plants.

The plant is chemically complex, having more than 400 chemical entities and cannabinoid compounds alone cover more than 60 of them.

Cannabis Usage in the Ancient Times:

The uses of cannabis were so magical that in some cultures and regions, it became an agricultural crop. In early times, people used cannabis for various purposes;

Post many years of research and development of using cannabis for recreational purposes, some of the medical benefits to heal chronic diseases have been uncovered.

As mentioned in our previous article, cannabis has been a hot and controversial topic due to its psychoactive properties. This has several associated risks like slowing down of brain functioning, illusion, change in mood, unusual behaviours etc.

Due to these symptoms, the drug has been regulated quite tightly not just in Australia but in other countries as well. loophole in the policies and licences may ultimately harm the end patients. Therefore, governments in these nations are quite serious regarding the control and regulation.

In Australia, cannabis is an illicit narcotic drug and the cultivation of it for any purpose other than that allowed through licence and permit schemes under the Narcotic Drugs Amendment Act 2016 is an offence. 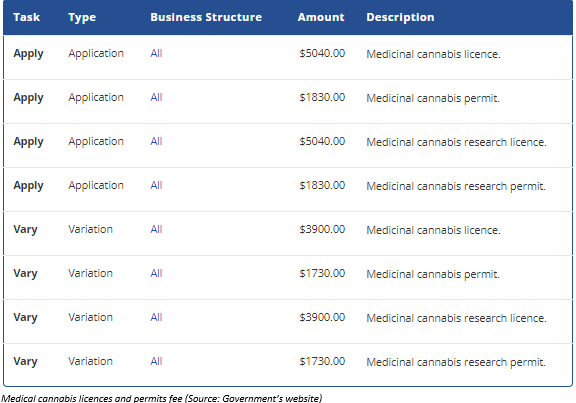 Office of Drug Control (ODC) is a government authority in Australia, incorporated with an aim to prevent the risk of diversion of medicinal cannabis. The regulation of medical cannabis products is being made by the Therapeutic Goods Administration (TGA), which regulates the access and quality of therapeutic goods.

Both these regulators are a part of the Australian Government Department of Health, making an entire Health Products Regulation Group.

In order to legally cultivate cannabis, the company must obtain a research license (ODC licence) first. After the licence, cannabis research permit (an ODC permit) needs to be obtained before commencing the cultivation of the crop.

An ODC licence has conditions that the cultivation/production of cannabis must be in accordance with a permit. The type and amounts of cannabis that can be cultivated or produced in mentioned in a permit

Materials required for cannabis production is only obtained after a licence and a permit.

A precondition for the licence is that one must show that the cultivation and production of the cannabis plant are for the purposes of either:

Some of the outlines of the permit are;

A condition that must be satisfied before a permit is that one must show that the cultivation and production of the cannabis plant are for the purposes of either:

On 5th June 2019, the companyâs subsidiary, Althea Company Pty Ltd has been granted a hemp cultivation licence, which allows the cultivation and processing of low-THC (Hemp) cannabis. In addition to obtaining the licence, Althea entered a contract with Tissue Culture Australia (TCA), under which TCA would be helping Althea to develop exclusive tissue culture protocols for cannabis plants.

On the technical front, the stock is in a positive trend and has given a good rally in 2019, from A$0.28 to the high of A$0.77, translating to a return of 175% in just five months. This strong trend is continuing as of now as depicted by the 21-day moving average. The average is acting as good dynamic support for the stock, and therefore, it becomes more reliable. As long as the stock is trading above its average, the trend is considered to be positive.

Some of the cannabis stocks in the portfolio are, Harvest One, Cannabis Access, Weed Me, Fire & Flower etc.

The company is well focused on providing the shareholdersâ value with the benefits of operational scale and investment experience. The company gets access to private market deals and resulting IPOs which Australian retail investors cannot access themselves.

Its strategic partner; Embark Ventures would help the company to manage cannabis investments.

On the technical front, the stock is in full gear to break is falling trendline, which was acting as resistance from a past few months. However, the trendline has not been broken yet, but on Friday during the day stock was trading above the trendline.

The volume on the day of strategic partnership announcement (7th June 2019) was quite high at 1.8 million, and a higher volume above this was seen only back in March 2019.

If the stock unable to breach its trendline, the smooth downtrend will continue, and the trendline will become more credible.

EXLâs subsidiary Elixinol LLC into a strategic partnership with RFITD Holdings via a new entity Infusion Strategie, LLC. Elixinol to own 60% and the remaining 40% by RFI. The new entity is expected to increase EXLâs reach in in the CBD- Infused dietary supplement, nutraceutical, F&B industries via distribution to RFIâs customers.

Further, in order to accelerate the expansion in the US, the company raised A$50 million from institutional placement. With 12.8 million or 10.3% of the companyâs issued shares at A$3.90 per share, the placement closed on 3rd June 2019.

On the weekly chart, the stock has been correcting for a couple of weeks. At the top of the trend, the stock has made a three black crows candlestick pattern. It is a bearish reversal pattern and turns the prior uptrend to downtrend. There is support around A$3.6 wherein the stock may halt its downtrend