The below-mentioned two stocks have been reporting good operational growth and are aggressively pursuing future growth opportunities. Let’s take a quick look at these stocks and their key developments.

A leading global provider of proactive performance management software for communications ecosystems, Integrated Research Limited (ASX: IRI) is currently in the early stages of preparing its financial statements for the year ending 30th June 2019 (FY19). After witnessing a 26% profit growth in the first half of FY19 as compared to pcp, the company is now ready to witness record profits in the full year.

In an announcement made on Monday, 15th July 2019, the company announced that for FY19, it is anticipating record revenues and profit after tax. Despite the release of this news, the stock price of the company decreased by 15.652% during the day’s trade.

With regards to licence sales, the company projects its licence sales in FY19 to be in the range of $61.5 to $63.0 million, representing 17% to 20% growth with the strongest performance driven through the company’s payments product line.

In April, the company announced the appointment of highly experienced Mr John Ruthven to the position of Chief Executive Officer, making a significant addition to the company’s management team. Mr Ruthven is an internationally experienced software industry executive with over 20 years of experience in the technology industry and a proven track record of leadership.

In the first half of FY19, the company announced a record first half results with profit after tax rising by 26% to $11.7 million as compared to pcp. Further, total revenues increased by 10% to $50.3 million and overall licence sales increased by 22% to $31.3 million in 1H FY19. 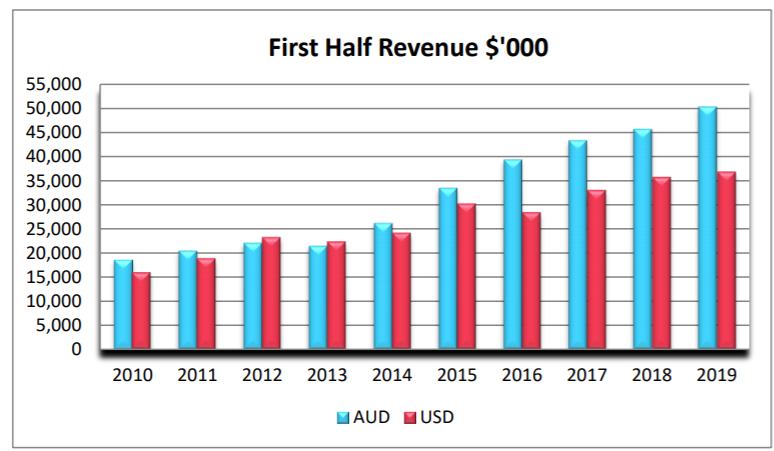 With the introduction of early cloud products, such as UC Assessor and Skype for Business On-line Troubleshooting, the company introduced a new line of revenue in the half year period. The revenue from these new products was relatively small at $286,000 for the half, however, the company sold over $1 million in subscription bookings, which will be released in future periods as the service is delivered.

In Q2 2019, the company reported strong unit sales growth with DyeVert™ unit sales of 2,922, up 64% over the prior corresponding period (pcp), with quarter-on-quarter growth accelerating to 18%. Since the inception of DyeVertTM, the quarterly unit sales have increased significantly, as depicted in the graph below. 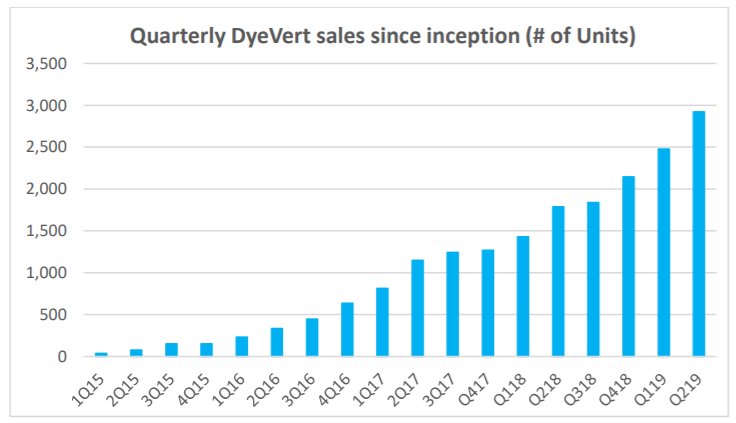 The DyeVert Plus EZ system continues to show strong acceptance by the clinical community, with approximately 77% of Osprey’s DyeVert unit sales now Plus EZ (59% in 1Q 2019).

The company is focused on its strategy of driving sales through contractual relationships with the US multi-hospital systems referred to as Group Purchasing Organisations or GPOs. Further, the company has directed a stronger sales focus on volume penetration within existing ordering accounts. Accordingly, 93% of 2Q 2019 revenues were from existing accounts and 7% from new accounts.

The company continues to expand its hospital footprint during the quarter. The total number of hospitals who have purchased the DyeVert system grew by 19% over the pcp to 147 hospitals. At the end of Q2 FY19, the company had 26 hospitals in the evaluation-to-purchase stage, reflecting a strong pipeline of future customers.

The company currently has four GPO contracts in place, representing 50% US market coverage of the addressable chronic kidney disease (CKD) patients undergoing a coronary angiogram and therefore, are at risk of a contrast-induced AK.

During the second quarter of 2019, the company reported cash receipts of US$990k, up 65% over the pcp. Further, cash outflows from operating expenditures increased 1% versus the pcp and were down 19% as compared to 1Q 2019. The company reported net cash used in operating activities of US$3.8 million, which was 25% lower than 1Q 2019 and 10% lower than pcp. The company expects cash burn to continue to moderate as territories become more established and GPO traction continues to grow.

At the end of the second quarter, the company had a strong balance sheet with no debt and a cash balance of US$16.3 million.

The company has been focusing on driving unit sales and new agreements with GPOs, further penetrating existing customer accounts and growing its field sales representatives.