A Look at Four Penny Stocks That Are Up on ASX Today - BIT, FRX, EDE, OSP

Although the S&P/ASX 200 Index closed the trading lower by 0.3 per cent today, few of the penny stocks moved in the opposite direction with a rise in their stock prices. Let us have a closer look at these stocks trading on ASX:

An Australian-headquartered biotechnology company, Biotron Limited (ASX: BIT) is engaged in the development of a new class of antiviral therapies. Biotron has a robust preclinical pipeline that includes its lead compound, BIT225, which is currently in Phase 2 development for the treatment of Hepatitis C virus infections and HIV-1. 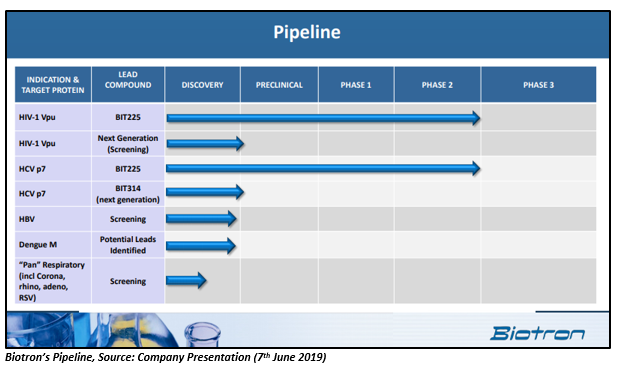 During the first half of FY19, the company delivered positive human clinical data from the Phase 2 trial of BIT225 in HIV-infected patients when used in combination with current antiretroviral drugs. BIT225 had an intense effect on a source of the virus when used with current antiretroviral drugs. The Phase 2 trial data indicated that the antiviral effect of BIT225 resulted in reduced macrophage-specific immune activation (sCD163) and significantly delayed decline in activated CD4 cell levels.

The company’s stock closed higher on the ASX today at AUD 0.084, up by 3.7 per cent relative to the last closed price. Around 12.32 million shares of the company were trading on ASX today with a market capitalisation of AUD 48.25 million. The stock has generated a negative return of 29.57 per cent on YTD basis. However, it has delivered a huge return of 305 per cent in the last one year.

Flexiroam Limited (ASX: FRX) provides mobile virtual network globally and leads in offering borderless data connectivity. It was officially launched in Malaysia in March 2019 and achieved more than 390 partners in over 70 countries by July 2018. The company aims to offer data anywhere to all mobile users so that they can have seamless data connectivity at all times through the company’s virtual infrastructure.

Flexiroam released its 2019 Annual Report on 28th June 2019. The company mentioned in its Annual Report that its subscribers grew 98 per cent as at the end of FY2019 to 260,000 in comparison to the subscriber base of 131,000 at the end of FY2018. The company informed that it has developed a pipeline to reach out to ~35m global travellers after securing the collaboration agreement with Malaysia Airlines and other airlines affiliates during FY19.

The 2019 Annual Report highlighted that the revenue of the group increased by 100 per cent to $5.93 million in FY2019 relative to the FY2018 revenue of $2.97 million. This was due to its marketing effort and effective sales to increase its subscriber base. The gross profit of the company improved by 88 per cent to $2.63 million during the period.

FRX closed the trading session higher at AUD 0.014 today with a rise of 16.67 per cent in comparison to the last closed price. The stock reported a 52-week high and low value of AUD 0.071 and AUD 0.012, respectively. The stock has delivered a negative return of 76 per cent, 70 per cent and 63.64 per cent in the last six months, three months and one month, respectively.

On 11th July 2019, the company made two big announcements on the ASX which are as follows:

A US-headquartered company, Osprey Medical Inc (ASX: OSP) is working towards making heart imaging procedures safer for patients with Chronic Kidney Disease. The technology used by the company helps in lowering hospital costs and reducing contrast-induced AKI (Acute Kidney Injury). The chances of AKI increases due to the dye used during angiographic imaging procedures. The company’s technologies are designed to monitor the dose of dye real time and minimize dye usage during the procedure.

In an announcement on ASX today, the company appreciated the recent step taken by the US President to transform kidney care for over 37m Americans suffering from kidney disease. The President’s initiative involves better diagnosis, preventative care and treatment of kidney patients in order to prevent kidney failure. According to the company’s CEO, Mike McCormick, the President’s move is likely to enhance the awareness and education of kidney disease, mainly around preventative strategies.

Osprey experienced strong unit volume and revenue growth during the 2018 financial year. The company reported a net Loss after tax of US$17.5 million. However, the revenue of the company improved by 54 per cent to US$2.5 million in FY2018. The cash balance of the company was at US$25.2 million as on 31st December 2018. 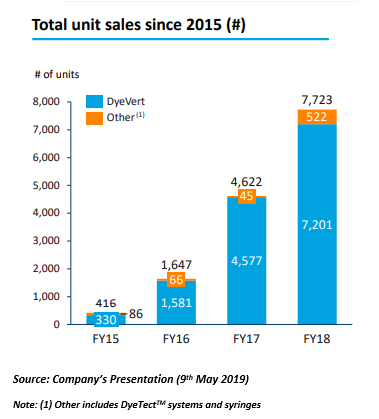