Long-term investors hunt for stocks that have a robust business model with a stable business nature. These companies tend to survive during the economic slowdown and protect the investor’s portfolio on a long-term basis. Historically, these stocks have a good dividend yield, and, in many cases, investors re-invest the dividend for buying the same stock.

Let’s discuss some stocks that can be considered good for retirement, owing to their annual dividend yield of more than 4%, as on 26 September 2019.

Transurban Group (ASX: TCL) is an integrated transport company that specialises in developing, operating and maintaining toll road assets across Australia and North America. The business is also engaged in financing toll road projects and has both corporate and government clients under its portfolio.

Sydney- Toll revenue grew by 10.4%, which included New M4 and additional M5 West interests. However, large vehicle traffic during the year was impacted by reduced construction activity in Sydney. Toll revenue contribution for Sydney in the company’s total revenue stood at 40.4%, while EBITDA margins reached 82.0%.

Melbourne- In Melbourne, the company witnessed a 5.5% growth in large vehicle traffic, higher than car growth, while weekday traffic on Southern Link was impacted by continuing congestion and disruption, particularly during the second half. Income was affected by lower fees, while the business reported positive customer growth. The business has work in progress for projects like West Gate Freeway widening and Port-to-City portions of WGTP. The segment contributed 31.5% to the total revenue, while its EBITDA margins stood at 88%, owing to lower fees as a result of customer initiatives and increased non-cash maintenance adjustments.

Brisbane- TCL registered a marginal ADT growth of 0.4% in Brisbane, due to disruption from LEP, GUN and Pacific motorway upgrade. However, ADT growth was reported at 3.2% excluding Logan and Gateway motorways in Brisbane. Large vehicle segment grew by 2.3%, higher than the car growth. Toll revenue for Brisbane was impacted by a reduction in fees, with a positive outcome for customers. HCV tolls on Logan and Gateway increased to 3.07x car tolls and progressively to up to 3.46x. This segment contributed 15.6% to the total revenue, and its EBITDA margins stood at 73.1%.

North America- Greater Washington Area witnessed a growth of 19.1% y-o-y in toll revenue, while revenue from 95 Express Lanes USD toll registered an increase of 14.2% y-o-y. Toll revenue from 495 Express Lanes USD grew 5.3% from FY18. The segment witnessed strong A25 ADT growth of 6.0%, contributing 12.5% to the total revenue. Financial close reached and major construction started on Fredericksburg Extension project. As per the work in progress, 395 Express Lanes commissioning is underway and is expected to complete within late 2019.

Organic occupancy during FY19 grew marginally at 1% across both Australia and New Zealand, resulting in the Australian portfolio occupancy to 81.4% and New Zealand to 85.7%. The business witnessed higher occupancy at or more than 80% in more than 60% centres while more than 17% of centres were trading at or over 90%. The occupancy in Western Australia grew by ~5% in FY19 and as this number continues to build, NSR’s overall occupancy likely to improve in coming quarters.

During FY19, the company introduced an automated auditing system which helps to improve accountability and performance of the entire organisation. The business also improved technology during the period, with new enterprise data warehouse for stronger data analytics and enhanced cross-functional insights and accountability. NSR introduced enhanced marketing systems and processes with an improved new website, which would be launched in the coming quarters. The company also updated its marketing strategy and designed it to maximise the performance of digital assets.

The company announced its acquisition status of entering into exclusive due diligence over eight assets with a total NLA of over 38,000sqm for in excess of $126 million since 1 July 2019. In addition to this, NSR has approximately $100 million of further acquisition prospects within the pipeline. The company also reported to have 13 development and expansion projects underway and at various stages of completion.

Scentre Group (ASX: SCG) owns and operates living centres under the name Westfield in ANZ (Australia and New Zealand). The company has interests in 41 centres, which cover ~11,500 outlets and total AUM (assets under management) of $54.6 billion. 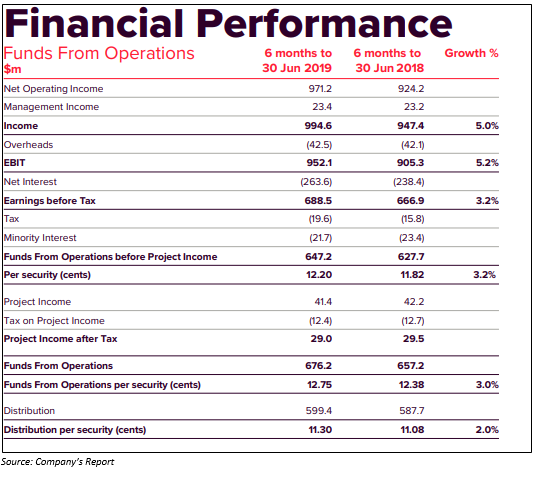 As per the balance sheet, the company reported total current assets at $1,235 million including $693.6 million of cash and cash equivalents, $225.3 million of derivative assets and $233.7 million of receivables. The group reported total investment properties at $34,324.7 million and equity-accounted investments of $3,050.5 million.

The company reported higher occupancy rate at 99.3% while comparable net operating income increased by 2.3% for the half year. During H1FY19, SCG introduced 118 new brands while the business witnessed growth in 117 existing brands. Moreover, Scentre Group reported its total active developments at $835 million, consisting SCG share of $413 million. Work-in-progress across the NZ segment stood $790 million in Westfield Newmarket in Auckland and is expected to complete within the fourth quarter of the current financial year.

The company expects to register FFO growth per security of nearly 0.7%, including the impact of the transactions declared during the first half of FY19. The forecast excludes expected positive earnings impact of a maximum of $800 million from its security buy-back program. SCG also highlighted the distribution estimates for FY19 at 22.60 cents per security, a growth of 2% on pcp.