Transurban’s FY19 Results Out; A Look at Three Other Stocks in Industrial Space – BXB, AZJ, CIM

Transurban Group (ASX: TCL), one of the largest toll-road operators across the world, designs roads that deliver real and long-term benefits to cities and their communities. At present, the group has 17 toll roads in Australia (Brisbane, Melbourne and Sydney) and North America (Greater Washington Area and Montreal). The group is persistent in seeking ways to make travelling convenient for people by using technology to build more efficient roads and create a better customer experience.

Lately, Transurban Group has released multiple updates on the Australian Stock Exchange, including its FY19 results, M5 West Acquisition, distribution guidance for FY20, a $500 million Placement and SPP (Security Purchase Plan). Let us take a look at each one of these updates in some detail:

Statutory Results: The group reported a rise of 26.3 per cent in its statutory revenue from ordinary activities to $4,166 million in FY19 (FY18: $3,298 million). The Net profit of the group declined by 63.7 per cent to $170 million, while the EBITDA improved by 21 per cent to $1,996 million. The 21 per cent rise in EBITDA comprises of $109 million increase driven by toll revenue growth, and lower cost growth net of other revenue, and $238 million increase impacted largely from A25 and consolidation of M5 West. 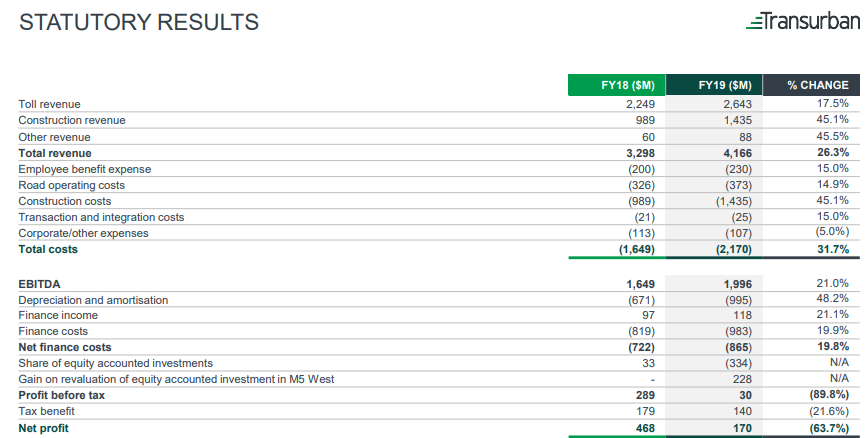 Proportional Results: The group’s proportional toll revenue rose 10.3 per cent in FY19 to $2,581 million from $2,340 million in FY18. The increase in toll revenue was driven by traffic and revenue growth across the existing Australian and North American networks and an increase from new assets and higher ownership in M5 West. The proportional EBITDA excluding significant items also improved by 12.3 per cent to $2,016 million during the period.

The group informed that it has acquired the remaining 34.62 per cent minority interests in M5 West, funded by a ‘pro-rata’ institutional placement and Security Purchase Plan. The 34.62 per cent interest has been acquired for $468 million, taking the group’s total ownership to 100 per cent. M5 West is an existing asset of the group with a 27-year operating history. The group expects the acquisition transaction to be cash flow free and value accretive by ~3 cents per security (including equity raising) in FY20, reinforcing distribution free cash coverage.

The group informed that the 100 per cent ownership enables:

To fund the M5 West’s complete acquisition, the group will raise capital under the Placement and Security Purchase Plan whose details are mentioned below:

As announced on 8 August, the group has raised $500 million (1.3 per cent of total outstanding securities) through a fully underwritten ‘pro-rata’ institutional placement at an offer price of $14.70. The placement price represents 3.48 per cent discount to Transurban’s closing price of $15.23 on 6 August 2019. The group mentioned that new securities issued under the Placement will rank equally with ordinary securities from the date of allotment. They are not entitled to the FY19 final distribution of 30.0 cents per security.

The group also has a Security Purchase Plan (SPP) in place for raising a capital of up to $200 million. Under the non-underwritten SPP, the eligible security holders will be offered to subscribe for up to $15k of new securities per security holder, free of brokerage and transaction costs. The new securities will be issued at the 2 per cent discount to the 5-day Volume Weighted Average Price of the group’s securities up to the SPP closing date or the Placement price, whichever is lower. 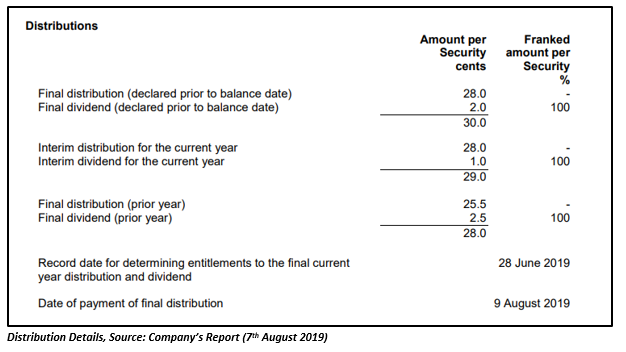 In order to strengthen the communities through transport, Transurban provides sustainable transport solutions that offer choice, reliability, safety, transparency and value. Besides Transurban, there are many other industrial companies listed on the ASX that are also catering to the infrastructure space. Let us take a look at few of these companies below:

Sydney-headquartered supply-chain logistics company, Brambles Limited (ASX: BXB) manages the largest pool of reusable crates, pallets and containers across the world. Globally, the biggest brands trust the company to assist them to transport their products more sustainably, efficiently and safely.

In June this year, the company entered into a binding agreement with Triton and a subsidiary of the ADIA (Abu Dhabi Investment Authority) for the sale of its IFCO reusable plastic containers business for an enterprise value of US$2.51billion.

During the nine months of the year ending 30 June 2019, Brambles anticipates its sales revenue from continuing operations to be at US$3,409.0 million, 7 per cent up on the pcp at constant FX rates. Brambles expects a modest improvement in constant-currency Underlying Profit growth in FY19.

On 26th July 2019, the company informed through an ASX update that an appeal has been lodged by customers challenging the Supreme Court of Queensland’s decision that came in favour of the company for the Wiggins Island Rail Project. In June 2019, Supreme Court of Queensland confirmed Aurizon’s ability to charge regulatory fees opposed by customers under the project. Aurizon notified that it is considering the appeal and will reply as per the Court of Appeal instructed timeframes.

The group has recently announced a fully franked dividend amounting to 71 cents for a period of six months, payable on 3rd October 2019. The ordinary fully paid dividend carries a record date and ex-date of 12th and 11th September 2019 respectively. 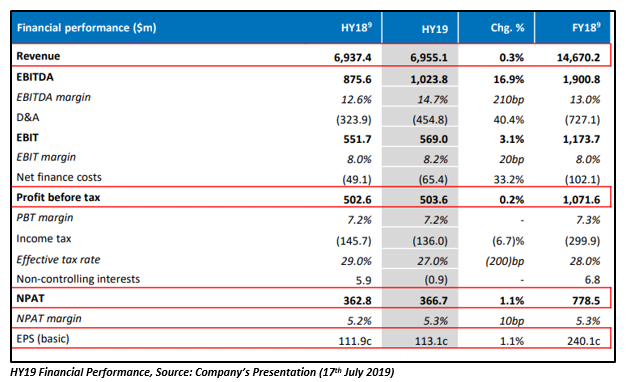 CIM is currently trading at AUD 33.015, down by 1.74 per cent compared to the last closed price. The stock has delivered a negative return of 21.44 per cent on a YTD basis.