Immigration has been a vital defining element of Australia’s social and economic life. The country is an incredibly popular destination specifically for skilled migrants and under family re-union programs.

Australia is often referred to as the nation founded on immigration. Evidence exists to suggest that immigration began in Australia thousands of years ago when ancestors of the Indigenous Australians stepped into the Aussie land from Southeast Asian island and New Guinea.

Australia has had a long and healthy tradition of resettling migrants, refugees and vulnerable communities on humanitarian grounds. Consequently, driven by government support, a robust legal system and a plethora of opportunities in the country, migrants have been known to make extraordinary contributions and become outstanding members of the Australian society.

People move to Australia to savor the high-quality lifestyle that the country offers, low pollution levels, the beautiful climate and geography, abundance of business opportunities and the constantly upgraded and well-advanced education system and courses that universities offer.

Now that we have entered a new decade, let us scan over the immigration system in Australia and how it works.

How Does Migration to Australia work?

Migrating to a foreign land not only is a huge step in one’s life but requires an ardent approach and efficient decision-making skills. Below is a basic guide that an ambitious foreigner ideally follows to migrate to Australia (for a skilled migration visa)-

Migrants come to Australia for a variety of reasons and for different lengths of time. This calls for a robust framework in place, and The National Settlement Framework works in partnership with the three levels of government to effectively plan and deliver services that support the settlement of migrants and new arrivals in Australia.

Australia has three levels of government- the commonwealth (or federal), state or territory, and the local, which provide services for both migrants and residents. Besides this, Australia is renowned for offering world-class settlement services to migrants.

The National Settlement Framework aims to-

Historically, more people used to immigrate to, than emigrate from, Australia, consequently adding to the overall growth of the national diverse population.

According to the Australian Bureau of Statistics (ABS), elevated levels of immigration prior to 1891 caused 32% of the Australian population to be counted as overseas born (in the first ever country wide census of 1891).

Now that we understand the immigration scenario in Australia, let us look at a few statistics that would help us comprehend its actual trend- 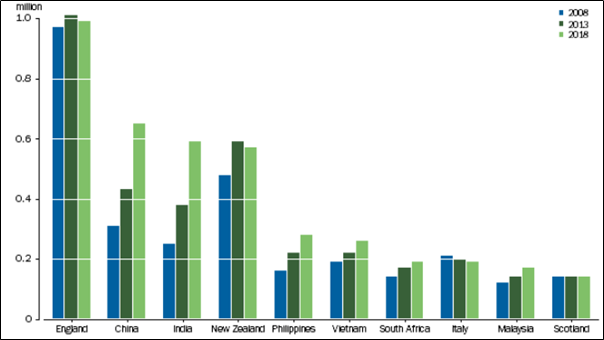 What Do Experts Suggest?

According to the ABS, as on 7 February 2020, AU’s resident population is estimated to be 25.59 million. Few research reports suggest that at the on-going rate of immigration in Australia, the country’s population is likely to reach approximately 40 million by the midpoint of the present century.

Experts believe that the Australian government is increasing the number of visas for skilled workers willing to migrate to the country’s regions to ease the pressure on major cities (where the population clock is rapidly ticking). This would, in turn, support other regions that would contribute to the economy better than they are now.

Reportedly in January 2020, new migrants (especially from China and India) moving to capital cities and major regional centres have continued to help boost house prices after the country started recovering from an over two-year housing downturn.

Migrants add substantial value to consumption and spending in Australia which drives economic growth and government revenue, keeping the overall economy on a development trajectory. The future seems bright, with advancement in businesses, better demand of living standards and increasing education and work opportunities in the country.