What makes Australia Rank Amongst Top 20 Countries in the World?

Well above its weight across a comprehensive range of measures against global counterparts, Australia is categorised under top 20 countries of the world, which has abundant wealth and strong economy, with comparatively high per capita income and gross domestic product.

It is imperative to note that the nation has continued its 29 year stretch of continual economic expansion in 2019, particularly driven by the export of commodities and the service sector. The country’s outstanding performance across a wide range of indexes has enabled it to become a top 20 world country.

Let us understand how Australia is placed in the world’s top 20 elite club:

Continuing a period of 29 years of annual economic growth with no recession, the nation is one of those few economies that has achieved this milestone post World War II. Australia’s positive economic performance is driven by the country’s robust macro policies, flexible labour markets and favourable business investment.

As per the International Monetary Fund, in US dollar terms, Australia has the world’s 14th highest GDP and 11th highest GDP per capita. Moreover, the Investment Company Institute believes that the nation has world’s 6th largest pool of investment funds under management.

Credit Suisse in its Global Wealth Report 2018 also reported that Australia is the wealthiest nation with regard to median wealth per adult, surpassing Switzerland. In addition to Australia and Switzerland, the the top ten countries in the wealth-per-adult league, included Denmark, New Zealand, France, Belgium, Singapore, Norway and the US.

These rankings by different organisations validate that the strong economic position of the nation in the international market.

Take a look at the key economic indicators snapshot released by the RBA on 10th January 2020: 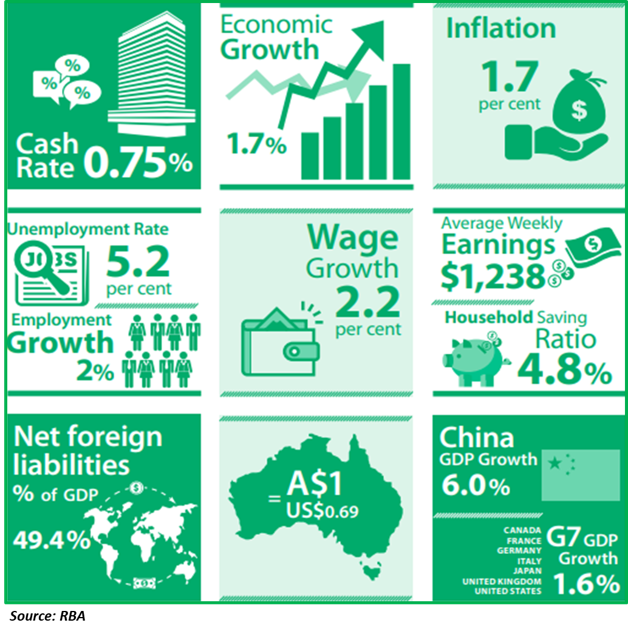 The Australian economy’s robustness is sustained by strong institutions, solid policy frameworks and particularly, deep trade ties with the Asian region and an attractive investment environment.

As per recent ABS estimates, Australia’s beef production improved to 210,300 tonnes in November 2019, rising by 1.2 per cent relative to October 2019 and 8.9 per cent in comparison to November 2018. Moreover, the nation recorded a solid trade surplus of $5.8 billion in November 2019.

The country’s position in the international trade in different categories is summarised in the below table: 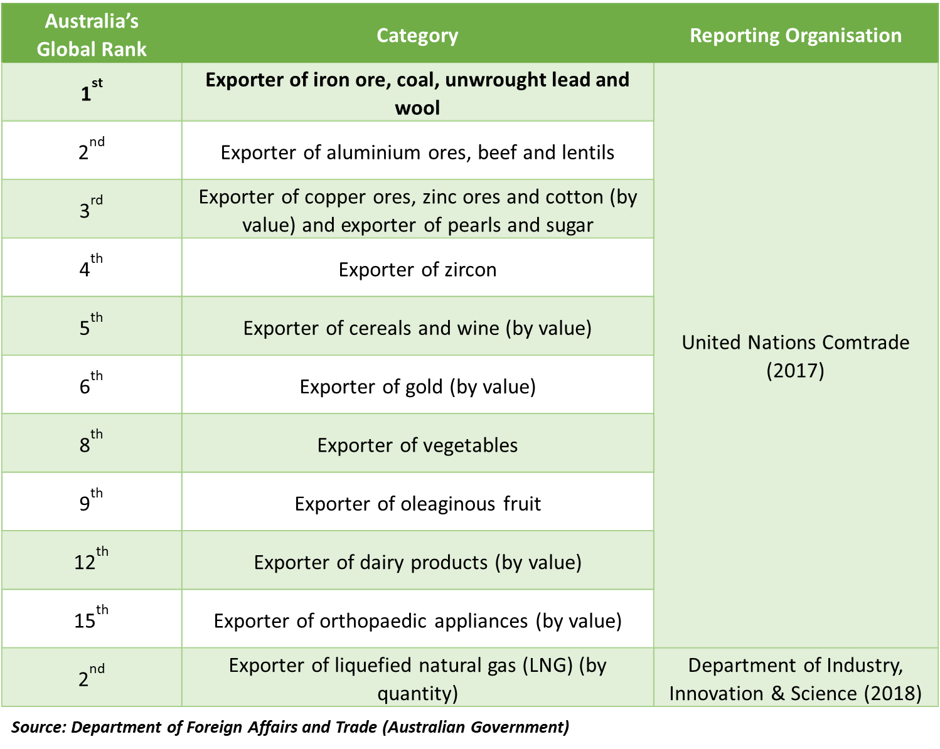 Besides international trade, foreign players consider Australia as an ideal partner for investment and collaboration. A report by Austrade highlighted that 8 of the top ten Forbes Global 2000 firms and 9 of the top 10 Fortune Global 500 firms have operations in Australia.

As per the United Nations, Australia received the eighth largest international tourist spend from overseas visitors in 2017. Moreover, UN reported that the Australian investors contributed the 17th highest amount of outward FDI across the world (based on FDI stocks) and Australia attracted the 14th largest amount of inward Foreign Direct Investment (FDI) in 2018.

Australia is also considered as a leading education provider as it attracts students across the world to its research and development institutions and globally ranked universities, that focus on producing and commercialising new ideas.

As per Austrade, Australia is the third most popular destination for higher education across the world. In 2018 Academic Ranking of World Universities, Australia attained the 3rd spot for a number of universities in the world’s top 100. Six universities of Australia were categorised under the top 100 list, including:

In addition, the nation received 4th rank in 2017-18 World Economic Forum Global Competitiveness Index for secondary education enrolment rates. Pearson gave 15th rank to the nation for having the best education system in the world in 2018.

Read the Linkage between Education and Employment in Australia Here

One of the World’s Best Health System

The Australian health system is counted amongst one of the best health systems of the world, which offers affordable and safe healthcare to all Australians. The best part about the nation’s health system is that it is jointly run by all levels of the government: state, federal, local and territory.

OECD Regional Well-being 2018 statistics revealed that Australia stands at the first position for well-being, with its three states in the top 10 regions, including Australian Capital Territory, Victoria and Western Australia.

In addition to these factors, the country holds a strong position in terms of ease of doing business, global citizenship, geography and biodiversity and governance and human development. Recently, the country attained 6th rank in the Human Development Index released by the UN for 2018.

In a nutshell, Australia is widely recognised as a growing economy with a comparatively low unemployment rate, expanding GDP growth and highest minimum wages. With one of the world’s best health and education systems, the Australian cities have significant rankings under the world’s best cities to live in.