Why Did IMF Downgrade Global Economic Growth for Consecutive Years?

With the global economy not showing any signs of immediate optimism, the International Monetary Fund (IMF) has slashed down global growth forecast in 2019 and 2020 by 0.1 per cent each, a slight downward revision to its previous World Economic Outlook (WEO). By this international organisation of 189 countries, global growth for 2021 has been revised down as well, by 0.2 per cent.

IMF’s WEO reports are well-pursued across the globe for its in-depth analysis of economic forecasts and events that linger over countries alike. They for a robust basis for companies, economies and industry experts to formulate their respective reports.

Let us browse through the global growth forecasts made by IMF in the last few (and latest) WEO reports and decipher the improvisations (downward or upward): 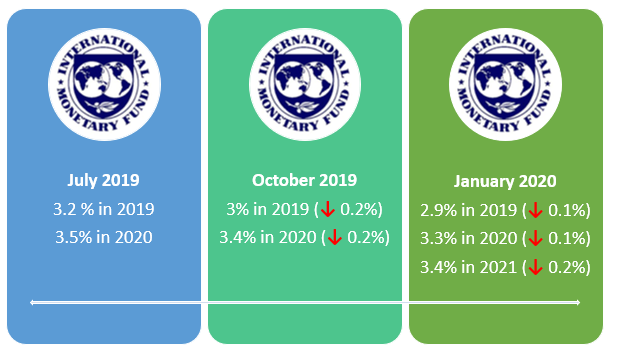 What Does IMF’s Recent WEO Say?

As per IMF’s Gita Gopinath, the predicted recovery for international development continues to be doubtful.

In the latest IMF Blog released on 20 January 2020, the organisation’s Economic Counsellor and Director of the Research Department, Gita Gopinath informed about the slight downward revision in the global growth for three consecutive years.

Further, she discussed the on-going prolonged trade war between two of the world’s biggest economies, US and China. Interestingly, the recent WEO was released four days after both the economies finally signed the Phase I Trade deal, that suggests some signs of health in the heated war. IMF believes that the US-China Phase I deal, can alone reduce the cumulative negative impact of trade tensions on global GDP from 0.8 per cent to 0.5 per cent by end 2020, if it is durable.

To understand the reasons of IMF’s recently downgraded global growth forecast, it is vital to acquaint ourselves with the economic events that encircled us in 2019-

The year 2019 presented a roller coaster ride for the global economy. In a nutshell, trade war continued to create further doubt for policymakers and businesses.

Trading goods across borders remained tensed, especially driven by the US China trade war and tariff constraints. In the Eurozone, uncertainty associated with global trade tensions and Brexit continued to make businesses and share markets nervous. This consequently had an impact on other economies, given the interdependency of businesses across the world.

Countries faced the need to control debt levels and emerging market currencies were constantly under periodic pressure. Moreover, Labour markets in advanced economies continued to tighten with slow job creation. Unemployment was a trigger that worried economies alike. This was linked to population- which evidently continues to grow.

Coming to another factor which is feared by every economy pertains to climate change. 2019 was perhaps the one of the ten hottest years ever recorded in history, an issue published by PricewaterhouseCoopers International Limited stated. Global greenhouse gas emissions are producing record-breaking soaring temperatures. The consequence of climatic imbalance and degradation was seen in the beginning of this new decade, wherein the unprecedented bushfires claimed human lives, destroyed structures and killed millions of animals in Australia.

Why Did the IMF Downgrade Global Economic Growth?

Tentative stabilisation and sluggish recovery was predicted by the IMF at the back of the events mentioned above. But why? Let’s find out-

What Should Economies Do?

The IMF does acknowledge the fact that some global risks have partially receded with possibility of a no-deal Brexit and signing of the Phase I trade deal. Central banks are on their feet to adhere to comforting monetary policy to support growth. But with recovery for global growth uncertain, what should economies focus on?

Even though the global outlook remains sluggish, the signs of stabilisation should be maintained and eventually lifted to make businesses and economies prosper. Multilateral cooperation and national-level policies, if in place, can boost global economic growth.