As defined by the World Health Organization, the health system constitutes all those activities that are aimed at promoting, restoring and maintaining health. A health care system provides services that contribute towards the health of the individuals. The healthcare organisations across the world are competing with well-maintained facilities to deliver quality medicines and technologies, a robust financing mechanism, reliable information on which decisions and policies are made and a well-trained and adequately paid workforce.

The Australian healthcare system is a complex mix of public the private healthcare system. Anyone needing healthcare could access it through either one of the systems or use a mix of both. The public system is largely owned and governed by state and territory governments in Australia. On the other hand, the privately-owned and managed health service providers come under the private system. In the public system, the responsibility for the publicly funded universal health care system, Medicare lies with the Australian Government. However, the local government plays a substantial role in the promotion of health activities and public health. Besides this, the local government delivers community-based health and home care services.

As per the data provided by the Australian Bureau of Statistics on National Health Survey (NHS) 2017-18, more than half of Australians over 15 years of age considered themselves to be in ‘excellent’ or ‘very good health’ in 2017-18. However, ~15 per cent of them reported to be in ‘fair’ or ‘poor health’.

It was observed that about 47.3 per cent of the Australians had one or more chronic conditions, with 4.8 million people reporting mental and behavioural conditions, and 4 million people experiencing back problems in 2017-18. The percentage of people reporting ‘high’ or ‘very high’ levels of psychological distress increased from 11.7 per cent in 2014-15 to 13 per cent in 2017-18.

Let us now have a look at two of the healthcare stocks that are listed on the Australian Stock Exchange (ASX):

In an announcement on the ASX today, the company informed that it has sold its 85 per cent shareholding in Hamburg-headquartered GLP Systems GmbH to US-headquartered Abbott. The remaining 15 per cent interest in GLP has also been acquired by Abbott, declared Sonic Healthcare.

A cutting-edge laboratory automation system has been developed by GLP with significant assistance from Sonic Healthcare, and it has been installed in eight Sonic laboratories in Germany, the UK and Australia. According to the company, Abbott is the ideal partner for GLP, and GLP’s potential will be more fully realised in the IVD equipment market with the partnership.

The sale will generate an after-tax profit of around ~A$48 million to Sonic Healthcare. Also, ~$A130 million of cash (including shareholder loan repayments and sale proceeds) will be returned to Sonic Healthcare to repay existing Euro debt. This will lead to the creation of additional balance sheet capacity, enabling further laboratory acquisitions.

Sonic Healthcare completed the transaction to acquire 100 per cent of Aurora Diagnostics, LLC in January this year. The company informed about the binding agreement to acquire Aurora for A$750 million in December 2018.

Leading global biotech company of Australia, CSL Limited (ASX: CSL) holds a dynamic portfolio of life-saving medicines as well as vaccines to prevent influenza. The life-saving medicines also include the medicines that treat haemophilia and immune deficiencies. The company provides life-saving products to over 60 countries through its two businesses, CSL Behring and Seqirus.

The company’s financial results for the half-year ending 31st December 2018 were announced on 13th February 2019. The company reported that its revenues from continuing operations improved by 8.6 per cent to US$4.5 billion during the period. However, the total revenue improved by 11 per cent. Also, the net profit after tax attributable to members was up 6.8 per cent to US$1.2 billion. 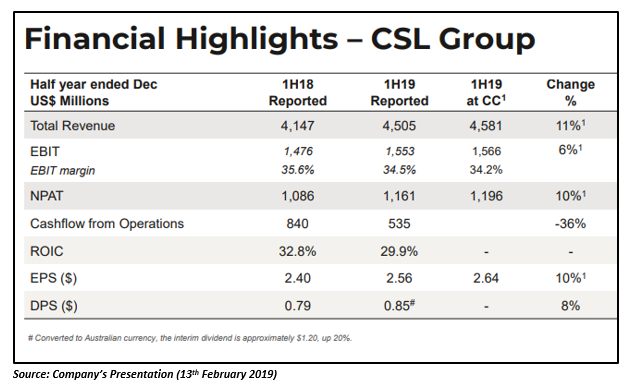 In an announcement on ASX on 21st June 2019, the company updated about its transition to its own Good Supply Practice (GSP) License in China expected in FY20. The company provided an estimate of ‘one-off’ financial effect on the group with the transition. The company informed that the transition would lead to the lower reported albumin sales of ~$340 - $370 million. The company expects its profit effect to remain in accordance with historical CSL Behring margins. There will be a more modest impact on cash flow, and the cash collection cycle will improve under the new model, stated CSL.

Following the completion of the transition, the annual sales of albumin in China in FY21 is anticipated to return to a more normalised level.