The global transformation in mobility- from petroleum fueled vehicles to electric ones, has been a much-discussed topic of discussion on public and private platforms. Experts have been of the firm opinion that electrification is the one true trend which would transform, and eventually disrupt the global automotive industry, especially when we - as conscious citizens and countries- as socially responsible ones, are becoming increasingly wary of the increased de-carbonisation efforts.

One cannot underestimate the profound role that technology plays in our daily lives, and with technology being developed with a simultaneous dip in the production costs, a rather optimistic prognosis for future global deployment of electric vehicles (EVs) is a practical vision.

The Evolution of Electric Cars

EVs are in no way a new concept, and their existence dates back to the mid-19th century. It was in the early 1900’s that electrification rolled out, making early electric car concept famous. The initial electric cars had a productive market for driving across cities. However, the impoverished roads beyond urban centers made it challenging for the initial electric cars to endeavor outside the city limits.

Moreover, the high cost, the short range of battery and low top speed led to a global decline in the use of electric cars even though they were used as electric trains and in other niche uses.

The EV Boom Hits Back

As we stepped into the 21st century, the interest in the EV space bounced back, primarily catalysed by the rising concern over the issues surrounding hydrocarbon-fueled vehicles, environmental concerns (emissions), the sustainability of the hydrocarbon-based transportation substructure and the overall enhancements in the EV technology.

With the strengthening of emission rules in the 1990’s, auto firms shifted their focus increasingly on alternate-fuel vehicles. While, General Motors (GM) presented the EV1 and Toyota brought in Prius, Nissan’s Altra EV minivan and Honda’s Insight were powered by lithium-ion batteries.

In the 2000s and the years that followed, Tesla launched the Roadster sports car, which was the first production EV to use lithium-ion battery cells, and the company went on adding more models with time. Nissan’s leaf was amongst the best-selling electric car.

A major paradigm shift occurred in the 2010’s when China announced its intention to cut smog and oil imports, which created a gigantic global EV market with manufacturers, sellers and customers interested in the cause.

In 2018, the EV global sales surpassed the million units’ figure, as reported by multiple industry experts. China’s EV-sales performance has been quite remarkable in absolute terms, with the market expanding by over 70% in 2017, driven by generous subsidies and tight regulation. Industry experts believe that China leads the global electric mobility, with Germany and Norway holding the baton in the EU. 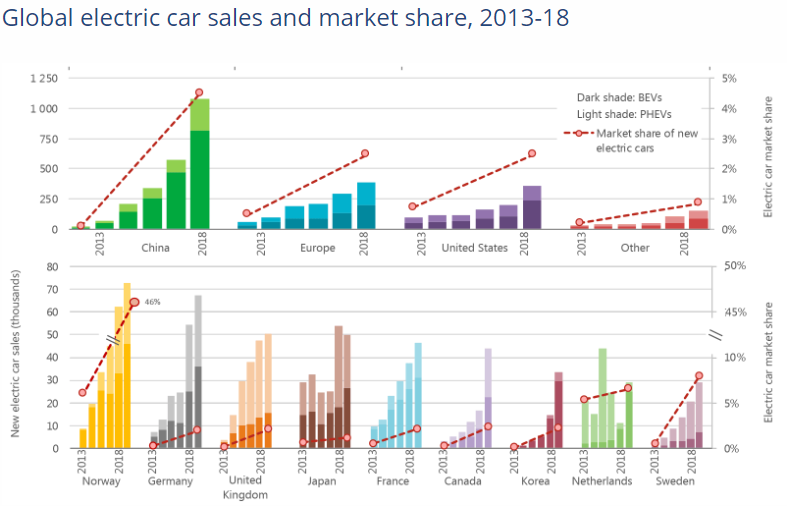 Presently, automobile manufacturers are making massive investments in the electric car division as these cars are well-positioned to disrupt the industry. Moreover, with the environment imperative getting mainstream, global companies are focused on sustainability and green supply chains.

The concept of a circular economy (which involves re-manufacture and reusage of products, which ultimately shuns down environmental and resource strain) is well-fitted in the context of EV’s.

Let us look into a few facts, as laid down by the International Energy Agency (IEA) to understand the current growth trajectory of the EV Revolution, which rightly believed by many, is here to stay:

With the noticeable expansion of the EV space in the current times and the future, it is vital for regulations and the associated frameworks to ensure that electric mobility boosts the flexibility of power systems, and lifts the opportunities for integration of renewable energy resources ,while reducing costs linked with the adaptation of power systems.

The development of the automotive battery production capacity will essentially be dependent on the evolution of EV’s, which would be a pivotal pillar to reduce the unit cost of automotive battery packs. The key feature of EV’s supporting the EV Revolution is that they save more energy than they consume. 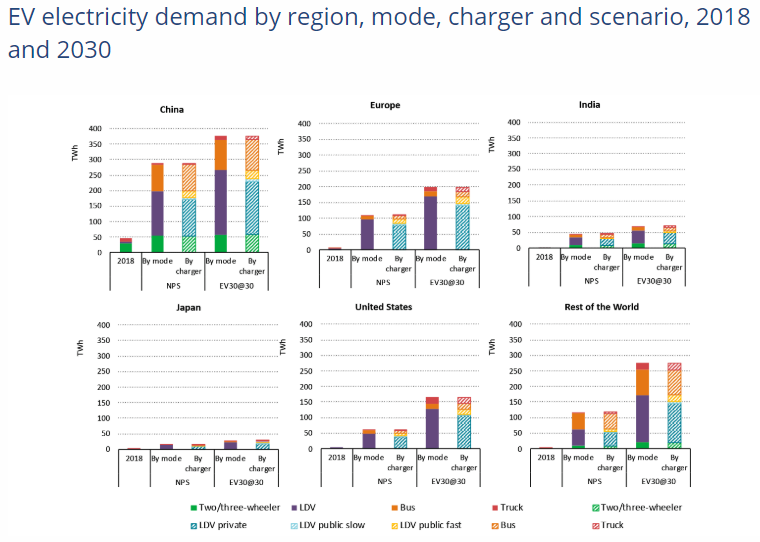 The below facts, as laid down by the International Energy Agency (IEA), prove that the EV Revolution would continue to attract manufactures, supplier and customers:

Sectors Under Focus Amid the EV Revolution

The increased EV adoption will see its impact on multiple industries, natural resources, geographies, and the levels of carbon emissions.

The most impacted sector, the auto industry, is expected to attract several new entrants as the EV Revolution paces up over time. The automobile manufacturers will make notable investments to efficiently and effectively capitalise on the growth of EV’s, as production, sales and usage surges. It should be noted that automakers would continue to sell both conventional as well as EV’s, which would impact the global automotive ecosystem.

Discussing the energy sector, crude oil demand will dampen modestly. However, with internal-combustion-powered vehicles becoming efficient and less predominant, the global crude-oil demand will continue to grow. The demand for natural gas and coal would also increase as more EVs would require paced up electricity production.

Higher EV sales will reduce overall battery costs as manufactures would focus on expansion. There would, however, a pressure hovering over the costs of crucial battery inputs, like cobalt and lithium, for which demand will rise sharply as these metals would be key ingredients in the EV component production.

Land, a real asset, would also get affected as economies would have to build charging stations for the EV’s. This would further impact the retail sector, as large retail-driven charging stations may come to mark the commercial landscape.

As understood, the future does seem bright for EV growth with customers willing to buy EV’s, boosting global sales. With a sea change in attitudes towards EV’s in the past few years, it is safe to say that automotive equipment manufacturers are pursuing the strategies pertaining to EV’s with varying degrees of success albeit fierce competition.

It would be interesting to see the disruption in the EV space with a positive change in customer preferences, technological advancements and government interventions with regulations.