It is believed that stock market investment is not a get-rich-quick scheme, but rather a way to steadily grow the wealth one already has. Over time, equity markets have seen several businesses going public across industries and geographies. Besides, investment in equity markets has proven to be one of the most relied avenues to source and expand income, and this has led to paced up activities on the global stock exchanges.

Today’s article would revolve around an index which is the benchmark for Australian equity performance- S&P/ASX 200 index. We would browse through the index performance in the past few days, but foremost, let us understand the index:

Market cap weighted, and float-adjusted stock market index of stocks listed on the Australian Securities Exchange, S&P/ASX 200 index is maintained by Standard & Poor's. It is based on the 200 largest ASX listed stocks and was started on 31 March 2000. The index is rebalanced every quarter by Standard & Poors. For inclusion in the index, stocks need to pass 3 criteria- Market capitalization, liquidity and listing criteria, described below: 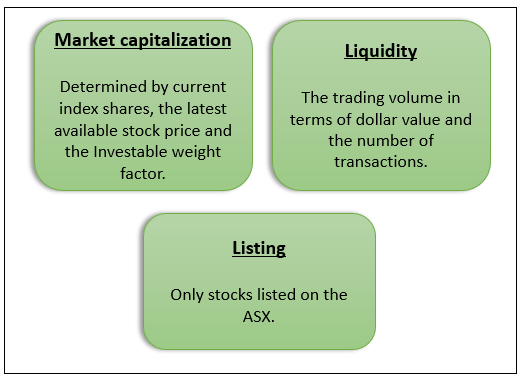 On 19 September 2019, the trade session began higher on the news that Federal Reserve Open Market Committee has cut its benchmark lending rate by 25 basis points to a range of 1.75 per cent-2 per cent, which marks its second interest rate reduction this year. The motive behind the rate cut is to strengthen the US economy in an environment where a global slowdown is gathering steam.

Post the rate cut, the US dollar index bolstered by almost 0.3 per cent.

The Australian equity market was set for a positive open, and the S&P/ASX 200 index was up 0.7 per cent in the early morning trading session.

On the financial front, mid-day, the big four banks were pushing higher. On the much-discussed property front, there was positivity looming amid investors as Chinese buyers were witnessed taking an interest in the Australian property market again.

The tech stocks were marginally gaining traction, with the S&P/ASX 200 Info Tech index was up a sizeable 1.5 per cent.

The S&P/ASX 200 settled at 7-weeks high level at 6717.5, up 0.5 per cent, driven by strong gains in utilities, industrials and telecommunications.

Gainers and Decliners for the day 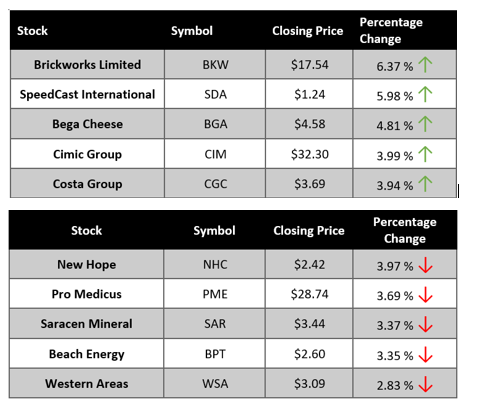 The gainers of the day, that supported and propelled this upward trend were topped by materials player Brickworks Limited (ASX: BKW), riding high by 6.37 per cent at $17.54, followed by communication services company Speedcast International Limited (ASX: SDA), up by 5.98 per cent, quoting $1.240 and consumer staples player Bega Cheese Limited (ASX: BGA), up by 4.81 per cent at $4.58.

The decliners, who would have failed to match up to the investors sentiment and traded low on the day, included Energy firm New Hope Corporation Limited (ASX: NHC), whose stock slumped by 3.97 per cent and quoted $2.42. Following the suite were two companies from the healthcare sector, Clinuvel Pharmaceutical Limited (ASX: CUV), down by 1.52% and Pro Medicus Limited (ASX: PME), down by 3.69%.

How has been the week?

With drone attacks on Saudi’s key oil infrastructure, Abqaiq oil processing facility, ASX-listed energy stocks soared, pulling up the strings of S&P/ASX 200 at the start of the week.

The benchmark further inched up 0.3 per cent on Tuesday.

On 18 September 2019, the energy stocks came crashing down, driving the market down with the Australian energy index declining 1.8 per cent at close. Saudi Arabia assured that the Kingdom would successfully restore the lost oil production by the end of September while industry experts preach constant vigilance in the light of any more possible attacks.

The investors were noticeably cautious of the anticipated US Federal Reserve's rate decision and the key domestic employment data, due on 19 September 2019, that was expected to influence the central bank's monetary policy decision in the days to come.

Continuing the slump, the financial index closed 0.5per cent lower, following suite of the downturn of the Big Four banks on Wednesday. On a slightly bright side, gold shined brighter on the index, up by approximately 2 per cent, with investors flocking to safe-haven asset amid the geopolitical risks in the Middle East.

There were some records that were noticed, with Qantas shares rising over 5 per cent to $6.57 in the early trade hours, which was the highest price since September 2018, though the stock closed at 1.8 per cent higher at $6.28.

Drivers of the S&P/ASX 200 Index Performance

Stock performances are largely dependent on and highly sensitive to macro and micro economic factors, which are dynamic in nature. In the recent times, the Higher unemployment rate, rather the slower jobs growth and the possibility of further rate cuts, along with the slowing consumer spending has been amongst the triggering worries for the Australian economy and has a direct or indirect implication on the investor sentiments as well.

In a much recent spill over, the drone attack on the world’s largest oil infrastructure, Aramco oil sites (Abqaiq–Khurais crude processing facilities) in Saudi Arabia set the market experts anticipating an oil price surge that might be negative for global equities in the near-term.

On the global front, Australian share market is prone to undergo shifts if the US markets stir in any way. Recently, the trade volumes were noticeably light as traders awaited the US Federal Reserve to make its interest rates decision, a likely 25 basis points rate cut.

It would be interesting to watch the trade sessions in the days to come, on the backdrop of humongous economic turmoil and events hovering over the business world.

We are committed to providing our readers with updates on the share market front, with the aim to aid in decision making. We encourage you to stay tuned for more insights and watch this space for everything your investor side needs to be acquainted with.