The S&P/ASX 200 Index closed in Red on 4 September 2019, falling 0.31 per cent (20.4 points) to the current value of 6,553.0. This coincides with the release of the latest GDP figures, by the Australian Bureau of Statistics, that apparently demonstrates the slowest annual growth in a decade for the Australian economy since the global financial crisis of 2008-09.

The biggest declines of the day inlcude Materials sector player, CSR Limited (ASX: CSR) closing at $ 3.710, down 6.55 per cent (AUD 0.260) followed by a 5.34 per cent fall in the share price of Industrials company, Emeco Holdings Limited (ASX: EHL) to $ 1.860. The Information Technology company Bravura Solutions Limited (ASX: BVS) also witnessed a 4.62 per cent slashing in its stock price to $ 4.540.

On the other hand, consumer staples sector company Metcash Limited (ASX: MTS) recorded a 3.53 per cent uptick in its share price to $ 2.930 while the share price of Oil Search Limited (ASX: OSH), from the Energy sector moved up 3.29 per cent to $ 6.900.

Market experts are of varying views concerning the recent disclosure of the Australian National Accounts June 2019 on 4 September 2019, which depicts that in seasonally adjusted chain volume terms, the Australian economy grew by a mere 0.5 per cent in the June quarter 2019 while the GDP growth rate managed to be around 1.4 per cent year-on-year. 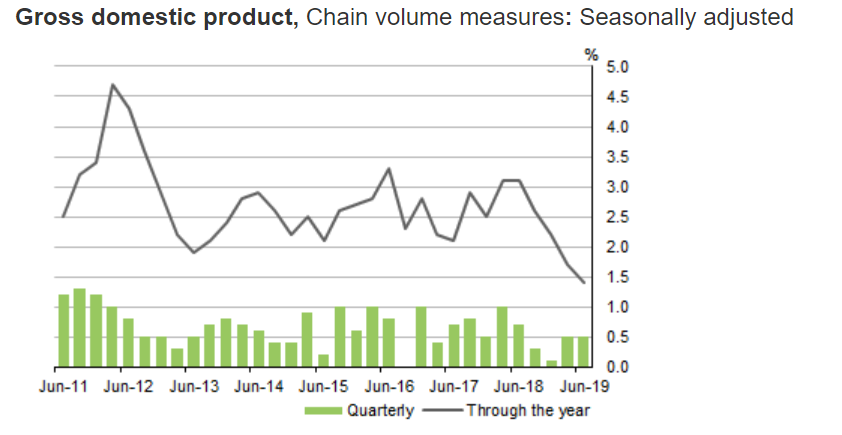 According to the ABS Chief Economist, Mr Bruce Hockman, the domestic economy remained steady during the last quarter and the main stimulus for the GDP growth was the external sector with net exports contributing to 0.6 percentage points to the growth, inlcuding strong exports from the metals and mining sector. This may be attributed to the China's perpetual appetite for Australia's raw material commodities such as iron ore and coal.

Besides, the gross value added for Mining rose by 3.4 per cent on the back of strong production of coal and liquefied natural gas, accompanies by a 10.6 per cent increase in the Mining profits resulting from a consistent growth in exports and a continued rise in the terms of trade. On the other hand, consumption goods saw the largest decline of 2.9 per cent in imports.

Investments in the mining industry, particularly in machinery and equipment, also edged up 2.4 per cent over the quarter.

With a backdrop of weakening global growth outlook amidst the US-China trade tensions and other macro-economic factors along with the reduction in household spending in Australia due to declining consumer confidence, the positive growth rate is actually indicative of strong fundamentals of the Australian economy.

Moreover, the economic growth in Australia over the first half of 2019 was slower than had been anticipated by different economists, as the household consumption was impacted a prolonged period of low-income growth and declining housing prices and turnover. There was only a 0.4 per cent growth in household expenditure and dwelling investment further reduced by 4.4 per cent during the quarter across all states and territories with the exception of Tasmania. Besides, there was a 6 per cent reduction in investments across new and used dwellings in the quarter while the year-on-year growth also reduced by 10.9 per cent, consistent with overall weakness in dwelling approvals.

As household consumption remained subdued and individuals retracted their spending, the major contributor to growth in the domestic final demand remained Government spending, reflecting the ongoing provision of services in disability, health and eldercare. Even so, the household saving ratio was still recorded lower at 2.3.

Some economists believe that although public spending was holding up the GDP and the economy, there was need for additional fiscal stimulus. Currently, the Australian economy is experiencing challenging times amidst a sluggish growth trajectory of the housing sector and slowing down of the global economy as global trade and technology war intensifies.