Is the Market Returning To Safe Haven – Gold & Bonds

Safe Haven sounds a pretty classy term, but financially, safe haven simply refers to relatively safer investment assets. Lately, the burgeoning demand for safe assets has pushed the price levels to the point that the safe assets do not seem to be safe anymore.

To be more precise, the increasing uncertainty in the global trade, geopolitical shocks, and purported emergence of an economic slowdown has resulted in investors turning conservative and accessing bonds to get a safe return on the investments.

As a result, some of the highly-rated sovereign debt issuers have seen their yields falling to negative territory, but a comparatively lower rate is pushing these yields to a lower level in the first place, and the increased uncertainty around the globe has accelerated the pace of falling yields.

Gold is another heavyweight when it comes to Safe Haven, and the return on gold over time depicts the value created by the yellow metal. In addition, the gold ETFs have provided a much convenient route to access investments in gold to take part in the ongoing value creation by the gold, while shielding against the fall in other asset classes.

Presently, it appears as if the existing demand for safe-haven assets is outstripping the supply, or maybe, we need additional safer assets to accommodate jittery investors at times when the escalating uncertainties have been accelerating inflows into safe assets.

In a research paper presented at Jackson Hole Symposium (one amid the longest duration central banking conferences worldwide) by Arvind Krishnamurthy and Hanno Lustig of Stanford University, the global scarcity of dollar safe assets was pointed out. The paper pointed out that the demand & supply of safe dollar assets have impact on the bond yields, exchange rate, and other global financial variables.

The World Gold Council had published the 2019 CBGR or Central Bank Gold Reserves survey in July this year. According to the survey, about 11% of the central banks from emerging market and developing economy had planned to buy gold in the upcoming twelve months period.

Last year, twelve percent of the central banks from emerging market and developing economy out of 155 had bought gold, which resulted in a demand of 651 tonnes of gold from central bank and was the highest level on record in the international monetary system.

During the first half of the year, the demand in gold was sustained due to the reasons like central bank buying gold, and accelerated inflows in the Gold ETFs. In addition, the miners had witnessed a healthy production resulting in a 2% rise in the total H1 gold supply. 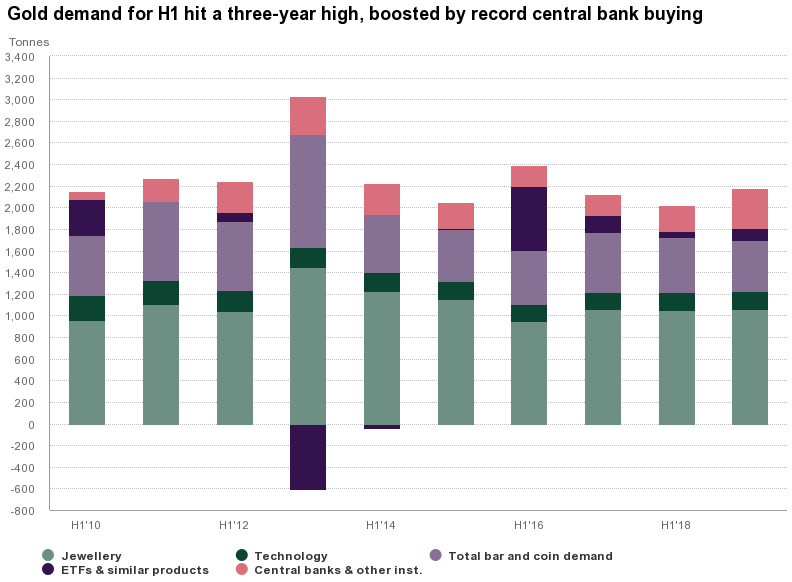 In the second quarter of 2019, the Central Banks bought 224.4t of gold taking the half-year buying spree to a total of 374.1t. Besides, the Gold ETF holdings reached to a multi-year high at 2,548t with 67.2t added in the second quarter. In terms of US dollar, the assets under management in Gold ETFs grew to US$115.4 billion.

Last week, in Europe, the ECB had come up with a recent monetary stimulus to lift a weak economy. The US had delayed tariffs on $250 billion worth of Chinese goods, which was earlier scheduled to impose additional 5% on October 1, has now been scheduled for October 15 this year.

These developments have had helped to suppress some demand in the safe-haven assets, as a result, last week, the bond market yields in Europe witnessed a little upward trend in the long-term denominated debt.

The German 30-Year yield is now yielding positively and rose firmly on last Friday. On Monday, yield on the German 30 Year bond fell, attributing to supply shocks crude oil, but crude oil output does not appear in jeopardy, as the US proposed to release strategic storages, and Saudi supply would be back on level terms before the end of this month.

In the US, the Federal Reserve will decide its stance on the monetary policy in this month’s meeting. A further fall in yields is possible if the rates are lowered again at this meet. As a consequence, falling yields in the US treasury securities might suppress some demand for bonds leading to sell-off.

A broader picture in the yields across some developed economies suggests the availability of positively yielding safer assets. Across the positively yielding sovereign debt, the dominance of USD denominated debt would have the edge over the rest, due to relatively stronger exchange rate, and convertibility.

In addition, the private debt of corporates also witnessed sharp inflows to companies with superior credit quality. Recently, the media had reported widely on the increasing piles of negatively yielding debt, which stood at $17 trillion in August. As a matter of fact, the bondholders witnessed a substantial price increases, as the bond yields turned negative.

Use of monetary policy to control economic slowdown appear significant. However, the current need for prudent fiscal policy appears more desirable. We would need both fiscal & monetary policy prudence across the globe to come out of heightened uncertainty.