Lately, on 12 September 2019, European Central Bank had declared its mammoth asset purchase program, which would see the bank buying debt at a monthly pace of 20 billion euros per month starting on 1 November 2019. In addition, the deposit rate was cut by 10 basis points to a record low of -0.5%, and measures were introduced to curb losses of the banking companies in the eurozone due to prolonged negative interest rates.

Previously, the bank had conducted a similar program to tackle the sovereign debt crisis in Europe, which was triggered after Greece defaulted on its debt. European Central Bank intends to operate in this accommodative stance until the inflation outlook reaches close to 2% or below.

Policymakers in the US had expressed concerns over the exchange rate that witnessed a sharp appreciation of USD against EUR, following the stimulus program announced by the European Central Bank.

Nevertheless, the policymakers do not weigh in, when it comes to monetary policy administration in the country. The United States Federal Reserve (Fed) will be starting its two-day monetary policy review on 17 September 2019.

Let’s look at the possible factors weighing on the policy decision of the Fed:

The existing lower rates and the heightened uncertainty have accelerated the contraction between short term rates & long-term yields. A lower spread in the short term & long-term rates indicate less profitable business for the banks. It is believed that lower rates would encourage more spending, but that is just a demand-side rationale. 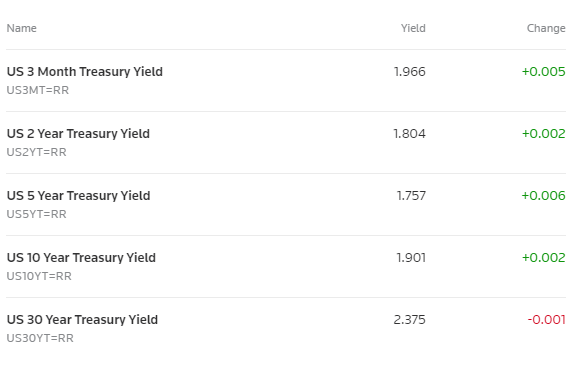 The supply side of the monetary policy has been comparatively stronger. The lower yields, and even negative yields have been prevailing in some of the developed countries, across the globe. As a matter of fact, lower rates are the primary reason driving the yields to comparatively lower or negative territory.

Status quo in the rates has witnessed some of the US banks laying off staffs, to cut on costs in order to maintain profitability. Lowering the rate again would lead towards further fall in yields, which is not favourable for the retirees.

Where does the GDP stand?

According to the Bureau of Economic Analysis (U.S.), the US economy grew by 2% in the June quarter at a seasonally adjusted annual rate. The figures were lower in the second estimate by BEA, which trimmed the GDP growth to 2% from 2.1% in the advance estimate.

During the first quarter period in 2019, the economy rose up 3.1%. The second quarter GDP has witnessed improvements in the personal consumption expenditure, which grew at a rate of 4.7%, and expenditure by federal and state government was better.

Debt has grown significantly; the below figure in the image form justifies that the numbers have increased from the previous peaks in nominal terms. This data is taken from Federal Reserve New York’s Quarterly Report on Household Debt & Credit. 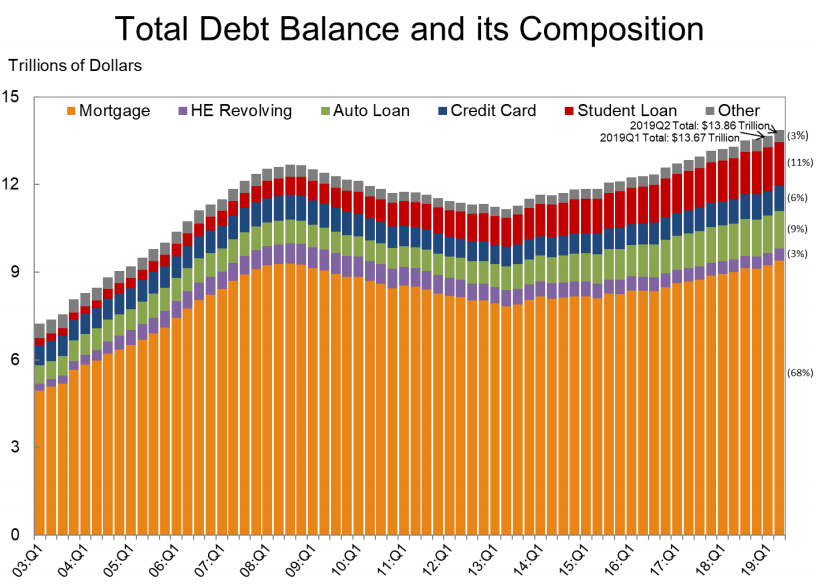 Interestingly, the mortgage delinquency has improved, 1% mortgage balance became 90 or more days delinquent in the second quarter compared to 1.1% in the first quarter. This equates another low in the history of data.

Food inflation for the month of August was unchanged, and the index for food at home has been on a declining trend for three months in a row now. Index for fresh fruits, the index for cereals and bakery products also declined.

Energy Inflation was down 4.4% over the past twelve months, and it decreased by 1.9% in August. All of the major components in index has declined with gasoline down 3.5% in August, the electricity index was down 0.3% after rising in July, and natural gas rose by 0.1% after falling in seven preceding months.

According to Bureau of Labor Statistics, the unemployment rate for the August 2019 period was unchanged at 3.7% or 6 million. The number of people with long term unemployment (jobless over 27 weeks) was little changed at 1.2 million in August.

In August 2019, the total nonfarm payroll employment increased by 130k, having averaged 158k per month so far this year, this was also below the monthly average gain of 223k in 2018. The federal government had hired 28k largely due to the upcoming census.

Employment in the mining activities declined by 6k in August. Retail trade jobs have been sluggish with 80k job loss over the year. While comparing the job growth against 2019, the rate has moderated in manufacturing, transportation, construction, leisure and hospitality.

Over the past twelve months, the average hourly earnings have seen a growth of 3.2%, and in August, it increased by 11 cents to $28.11. In addition, the data was revised for the June & July figures, which is now 20k less than (combined months) as previously reported.

It is likely that the US Federal Reserve would cut the federal funds rate in the upcoming meeting. Considering the major underlying factors, including GDP, inflation & unemployment. In the GDP, household consumption has risen firmly in the second quarter, and growth in fixed investments, exports were subdued.

Mortgage delinquency has been historically low at 1% of the mortgage balances. GDP growth engine is not firing at all cylinders, and positive contributions from gross private domestic investment and exports appear desirable.

Job gains have slowed comparatively on an average basis in some areas measured under Establishment Survey Data. Previous year’s average monthly gains have been lower than the current monthly gains. Whether the possible rate cut would underpin the recovery in fixed investment, and exports could be debated topic.

Uncertainties in the trading environment will again pose a substantial weight when the Fed decides on the upcoming monetary policy. Policymakers in the US have postponed the tariffs on $250 billion worth of the Chinese goods, until mid-October this year which was earlier planned to be levied by 1 October 2019.

CLICK HERE FOR YOUR FREE REPORT!
Tags:
Europe Lowers Rate & Stimulus Federal Reserve
All pictures are copyright to their respective owner(s).Kalkinemedia.com does not claim ownership of any of the pictures displayed on this website unless stated otherwise. Some of the images used on this website are taken from the web and are believed to be in public domain. We have used reasonable efforts to accredit the source (public domain/CC0 status) to where it was found and indicated it below the image.