Time is dynamic. Business is dynamic. Change might be the only constant factor but surprisingly for the Aussie share market, some events and statuses have remained intact over the past century. A 100 years is a really long period, and to have similarities and consistency in this elongated time frame is a noteworthy discussion.

Australia- The Land Down Under: 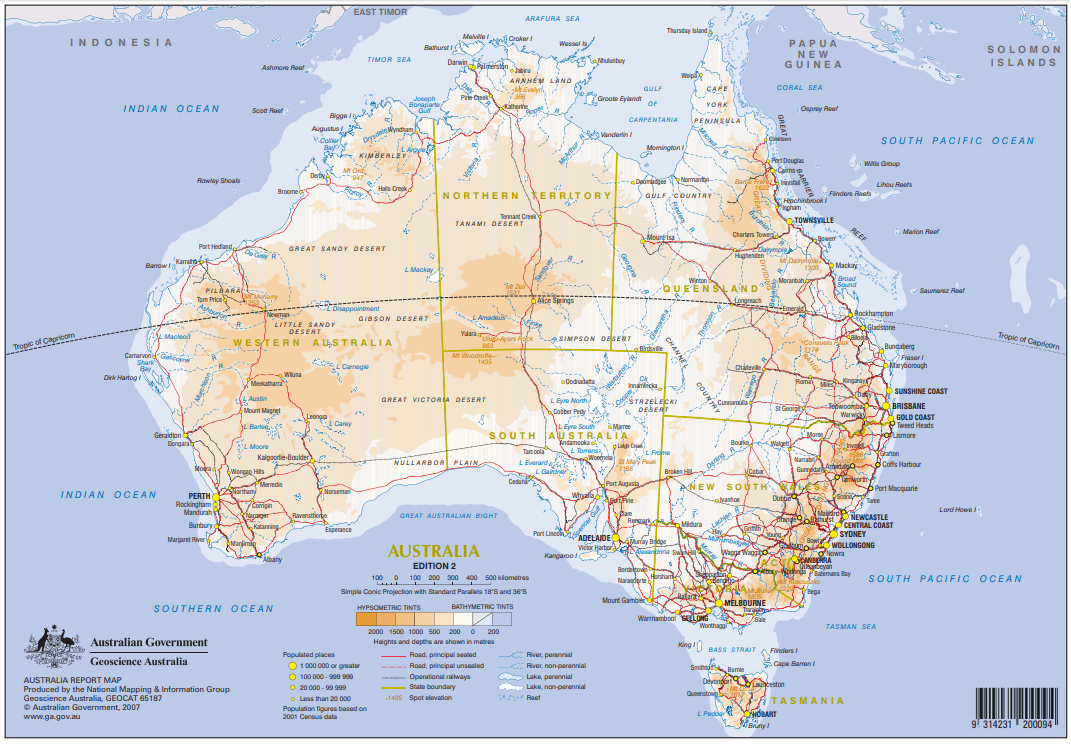 Even though it is the driest inhabited continent, the booming economy of the Australia is blessed by the expanse of metals and minerals that is embedded within the country, making some of the market experts referring to it as âThe Lucky Countryâ. There have been technological advancements and global trade expansion in the Aussie business over the years.

A notable event in the Australian economyâs discussion, often and rightly emphasised on is the fact the country was the only advanced economy that ceased to get adversely impacted by the Global Financial Downturn in 2008-2009 period.

On the ASX, there are numerous shares, warrants, exchange traded options, exchange traded funds, futures and likewise products that can be traded. Banking and financial space comprise of the biggest stocks that trade on the exchange, when considered through their market capitalisation. Also, the most prominent and renowned market index is the S&P/ASX 200, containing the topmost two hundred stocks listed on the ASX.

The trading on the Australian Exchanges was initially led by a call system for the bid to take place. The 1960s saw the transit to a post system, wherein bids and offers were written on blackboards to record transactions. The 80âs welcomed the introduction of the electronic system and by 90âs, trades took place via computers. The Aussie share market has history that dates back to these time frames, over the past 150 years.

As per the statistics from 30 November 2018, the Australian stock market was the 16th largest equity platform across the globe with a domestic equity market amounting to almost A$1.9 trillion. On this note, let us have a look at the significant events for the same: 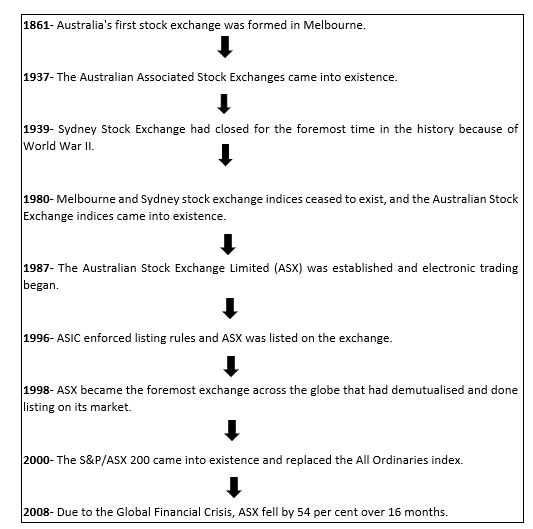 Over the past 100 years, the Australian equity market has increased in size relative to the economy, while its composition by industry has also undergone a substantial change. Being an important source of funding for the Australian companies, and a retirement saving warehouse, the Aussie share market is a significant and high profile financial markets. At the end of 2018, the total capitalisation of listed companies in Australia was almost $2 trillion, with $5 billion in shares being traded on a regular basis. The most notable listings include major banks and resources firms, which are prime contributors towards Australian output and employment. 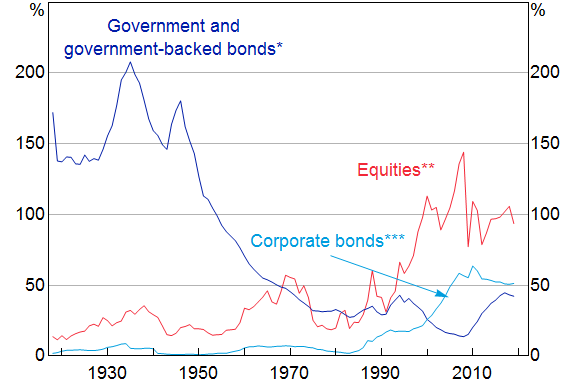 The main motive for investing for most investors is to gain good shareholders returns on their investments. The Aussie share prices have risen by an average of approximately 6 per cent each year, in the last 100 years. It is a strange yet notable finding that in this time frame, the different industrial sectors have generally performed quite similarly. The dividends on the stocks of Australia are comparatively more than other economies, because of tax treatment in Australian region.

The total nominal return on shares has been around 10 per cent per year over the century. Another strange yet notable finding in this time frame is that in the last 100 years, there have not been material differences in returns across sectors. 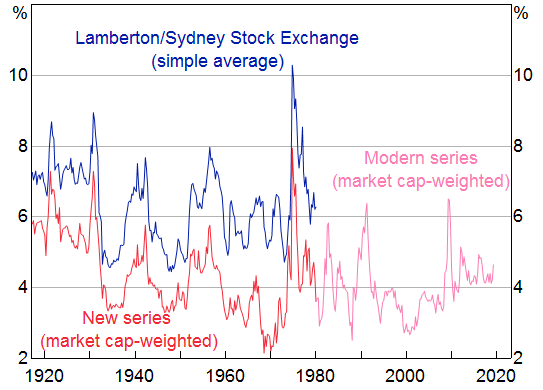 Adding on to the strange yet notable findings, the present day listed companies on the ASX, or the composition of the stock market is very similar to its composition that existed 100 years ago. The ASX has some of the oldest companies of the world on its listing. Finance and resource corporations have accounted for the majority of the listing volumes, followed by the mining companies. Precisely, it can be concluded that the Australian equity market has exhibited growth during the last 100 years to be a vital part of the countryâs financial arrangement. 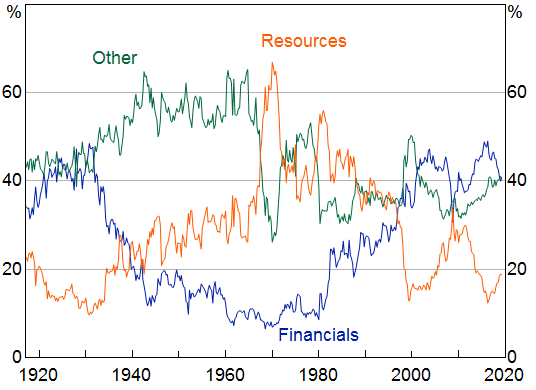 Concentrating on the current business environment, the globe is being taken by the storm with various occurrences on the global level. The world has come a long way and we are at present time, talking in terms of the technological advancements, trade wars, 5G boom, artificial intelligence, virtual reality, electric vehicles, cultured meat revolution and legalisation of cannabis. The rich Australian equity market is no-where behind in these discussions and is thriving hard to pace up with the global drifts in the business world.

Before this, it is important to note that presently, the Australian economy is at a unique point. After posting a historic 30-year long period of consecutive growth, the economy is showing signs of eventually slowing down. The main triggers, out of the many, are believed to be the interest cuts and impact of trade war amid China and US. However, being the powerhouse that it is, the top 100 companies of the Aussie equity market have been up by almost 9 per cent in the past year.

Getting back to the evolution, Dual listing has made a mark on the ASX. By 2000, the entire Aussie firms figure, who had dually listed their respective stock on the NZX as well stood around one hundred and twenty. To reap benefits of exposure, more investing opportunities and savour increased liquidity, companies have chosen to indulge in dual listing over time, in compliance to the set regulations.

On a rich global term and amongst the most recent events, the ASX witnessed the inclusion of Israeli companies, who have chosen to be listed on ASX to diversify their capital and take advantage of the liquidity offered by the exchange. The count of listed Israeli firms is around 15 as of 2019. Some of these are; Lithium-ion battery researcher UltraCharge Limited (ASX:UTR) stock which closed flat on 16 July 2019 at A$0.002, along with security tech company Dotz Nano Limited (ASX:DTZ) stock which last traded on 12 July 2019 at A$0.078 and HeraMED (ASX:HMD) stock which closed at A$0.195, up by 2.632 per cent with a market cap of ~17.51 million.

What are Stock Markets ?

Tags:
Auckland International Airport Limited (ASX: AIA) A2 Milk Company Limited (ASX: A2M) Reserve Bank of Australia Australian Securities and Investments Commission Australian Securities Exchange
All pictures are copyright to their respective owner(s).Kalkinemedia.com does not claim ownership of any of the pictures displayed on this website unless stated otherwise. Some of the images used on this website are taken from the web and are believed to be in public domain. We have used reasonable efforts to accredit the source (public domain/CC0 status) to where it was found and indicated it below the image.