The technologies powered by Artificial Intelligence are transforming the industrial landscape as AI has the potential to improve efficiency, accuracy and productivity across an organisation. Artificial intelligence emphasizes on the creation of intelligent machines that react and work like human beings. It is believed that under the influence of AI, many sectors including healthcare, financial and transportation would undergo an immense transformation. Artificial Intelligence would enable the provision of more cheap and productive services by these sectors.

The Australian government has recognized the importance of innovation in the technological space and has taken some significant moves in recent months. The government set up the Office of Future Transport Technologies in late 2018 to help prepare Australia for the upcoming arrival of automated vehicles and few other innovations in the transport sector. The federal government also allocated $29.9 million for enhancing the efforts of the country in artificial intelligence and machine learning over four years in the country’s 2018-19 budget.

Artificial Intelligence technology has been witnessed as an emerging asset by the business leaders and has already transformed the way of operation across different sectors. Let us have a look at some of these sectors below:

Retail Sector: AI technology is deployed in the retail sector as autonomous robots that scan shelf inventory and help store personnel with metrics, inventory data and shelf intelligence. The technology also assists in expert advice on purchases, customer service and operations related to multiple channels. The retail sector is expected to surpass the finance sector in deploying AI technology.

Education Sector: Artificial Intelligence is allowing the automation of administrative tasks in the education sector so that the institutions can reduce the time required to complete complex tasks and focus more on students. Besides this, the technology enables the provision of smart content to the students by digitizing textbooks and creating new learning interfaces.

Transportation Sector: It is another major sector where AI technology has progressed a lot. The self-driving cars, autonomous bus service, intelligent search for route optimization and free parking spaces, and radars to detect obstacles and pedestrians are all the advances made by AI technology in the transport sector.

Several information technology firms are transforming the way of living by providing AI technology services across the world. Let us have a look at three of such companies that are also listed on the Australian Stock Exchange:

Operational Performance: In June this year, the company announced the official launch of LiveSmiles, intelligent corporate wellness solution, in collaboration with Microsoft, the company’s global launch partner. The product was introduced with the help of Deloitte Australia at the head office of the company in Melbourne. The company informed that LiveSmiles would incorporate key features like AI-powered Bot Assistant, real-time recommendations to managers and data analytics and insights.

The company also launched its AI-driven, data-centric security solution across Microsoft’s collaboration channels in conjunction with its alliance partner Nucleus Cyber in June. 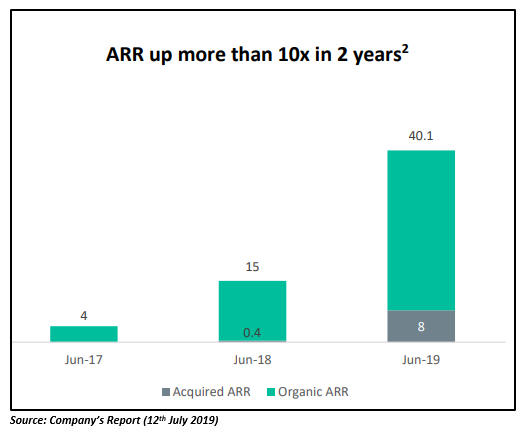 Stock Performance: The company’s stock is currently trading lower on ASX at AUD 0.480 (as at 3:47 PM AEST on 17th July 2019), down by 6.8 per cent relative to the last closed price. The stock’s market cap was recorded as AUD 353.08 million at the time of writing the report. LVT has delivered an enormous return of 58.82 per cent on a YTD basis and 22.73 per cent over the last one month.

The Australian-headquartered company, Gooroo Ventures Limited (ASX: GOO) supports organisations in making better decisions and value generation by providing a new meaning to the organisations’ data. The company applies its human thinking science and unique technology to empower every organisation to its true potential.

Operational Performance: In an announcement on ASX on 1st July 2019, the company informed that it has entered into a Master Licence Agreement with ManpowerGroup’s Australian operation to support major redeployment and reskilling initiatives. Under the agreement, ManpowerGroup would get the right to deploy the company’s technology across its client portfolio.

The company also entered into a commercial licence agreement with Biz Group, which is a UAE-based company providing professional services, teambuilding and learning solutions. Under the agreement, Biz Group would be able to use and distribute the company’s technology with its major customers.

Financial Performance: In February this year, the company released its interim financial report for the half-year period ending 31st December 2018. The company reported a rise of 331 per cent in its revenue from ordinary activities to $421,748 during the period. The loss of the company attributable to the owners of Gooroo Ventures Limited for the half-year was also 48 per cent down to $934,079. 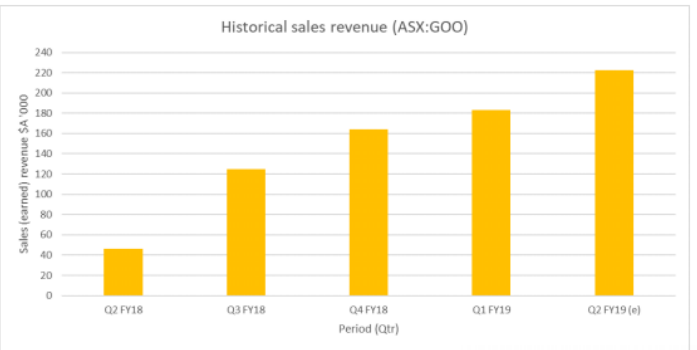 Operational Performance: The company reported in June 2019 that it has reached an agreement with Westpac Banking Corporation (ASX: WBC) for a $1m debt facility that would support the company in securing operating cash flow for fluctuations related to higher value orders and continuing pursuing its strategy.

Financial Performance: Recently, the company announced its quarterly results for the three months ending June 2019 (Q4 FY19). Spectur delivered the strongest quarterly revenue to date in Q4 FY19 of $1.45 million, which was 23 per cent higher than the revenue in Q3 FY19. The company also achieved the strongest sales results of $627,000 in June 2019. The cash balance at the bank as on 8th July 2019 was reported as $2.16 million.

The company also delivered strong financial results during the half-year ending 31st December 2018 with its revenue improving 94 per cent.