AI In The Retail Sector; Coles Group And Microsoft Strikes A Deal

Artificial intelligence is every business’ focus and charm in the present times. Interestingly, award winning physicist Stephen Hawking believes that AI is powerful enough to not only eliminate jobs, but also leave no space to create new ones. Social media giant, Facebook is apparently developing an artificial intelligence design which would understand emotions, identify objects in the posted pictures and even forecast the actions of the users. Machines and robots would substitute for human beings. Talking about replacements, Sony had created Aibo, the robotic dog that one could buy and play with, the ideal pet that was emotionally expressive and even recognised its owner. Apple’s Siri, Google’s Maps and Amazon’s Alexa can be deemed as real life and common examples of the AI discipline. With this revolution, a lot of such tech-savvy products, services and replacements took a toll over the global market.

What is this buzz about? What does artificial intelligence mean? Let us know about it in detail:

What is AI (Artificial Intelligence)?

AI or artificial intelligence can be best expressed as the simulation of human intelligence processes of learning, reasoning and self-correction, by machines. The term is often replaced by machine intelligence, as AI is associated to machines that impersonate cognitive functions which are linked with the human mind. In an era of AI, machines would overpower humans and would be increasingly capable of performing the simplest and the toughest tasks, in the personal and professional space.

The term Artificial Intelligence was coined by John McCarthy, an American scientist and one of the founders of the AI discipline, in the 1950s. Primarily, the artificial intelligence machines are custom made and inclusive of speech recognition, learning, planning and problem-solving processes.

What are the benefits and drawbacks of Artificial Intelligence?

Before understanding the pros and cons of AI, one should tag AI as the form of science which is a tech-savvy decision support system.

On the advantages front- the biggest benefit of AI is that it accomplishes the defined tasks with ease, as repetitive tasks can be automated into the AI system. AI machines work for an indefinite time period, and in an ideal scenario, are prone to making fewer or no errors. The areas where artificial intelligence can be utilised are almost in every realm of businesses and personal lives- right from mining, conveyance to medical fields and household activities. In situations where human safety is vulnerable, AI inflicted machines can perform the tasks.

Discussing the disadvantages of AI- the biggest and most impactful shortcoming of the technology would be the high costs associated with it; right from the creation to maintenance and repair. Come what may, a huge section of experts believe that humans cannot be replaced by machines, as inculcating natural emotions, creativity and moral values is a natural trait that humans are born with. AI machines do not have the scope to improve with the experience they gain, but humans can. Technological advancement has its good role to play, but the fact that it in-turn causes less employment opportunities cannot be ignored.

After consulting giants and tech-savvy firms, contemporary retail companies are gearing up to embrace the features and forwardness of the artificial intelligence technology. Target, Macy’s and ASOS are amongst a few players who have started to implement AI technology into their works, either via chat boxes, sort feedback designs and enhance their predictive analytics spheres. The transition from traditional retail to tech-friendly AI instigated retail is undergoing a seismic shift.

However, it should be noted there that not all retailers have yet adhered to the artificial intelligence technology, given the heavy costs and probable lack of accessibility of the technology to them. AI can help retailers in a number of ways, some of them are listed below:

Let us look at a few examples, wherein AI is already live in the retail sector-

As per a Government report, the country realises the importance of artificial intelligence technology and seeks to seize the significant economic and social opportunities that digital technologies bring. The revolution has begun with businesses adopting the AI technology and improving productivity, enhancing their overall operations.

An estimation suggests that digital enhancements to existing industries and rise of new ones could be valued at $315 billion for the economy of Australia across the upcoming ten years period. Yield technology in agriculture, quantum computing, Blockchain users and other digital technologies are already part of the game.

As an icing on the cake, the country bears potential to educate and have courses directed towards Artificial Intelligence.

Few Players of the AI Realm, listed on ASX:

A few companies, trading on the Australian Securities Exchange, adept to AI are as follows:

Coles and Microsoft team up to bring in business transformation:

Aussie retailer Coles Group Limited (ASX: COL) entered into a strategic partnership with tech giant Microsoft, to utilise Microsoft’s Azure cloud platform, instead of continuing with its old processes, across its stores and supply chain. The sensors are most likely to allow COL in store setups and smarter checkouts. It would aid the company for better forecast of demand and supply for different products and improved understanding of customer trends. 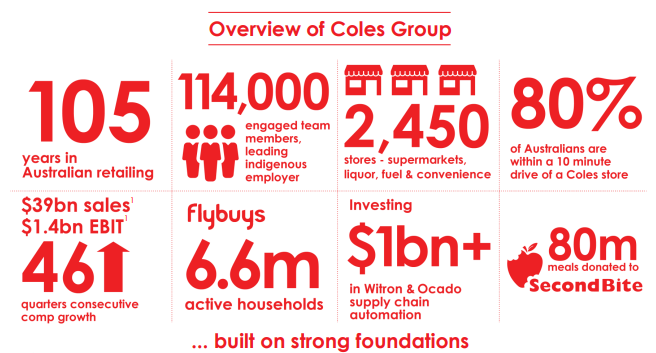 Concluding this read- is AI the hottest and most promising development in the technological landscape? It would be fascinating to watch it unfold in due course.

To read more about the Artificial intelligence stocks, click here.