The reports not only help the stakeholders, but it also helps the company’s management to understand its business operations for a particular period. They can identify the shortcomings for the period and thus work on them to get a better result in the next cycle. The reports also help to understand margins like operating margin and net profit margin. Operating margin information helps to know how the company has controlled its operating expenses, and the net profit margin helps to understand the amount of money left with the company after meeting all its expenses.

The reports also help the company to frame their outlook and guidance for the upcoming periods.

In this piece of the article, we would be covering two such companies which have performed well during the period; however, post the reports their stock price has been under pressure on ASX. Below is the overview of the announcement made by the company.

About the company: Nearmap Ltd (ASX: NEA) is a company from the industrial sector which supports the government as well as businesses to have a deeper understanding of the premium geospatial content as a service.

In North America, the ACV portfolio as at 30 June 2019 increased by 76% to $22.7 mn. The North America ACV in the present scenario consists of 36% of the Group Portfolio. The strong sales team contribution ratio is anticipated to be more than 100%, which includes the opening of the second NA sales office in New York along with headcount growth in the second half.

In Australia and New Zealand, the company witnessed a 19% growth in the ACV portfolio to $57.9 mn as at 30 June 2019, improving its market leadership position. From these regions as well, the company expects its sales contribution ratio to be more than 100%.

The cash balance of the group at the end of FY2019 on 30 June 2019 was $7.9 mn. The company used $9 mn of the capital raised to accelerate its growth initiatives, which included:

About the company: LiveTiles Limited (ASX: LVT) is a company from the IT sector and is engaged in the development as well as the sale of business software in Australia and worldwide.

The fourth quarter of FY2019 was a record quarter for the company. It made an organic ARR growth of $5.6 mn, which is 65% above the previous corresponding period. The company has reported a 167% ARR growth in the last 12 months and up to 10 times as compared to 2 years ago. Further, during the reporting period, the company had acquired businesses. These businesses have performed well with strong cross-selling and bundling potential in FY2020 and beyond. The repeat revenue from Hyperfish is up by 425% post its purchase.

Apart from the significant customer wins during the period, the company also launched an AI-enabled intelligent search platform with Search365, its strategic partner. It also entered into a partnership with Microsoft on the global launch of “home sites”, and pharma company Novartis, which is now LVT’s new Wizdom customer. The company also launched LiveSmiles, which is the intelligent corporate wellness product of the company.

Outlook: The company reported that it would continue its investment in its products, partners as well as sales and marketing channels, which in turn would help the LVT in delivering strong customer and revenue growth in FY2020. By 30 June 2021, the key objective of the company would remain to grow ARR not less than $100 mn organically. 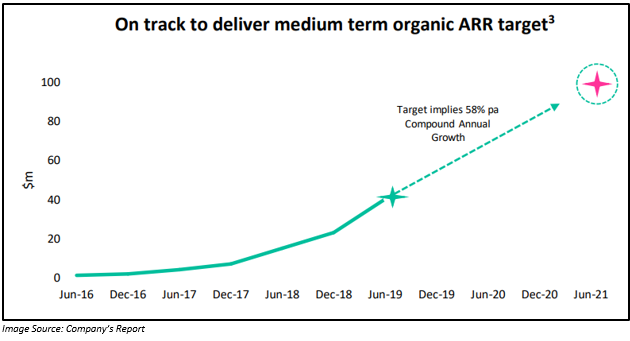