What is Quantum Computing?

The classical computers that we use in the present times use a bit to process information. Bit uses either 1 or 0 to decode a piece of information. However, in quantum computing, the computer uses quantum bits or qubits to process data. It uses the unique ability of subatomic particles which enable them to exist in more than one state. Quantum and classical both try to solve problems, but the approach followed by each is different.

ALSO READ: Defining Quantum Computing - What you need to know? 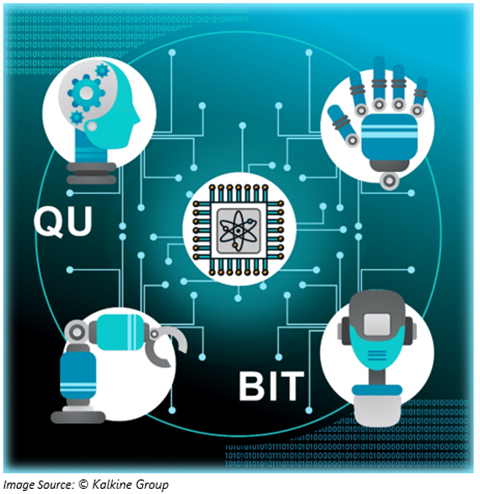 Quantum Computing can be explained via two vital quantum physics features, ‘Superposition’ and ‘Entanglement’, that form the basis of supercomputers. These two features enable these supercomputers to operate at an exponentially higher speed as compared to conventional computers with less energy consumption.

Superposition refers to the counterintuitive ability of quantum objects, like an electron that can exist in multiple states at the same time.

Entanglement refers to the phenomenon quantum entities are created or manipulated in a way that none of them can be described without referencing others.

Why is Quantum Computing becoming so important? Why do we need it?

In 2017 IP Expo, Professor Brian Cox said that quantum computers have a huge capacity to find answers related to life, the universe, and encryption. He stated that quantum computing could be considered as a massive stack of possibilities and sets of data.

Shor’s algorithm is a well-known algorithm for factoring prime numbers on a classical (non-quantum) computer that needs an amount of time that is basically exponential with the size of N. Here N is any number, let say 25. If we enter N=25, then the quantum computer returns the factors of 25.

To develop a broader view of quantum computers, one must understand that quantum computing delivers incredible speedups for specific problems. On that front, the researchers are working understand the type of problem suitable for quantum speed-ups and accordingly develop the algorithms to resolve them.

In simple terms, quantum computing is believed to solve problems related to optimisation, which plays a crucial role in every field from defence to financial trading.

What are the different types of Quantum Computing?

There are three types of quantum computing (as depicted in the image below). 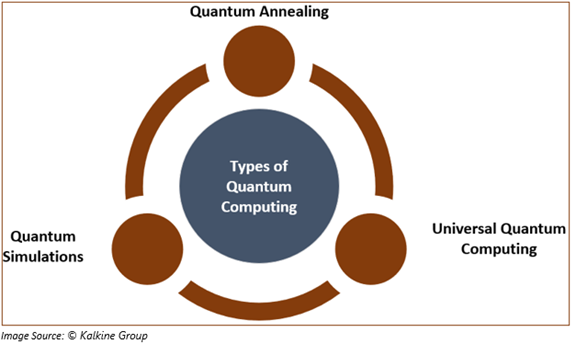 Quantum Annealing is used for solving optimisation problems. On this front, as highlighted above, researchers are looking for possible best possible configuration.

An example of this is the quantum experiment which was conducted by Volkswagen in association with Google and D-Wave Systems, which aimed to reduce heavy travel in the city Beijing.

The experiment was a success as it was able to reduce the traffic by selecting an ideal path for each vehicle.

While classical computers can take many years to compute the optimisation solution, quantum computing can make this happen within a few hours or even less.

Quantum Simulations cater to specific problems in quantum physics and are beyond the capacity of classical computing.

An area where this type of quantum computing is more suitable includes modelling the effect of a chemical stimulation on massive subatomic particles. It is capable of simulating protein folding. Misfold protein can result in diseases such as Alzheimer’s and Parkinson’s.

In this area, quantum computing can help in computing the massive protein folding sequence to prepare an effective medication. In the upcoming period, there are possibilities that we see that quantum simulations would be used for rapid drug designer testing.

Universal Quantum Computing is most challenging to build; however, these computers are highly powerful and are most generally applicable. These computers would make use of 100,000 qubits. In present times, we can access not more than 128 qubits.

The idea behind developing the universal quantum computing is to direct the machine at any complex computation and get a quick solution. This includes solving the other two quantum computing types discussed above and even beyond that.

In the long run, experts believe that universal quantum computers could be beneficial in the fields of Artificial Intelligence.

INTERESTING READ: Top Technology Predictions for the Current Year & Beyond

Top 5G stocks to explore as US rolls out the service

A future insight into global healthcare

Norton crypto mining services: All you need to know

Walmart is ready to penetrate the Metaverse world

Tech stocks in 2022: Will they create wealth for investors?