What is merger & acquisition (M&A)?

Merger and acquisition (M&A) is a business process in which two firms merge or buy one other to form a bigger enterprise.

Mergers happen when two firms join hands. Such partnerships are most common amongst firms of similar size that recognise the benefits that the other may offer in terms of profitability, capabilities, and efficiencies. Merger terms and conditions are frequently amicable and mutually agreed upon, and the two firms grow to be equal partners in the new endeavour.

Acquisitions happen when one firm decides to acquire another firm and integrate it into its operations. Unlike mergers, acquisitions could be amicable or hostile, depending on whether the purchased firm feels that it is better positioned as an operating unit of a larger initiative.

However, while the results of the two approaches are identical, the relationship between the two firms will alter depending on whether a merger or acquisition has taken place. In another sense, the difference is how the target corporations’ employees, shareholders, and board of directors are notified about the deal.

Both the terms acquisitions and mergers are frequently used interchangeably and necessitate the consolidation of two distinct firms, both public and private.

Moreover, M&A is performed to boost the value of the business by expanding into a market segment, extending geographically or gaining market share. The investment banking business makes a fortune from mergers and acquisitions, but not all work out.

What is a merger & acquisition (M&A)? Why do companies do M&A?

What is the structure of merging two companies?

Mergers could be structured in various ways, depending on the connection between the two organisations engaged in the transaction:

This kind of deal is typically conducted for diversification purposes between enterprises in different industrial sectors.

In business, a horizontal merger occurs when two firms in similar industries but are not direct rivals unite. 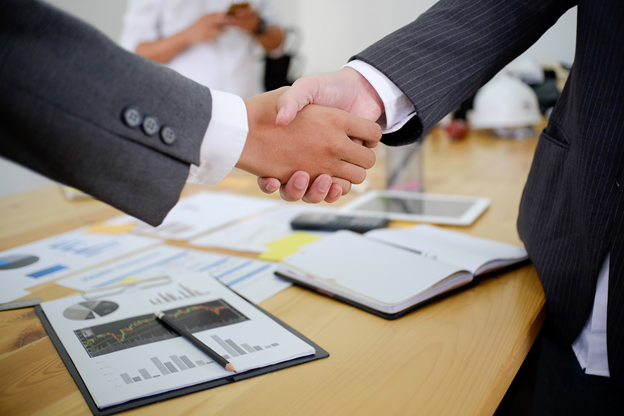 Along the supply chain, a vertical merger occurs between a corporation and its consumer or supplier. The corporation intends to consolidate its market position by going up or down its supply chain.

This type of Congeneric merger arises when two firms serve the same customer base in various ways, for example, a cable operator and a television manufacturer.

When two organisations sell the same items in multiple markets, they can merge to broaden their market reach.

When two businesses sell separate but similar items on the same market, they can explore a product extension to boost their reach.

What are the intentions behind mergers and acquisitions transactions?

Compared to expanding organically, inorganic growth through mergers and acquisitions is generally a speedier option for a corporation to obtain more significant earnings. A business could profit from acquiring or merging with a corporation with the latest resources rather than taking on the risk of establishing the same.

The most common reason for mergers and acquisitions is to develop synergy, making the merged entity more valuable than the two firms independently. Synergies can emerge because of lower costs or more significant margins.

Businesses in cyclical sectors recognise the significance of diversifying their cash flow to reduce significant losses during the recession in their sector. Obtaining a target in a non-cyclical sector enables the firm to diversify its portfolio and mitigate market risk.

In a horizontal merger, the new organisation will gain a more significant market share and buy the power to influence costs. Vertical mergers also strengthen market power because the firm will have better control over its supply chain, avoiding external supply disruptions.

When one firm recognises significant taxable revenue while the other incurs tax loss carryforwards, this is referred to be a tax benefit. This is because purchasing a firm with tax losses allows the purchaser to use the losses to decrease their tax liability. Mergers, on the other hand, are rarely done only to evade taxes. 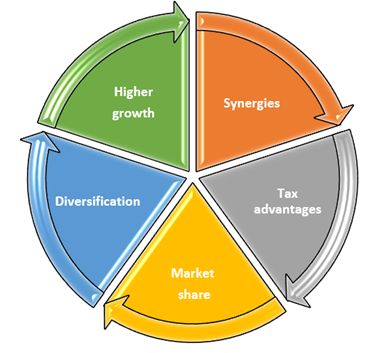 What advantages do mergers and acquisitions offer?

What are the drawbacks of mergers and acquisitions?