What is a government shutdown?

A government shutdown arises when the U.S. Congress fails to approve or settle disputes over the federal budget for the following fiscal year. It happens when non-essential U.S. government offices could no longer stay open owing to a lack of funds, services are not delivered, and government workers' wages are not paid.

Several federally run operations will be suspended during a government shutdown. A few organisations might remain open as long as they have cash reserves, but they would have to stop their operations when running out of money.

Suppose the mechanism mentioned above fails to meet the deadline during the budget process. In that case, the president and Congress might enact a continuing funding resolution that maintains the appropriations at the present level. If all these processes are not finished on schedule, a shutdown may ensue, indicating a complete breakdown in the budgetary process.

If a government shutdown happens, the U.S. federal government must limit agency services and activities, as well as suspend non-essential operations, including furloughing non-essential personnel.

Furthermore, a few agencies must continue to operate; if these services were to be halted, the public's safety, life, or health would be jeopardised. Personnel involved in essential operations may not be paid during this challenging period unless a special funding bill is passed.

Crucial federal agencies and services are unaffected by a government shutdown

The following is a list of key federal agencies and services that would continue to operate during a government shutdown. 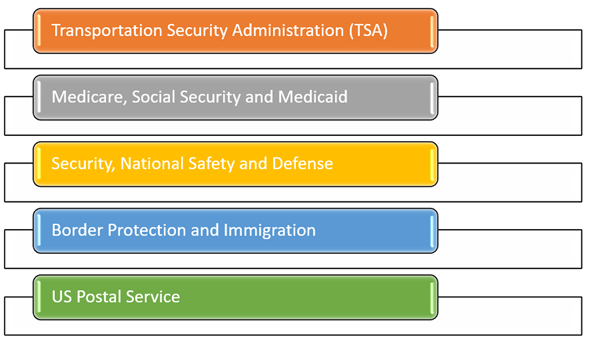 The following is a list of non-essential federal agencies and services severely harmed by a government shutdown and would be forced to shut down completely in an emergency. 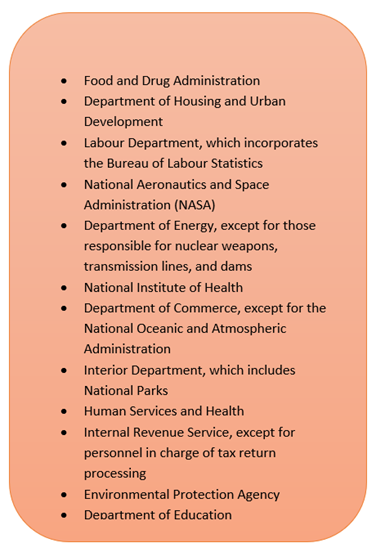 However, payments from government sources to civilians for veterans' benefits or unemployment insurance would not be interrupted throughout a government shutdown. The payment would be continued because these initiatives are funded by special allocated budgets from advanced Congressional appropriations. Furloughed federal workers could also submit a request for temporary unemployment benefits, but the procedure might take longer.

What are the repercussions of the government shutdown?

The repercussions of the government shutdown are widespread and can have a significant impact on residents' lives. For example, several federal processing activities could be severely hampered during the shutdown, and non-essential agencies that are unable to self-fund could be obliged to furlough or offer unpaid leave to their workers.

Furthermore, new loans for education, businesses, and houses might take longer or be extremely difficult to process during this challenging time. Unemployment benefits and new applications for social security benefits will be processed at a slower pace until the time situation improves. The military will not be exempt from the effects of the government shutdown. Death benefits would not be granted to surviving family members of service members who died in the line of duty.

On the other hand, food safety may be compromised, and children may become ill as a result. In addition, the government shutdown might lead the U.S. Department of Agriculture to postpone or stop inspecting food items and prevent the Consumer Product Safety Commission (CPSC) from banning dangerous goods. 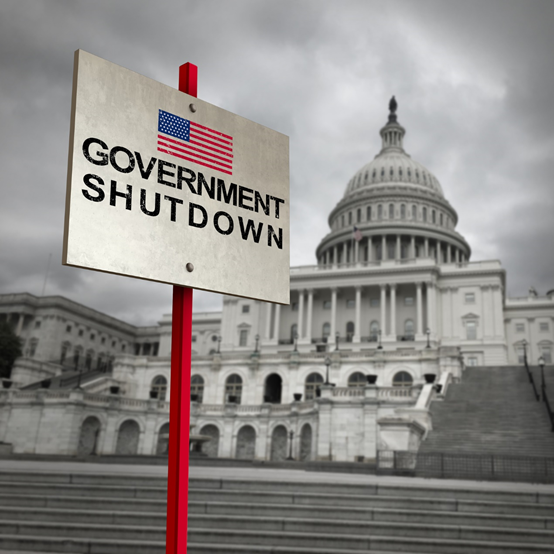 What are real-world examples of a government shutdown?

The latest and most prolonged government shutdown in American history occurred in 2018. As a result, Congress and President Donald Trump could not reach consent on funding for the fiscal year 2019. Consequently, nearly 800,000 government workers were affected by the shutdown.

Around 850,000 workers, or 40% of the federal civilian workforce, were furloughed during the 2013 government shutdown. It had a significant economic impact, with GDP dropping by 0.3% due to lower government spending. Republicans utilised the government shutdown to delay the implementation of Obamacare. According to the Obama administration, the shutdown slowed economic growth by 0.2% to 0.6%.

As per the Office of Management and Budget, both shutdowns cost US$1.4 billion, and it hugely damaged the economy.

What is Propy crypto & why is PRO token soaring?