Furlough refers to a temporary leave of employees under special circumstances. Companies might feel compelled to put their employees on a furlough when they suspect a downfall in the economy. Being put on a furlough means that the employees are still employed; however, they have been put on a leave of absence.

Furlough is a cost cutting technique followed by companies during tough economic conditions. It is also used by companies when they plan on reorganising the workforce. They are also commonly seen in military when soldiers are to be posted on duty. However, furloughs and layoffs do not mean the same thing as furloughs are not necessarily cutting off workforce.

Why do companies need furloughs?

Furloughs are adopted by companies when they are short of cash to pay to their employees. Furloughs can also be implemented when an organisation does not have enough work to utilise the workforce completely.

It is an alternative to firing employees and can help on cost cutting without the need for a future rehiring process.

How is a furlough implemented?

Employees can be put off work completely or they can be given a less packed schedule for the week and given a furlough on the days they do not come to work.

Reducing the work schedule is a good option when there are not enough work assignments, and the company is going through a restructuring.

How is furlough different from layoffs and reduction in force?

Furloughs allow employees to anticipate a rehiring in the future, unlike layoffs. Layoffs occur when firms are sure that they would not be able to hire the workers again. Most laid off workers are entitled to unemployment benefits.

Thus, furlough, layoffs and reduction in force are all different from each other. 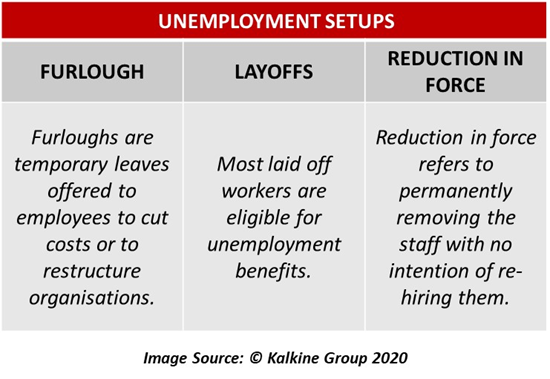 How is furlough different between exempt and non-exempt employees?

How long can furloughs last?

Furloughs can be implemented over a long period or a short period. Some furloughs can come in the form of mandatory unpaid leaves. This means that workers can be charged for leaves which were otherwise paid leaves for them.

Companies may also opt for furloughs when they anticipate a long period of shutdown.

What are some examples of furlough schemes?

Furlough schemes were implemented in the UK as a part of remedial measure under the Coronavirus Job Retention Scheme. Under this scheme, employees are offered furlough wages with the government paying 80% of those wages. The employer covers only the pension and national insurance contributions.

Full-time and part-time employees can both be furloughed. Apart from furlough, firms have also been offered other fiscal benefits by the UK government to tackle the aftereffects of the pandemic.

What to expect from stock market this year?

Travel restrictions: Which Airline stocks may get impacted most?

Sunak’s £1bn support package: Which sectors were left in the cold?

Which Sectors Will Benefit If UK Brings Back Furlough Scheme?

Why Christmas won’t be the same this year?

Business sentiment improves: Will it reflect on the stock market?