A Black Swan Event refers to an extremely rare event that could not have been predicted even with the help of sophisticated modelling techniques. A typical characteristic of such an event is that it leaves behind a severe impact on the economy, social conditions and overall well being of a nation. This impact may be positive or negative depending on the situation of the bearer, although mostly observed to have been negative. For example, COVID-19 has been a great disaster for Airline companies, at the same time big boon for online video conferencing companies such as Zoom.

What was the reason behind this terminology?

The term was coined due to the rare occurrence of the black swan bird. The phrase was developed at a time when black swans were thought to have been non-existent. However over time, the meaning has been modified to represent a bird that is rarely found.

The definition of this phrase has been adapted to better fit in the modern world. It was adopted into the field of finance by Nassim Nicholas Taleb. 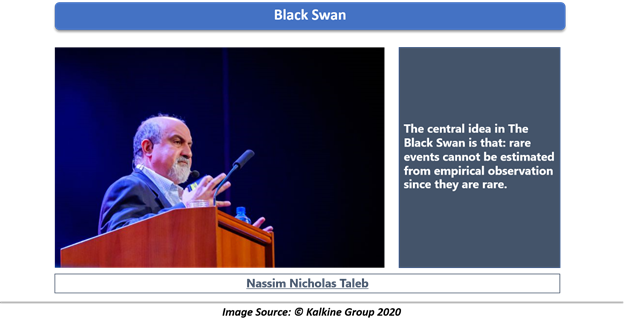 Taleb wrote a book about the Black Swan Theory in 2007 by the same name. However, this was first brought to light in his book “Fooled by Randomness” which was published in the year 2001.

In his 2007 book, Taleb’s idea of a black swan event digressed into non-financial domains. All scientific discoveries, historical events and artistic accomplishments have been termed as black swan events in his book.

What makes a black swan event different from any other disastrous event?

Nassim Nicholas Taleb describes a black swan event that fulfils all three of the following:

Black swan events usually are hard to predict and their frequency is erratic and quite low.  This is what sets them apart from any other high impact event.

Another characteristic that sets them apart is how people usually try to find a rationale behind the event after it is over. It is common for people to try and explain how the event occurred and establish a sense of predictability around it. This happens because humans are hardwired to find logic even in the middle of a pandemonium. It is human tendency to join the dots and read between the lines to develop even the tiniest bit of coherence possible.

However, even the presence of historical logs of black swan events does not permit us to prevent them in the future. No model that has been fed with historical data on black swan events can predict when next such event will occur. This is what makes these events unique.

What are some examples of such an event?

It is another example of how misinformation or partial information can lead to miscalculation and hence, bad decisions. This took place at the dawn of the 21st century, in 2000, a time when the market was enthralled by the possible onset of a technological revolution.

How did the dot-com bubble come into place?

With little or no knowledge about the incoming technological boom, speculators and investors put their money in certain bad investments. Many people expected technology based investments to be profitable in the long run. As people overestimated the financial boom accruing to technological advancements, their investments fell in the wrong place.

How is it a black swan event?

As is the rule, it fits the criteria of Taleb. However, even if people are weary of such a crash in future, that does not eradicate the future possibility of such an event. Case in point is the 2008 financial crisis as mentioned below. This again proves the point that an event of such nature cannot be avoided even with pre-existing information about a similar event.

Arguably one of the most noticeable Black Swan Events has to be the 2008 global financial crisis. The housing market crash led to banks suffering huge losses and it saw prominent financial institutions filing for bankruptcy.

What was the 2008 financial market crisis?

It started with the housing market crashing due to financial instruments being backed by subprime loans which were, simply, bad assets. These were packaged into bonds and given high level creditworthiness.

How does it fit into the definition of a black swan event?

This event is one of the prime examples of a black swan event. Upon closer inspection, it can be seen that this crisis checks all the three criteria given by Taleb. The event came unannounced, left behind a global impact and to this day people seek a reasonable explanation for the same. Financial institutions like Lehman Brothers, Fannie Mae and Freddie Mac shut down due the crisis.

Brexit was on the radar for quite some time; however, when it happened its economic implications were not quite known. Speculators estimated that it would take the UK two to three years to fully recover.

What happened after Brexit?

Global markets were impacted negatively. Pound and Euro both fell sharply and gold markets also took a hit. All of Europe experienced these effects and took time to recover long after the decision was announced.

How is it a black swan event?

Even though the Brexit decision had been on the table for long, its actualisation came as a surprise to many. Hence in a sense it was unexpected, it left a considerable damage to global markets and people still speculate whether the decision was good or not. Thus it fits the criteria quite well.

There are many such examples that fit the criteria specified by Taleb. All of these events are interspersed over large periods of time; however they have started occurring more frequently in the recent past.

Is Corona virus an example of such an event?

On the surface, the covid-19 pandemic and the economic crisis attached to it seems to fit Taleb’s definition. It came at a time it was least expected, it has crippled economies worldwide and people have tried to reason its outbreak. However, many statistical modelling techniques allow predicting a health crisis based on previous data. It is mathematically feasible to estimate the outbreak of health related hazards.

Through sophisticated techniques, it is possible to predict the probability of a pandemic outbreak, natural disaster or any such calamity. Thus, Corona virus does not strictly fit into Taleb’s definition and is not a very good example of the same. The maestro himself has rejected the idea of COVID-19 being a black swan event.

Good read on Taleb’s other powerful ideas: Developing Antifragility was Essential Pre Covid-19; Now It Is A Must- Taleb Your Go to Guru

ASX fintech shares worth your attention this month

What to do when debt feels unmanageable?

Why is Ravencoin surging today?

Why is Ravencoin surging today?

Is Gibraltar ready to become the first crypto hub worldwide?