Coronavirus: The Grey Or Black Swan?

There is a growing debate among the market experts for calling coronavirus a Black swan event vs a Grey Swan event.

The black swan is a term used to describe unknown unknowns or an unpredictable event that no one could have imagined. The term illustrates that nothing in the past could have forecasted the likelihood of this health and financial crisis.

The question now arises if the pandemic is rightly called a black swan event?

Some economists are stressing the actual term for the event as “grey rhino” that is described as a highly probable and obvious but still a neglected event.

Bill Gates had already predicted a pandemic in his TED talk in 2015, asserting that if anything can kill more than 10 million people in the next few decades, it is a highly contagious virus than a war.

Coronavirus since first reported in Wuhan district of China has shaken the world economy in and out. It has already infected close to 2 million people, killing 126.6K people to date by spreading in 210 countries.

The US alone has reported a death toll of 26,047 becoming the worst affected country in the world.

On 10 April, the death toll crossed the 1,00,000 mark worldwide with global cases crossing 1.6 million. The virus recorded over 2000 deaths alone in the US in a single day as the pandemic made its path affecting not just New York but also the subsiding areas connected by trains, subways and buses. New York City has been hardest hit which alone had 1,60,000 confirmed cases with over 7800 deaths till date.

WHO declared lifting a premature lockdown could result in a deadly resurgence of the disease as global deaths surpassed 1 lakh mark.

Australia On The Edge

IMF has hinted towards world’s worst meltdown since Global Depression of 1930s, with Australia contracting 6.7% this year.

However, some analysts are optimistic on the probable signs of flattening of the nation’s infections curve. Australia is now showing signs of the coronavirus nearing towards being stable. So far, the country has reported ~6400 cases with 61 deaths. 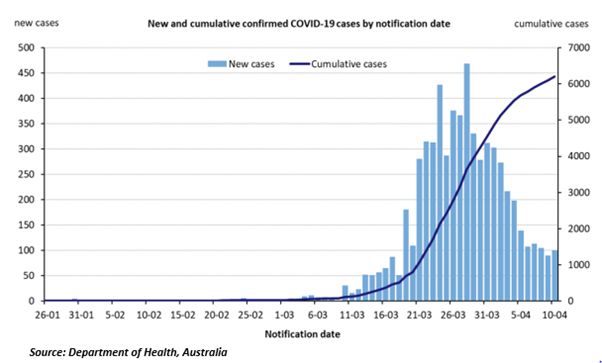 The daily increase rate in Australia has been moderating in recent days compared to sharp spikes of about 30% in rates two weeks earlier, as evident in the graph.

The Health Minister of Australia, Greg Hunt, stated a week ago that the early signs of flattening the curve are evident; however, they are not sustained yet.

Chief Medical Officer, Pauly Kelly stated that Australia could be on the cusp of reducing the number of infections to the point that the virus dies out. The medical officer concludes that Australia’s rate of transmission has decreased to 1or 2 people for every infected person.

However, he cautioned on following social distancing measures, failing which can speed up the virus spread.

China Worried On The Resurgence Of The Virus

On 31 December, China informed WHO formally about the coronavirus outbreak. The country that gave birth to COVID-19 has faced more than 82,000 cases and ~3,342 deaths due to the virus.

China had to enforce lockdown within the next three weeks in all the affected provinces and districts. By late February, when the virus outbreak had developed an epidemic scale, the country had started containing the virus. The residents of China were finally lifted from months of lockdowns as the country recovered gradually from the virus spread.

However, China still remains worried and cautious on importing no new cases from abroad to prevent a resurgence of the outbreak. The country is still taking strict containment measures in many places, including capital Beijing.

While China’s lockdowns and travel bans have played a key role in reducing the number of infections to quite low levels but without any vaccine or herd immunity, the virus is expected to resurge.

There can be a revival of the virus as business, schools and factories reopen gradually and increase social gatherings, especially given the risk of imported cases from abroad.

Sectors Affected By The Virus

The global equity market has witnessed massive selloffs by the virus outbreak disrupting several industries. As countries enter massive lockdowns due to the rising number of cases, the economy has come to a halt worldwide affecting households and businesses.

Sector that could benefit from the pandemic include online education platforms that have seen a surge in the number of subscribers with people now spending this period to upskill themselves. Apart from the education sector, e-commerce, technology players and healthcare space have been tapping the burgeoning opportunities.

ALSO READ: A Glance at Stocks immune to COVID-19

Videoconferencing and software solutions that facilitate remote working are also sought after as people work from home. Similarly, social distancing and work from home are likely to boost data usage benefitting the telecom sector.

However, with travel bans, restriction on public places and events, global travel and tourism are at high risk putting up to 50 million jobs in jeopardy as per the WEF report.

Subsequently, numerous airlines have suspended their operations due to record low demand.

Social distancing is widely being considered as a measure to flatten the curve and to slow down the spread of the virus. Public gatherings are being banned, and people are being forced to stay home amidst the rising number of cases.

While governments are passing stimulus packages, central banks are reducing interest rates globally into their economies that are ravaged by the coronavirus pandemic. While the US has passed US$2.2 trillion CARES Act to help lift up the economy, the EU has approved about 500 billion euros in stimulus measures.

While the US is on the peak of death rate, the EU has already started looking at a post-lockdown phase as virus cases slowed in the region.

The Australian government has passed $320 billion in fiscal support as coronavirus pushes people out of jobs and shuts businesses. Australia is also eyeing “flattening the curve” phase as the virus rate reduced in the country.

To combat the virus early and reduce the lockdown period, Australia must increase testing of not only people with symptoms but high-risk asymptomatic people also, says Professor Raina from Kirby Institute. She also added that doctors must be given independence in deciding if tests are needed and work as per their judgement.

We need to focus and spend more time to explore and face uncertainties even if we cannot predict them to better prepare ourselves to find out Black swan events or the grey events like coronavirus.