What is the meaning of black money?

The illegal activity used to raise cash and legitimate income that is not registered for tax purposes make up black money.

The proceeds of black money are usually paid in cash from illegal economic activity and are thus not charged. Black money recipients only invest in the underground economy, hide it, or use money laundering to give it the appearance of legitimacy.

What is the nature of black money?

Illegal activity is used to earn black money by collecting funds and taxes that are not paid to the government. However, the word 'black money is inherently complicated. Money earned by legal means is often referred to as "black money."

For example, suppose a grocery store accepts cash after a transaction but does not include receipts to its customers. This indicates that the store is dealing with black money because it will not pay tax on unrecorded transactions. Consider the case of a property buyer who pays $500,000 for a piece of land. If the buyer declares $100,000 to the government and pays $400,000 under the table, the deal is worth $400,000 in black money. In both cases, the sellers made money from legitimate sources but avoided paying taxes.

Where does black money come from?

The black-market economy, also known as the shadow economy, is a form of business that operates outside of government controls, rules, and taxes. 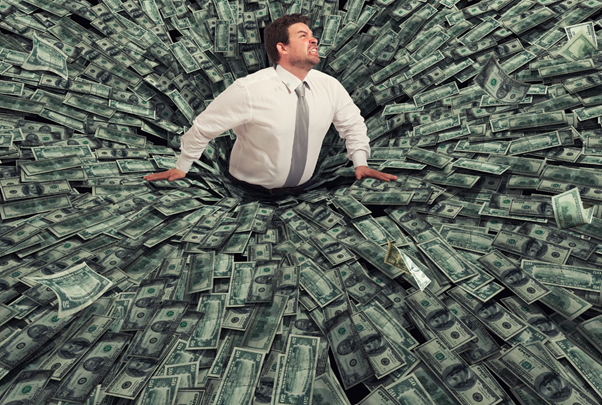 Illegal activity such as the theft of financial and personal information often generates black money, and cybercriminals are highly skilled at carrying it out. They obtain credit cards and bank accounts to open new lines of credit.

It isn't the end of black money generation. Furthermore, it raises revenue from tax-exempt legal products and services. It covers any jobs done "under the table," as well as income that is not reported to the tax authorities. A construction worker, for example, enters the black market system if he accepts a cash bribe and fails to declare it on his taxes, even though the job is legal, but his tax evasion is not. 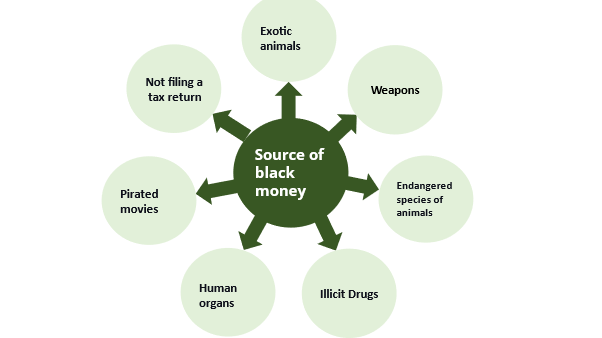 What effect does black money have on the country's economic growth?

The country's black money has a significant impact on its economic development. Unreported income that is not taxed allows the government to lose revenue, resulting in financial leakage.

Furthermore, these funds rarely make it into the financial system. As a result, entrepreneurs and small legal businesses could find it more difficult to obtain loans.

The nation's financial wellbeing is undervalued as a result of black money. Since participants in the black market have strong incentives to mask their activities, estimating the proportion of black money in any market is difficult.

The gross domestic product (GDP) or gross national product (GNP) of a country cannot contain these unreported earnings. As a result, a country's consumption, investments, and other macroeconomic variables forecasts will be deceptive. These inaccuracies harm the country's planning and policymaking. 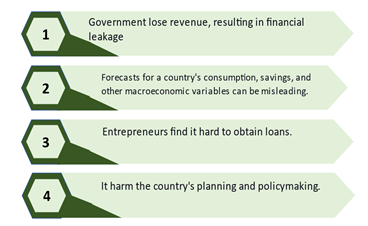 What is the link between money laundering and black money?

Money laundering is a practice by which criminals conceal their accumulated wealth by converting black money into white money.

People who have black money are unable to invest it publicly. They should either keep it hidden or spend it on the black market. They turn it to white money by money laundering.

It is the process of separating illegally made money from its source, mixing it with white money, and then returning it to the source.

What is Black Money?

What are the benefits of using black money?

To relieve shortages and procure forbidden goods, people turned to the underground economy. In some instances, governments introduced price controls or sales taxes that rendered products unavailable or unaffordable. There was a way to mitigate the harm by using black money.

Black money can also help to mitigate the effects of institutionalised racism. Governments have historically prohibited certain races from exchanging shares, owning property, or engaging in other forms of commerce. Some discrimination victims were forced into less controlled areas where they could earn black money as a result of these bans.

What are the drawbacks of using black money?

Criminal activities, such as corruption, are the product of ill-gotten money in the market, promoting its illicit use, especially during elections. Also, murders are carried out for political vengeance, with black money changing hands between the killers and those who hire them to carry out the crime.

Terrorist acts are a result of black money, which puts the country's stability at risk. Unsocial elements can quickly obtain illicit firearms.

The illicit funds are used for various illegal activities, including drug trafficking, in hotels and nightclubs on a wide scale.

Tech stocks to check out in September: Kalkine Media explores

How To Make A Letterhead Design For Your Business Letters

Why is Contact Energy (NZX: CEN) in news today?