Sultan Resources Ltd (ASX:SLZ), a Gold and Base metals explorer, released the activities quarter report for the quarter ending 31 March 2020. The explorer owns prospective Gold, Nickel, Cobalt and Base metals projects in the neighbourhood of recent discoveries. Sultan is a Western Australia focussed yet, a diversified explorer with 4 major projects which are-

Additionally, the explorer entered into a binding agreement to acquire Colossus Metals which holds 100% stake in the gold and copper exploration tenements located in Central New South Wales. Sultan considers the exploration projects to be highly prospective which would diversify the company’s portfolio and further complement the existing projects.

Overview of Colossus and the Projects

Colossus Metals owns 3 exploration licenses, namely EL8734, EL8704 and EL8735, stretching over a vast area of ~330 square kilometres. The project is in the Lachlan Fold Belt and is highly prospective for both gold-rich, alkali, gold-copper porphyry mineralisation and the alluvial gold mineralisation.

EL8735, the exploration license overlaps with sections of the Northern Molong Volcanic Belt which prominently indicates the presence of porphyry Au-Cu-Mo, epithermal gold, gold-rich VMS and orogenic gold over the licensed area.

The au courant reader must know that the often-found Lachlan Fold Belt deposit type is porphyry Au-Cu and Lachlan hosts Newcrest’s Cadia-Ridgeway Gold operations, one of the largest in the country functioning at huge scale with minimum operating costs.

The southern tip of the EL 8735 consists of Big Hill magnetic complex which extends over 12.5 square kilometres and is a high amplitude magnetic high region. On the opposite end of the exploration license is the Rinagroo porphyry Cu-Au prospect.

During the quarter, Colossus progressed on the field exploration works at the Big Hill and Ringaroo targets. The exploration program included a sampling of rock chips and thorough soil sampling with additional samples being collected from the Tucklan prospect, which is located within the exploration license EL8734.

Colossus identified prospective geological features suggesting the presence of porphyry style mineralisation, on conducting the field reconnaissance and mapping exercises at the Big Hill target. Various veins at the Big Hill magnetic complex hosted in the feldspar porphyry rocks have surfaced on top of the magnetic anomalies. The historic exploration programs suggest outcropping of secondary copper mineralisation including malachite, azurite, chrysocolla and chalcocite at the prospect. The Geological mapping disclosed the hydrothermal alteration styles in line with the Cadia/Boda style alkaline porphyry mineralisation.

During the March quarter, Sultan conducted the 991 metres RC drilling program, on 5 RC holes targeting extreme gravity anomalies along the strike of the Challenger gold mineralisation and down dip. 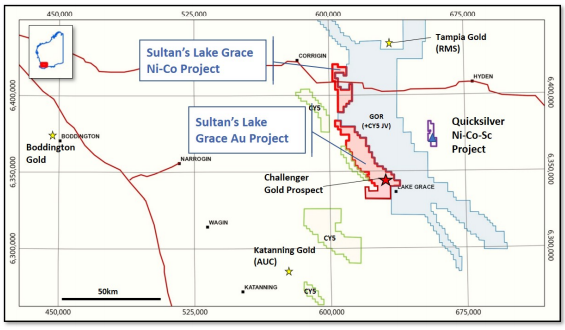 Sultan conducted a ground gravity survey in late 2019; the anomalies from the survey were tested during the recent drilling program.

The Lake Grace Gold project is located in the vicinity of the Ramelius mega Tampia deposit with over 485,000 ounces of Gold reserves and 675,000 ounces of gold mineral resources. All 5 drilling holes intersected with large mafic material indicating continuous zones of disseminated sulphides with multiple granular quartz-rich bands with sulphidic margins with the mafic rocks. 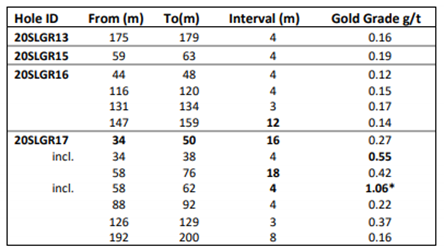 The drilling result substantiates large scale gold mineralisation at Challenger. The drilling intersected a wide interval of gold anomalous mafic rocks and has stretched the strike of the higher grade. An intersection of length 1 to 4 metres with gold grades in excess of 12 grams per tonne is not uncommon.

The correlation of the shallow aircore anomalism and the bedrock gold intersections indicate large gold mineralised mafic rocks that remain open and untested in all directions.