With Strong Results from Big Hill and Tucklan, Sultan Turns to Ringaroo Prospects

Australia focused experienced Gold and base metals explorer Sultan Resources Ltd (ASX:SLZ) is strengthening its presence in the emerging mining centres with recent mineral discoveries in the vicinity. Sultan holds key projects in its portfolio, with the latest agreement on the acquisition of Colossus Metals and its assets in the Macquarie Arc of the Lachlan Fold Belt. In addition, Sultan also owns four Gold, Copper and Nickel projects in the Yilgarn Craton of Western Australia-

Sultan entered into a binding agreement with Colossus Metals to acquire the prospective Gold-Copper porphyry asset in the Macquarie Arc. Colossus controls three major deposits namely, the Big Hill, Tucklan and Ringaroo which stretches over a 330 km2area in the heart of the Lachlan fold belt, which also hosts the Alkane Resources’ (ASX:ALK) mega Boda discovery and Newcrest Mining’s world class Cadia-Ridgeway Gold-copper operations. 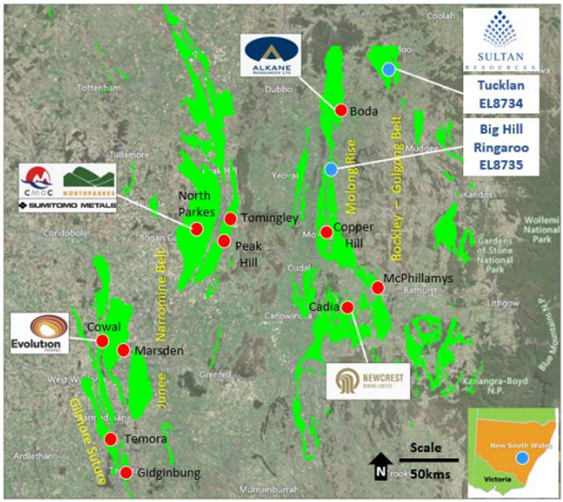 Sultan’s board and management team remain committed to exploring across the portfolio prospects to discover gold and base metals following a strategic exploration plan implementing modern exploration technique to generate value for the company, its shareholders and the local community.

Sultan recently announced the soil and rock chip assay results across the Big Hill and Tucklan deposits. The rock chip and soil sampling campaign at the Ringaroo porphyry Cu-Au prospect is already underway in the north of the granted exploration license EL8735. 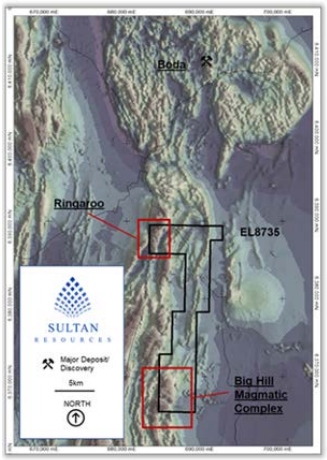 Ringaroo is located south of the Alkane Resources’ Boda Cu-Au porphyry discovery, which reported an intercept of 689 metres with 0.46 grams Gold per tonne and 0.19% Copper. In addition, the Ringaroo targets are located along the strike of Impact Minerals’ Apsley target. Impact recently announced that its Apsley deposit indicated geochemical similarity to the Cadia-Ridgeway and North Parkes Gold mines with strong potential to host an extensive mineralisation system.

Sultan Hits homerun with Gold and Base Metals Projects in the Lachlan Fold Belt: Must Read

The rock and soil sampling at the Big Hill prospect revealed a 6 Km long series of copper and gold anomalies with classic porphyry which indicated extensive vast targets. The initial phase is focussed on the Gowan Green, Big Hill and Wattle Ridge. The deposit showcased classic geochemical Cu-Au porphyry anomalies.

Further Induced Polarisation (IP) survey is planned to test the geochemical anomalies targeted to uncover prospective Au-Cu porphyry to identify the drilling targets for the maiden program. Sultan holds over $2 million cash and is well placed to undertake and make progress on further exploration programs.

All financial information in Australian dollars, unless stated otherwise.