Sultan Resources Limited (ASX: SLZ), an experienced explorer and possible developer, announced the first phase of soil and rock chip assay results from the Big hill prospect, one of the 3 key prospects of the Colossus controlled project in Macquarie Arc. Earlier, last month, Sultan entered into a binding agreement to acquire 100% of Colossus Metals Pty Ltd that holds critical Gold and Copper exploration licenses, in the Lachlan Fold Belt of the new South Wales. This is Sultan’s first and only venture out of Western Australia but still focussed on one of the trending gold mining regions. 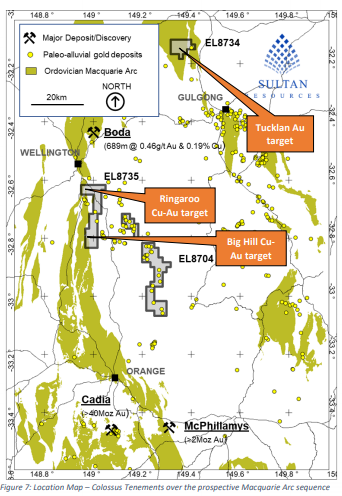 Earlier, Sultan announced its plans to accelerate the exploration programs at the Macquarie Arc gold and copper porphyry project in the Lachlan Fold Belt, the first phase of soil and rock chip sampling results from the Big Hill deposit are already out within just weeks of shareholders’ approval for the acquisition of the project.

One of Australia’s largest gold mine, the Newcrest operated Cadia-Ridgeway operations produced over 913,000 oz of Gold with 91 kilo tonnes of Copper at an AISC of US$132 an ounce of Gold. The region came into limelight when Alkane Resources announced the mega drill discovery with an intercept of 1,167 metres with 0.55g/t Au, 0.25% Cu, 75 metres downhole at just one of the recently drilled holes. Mining players of all scales including the majors have been seeking to secure an exploration ground in the gold and copper porphyry rich Lachlan Fold Belt.

The Colossus controlled project included 3 prospective targets at Big Hill, Ringaroo and Tucklan. The current exploration program aims to identify the priority drilling targets with strong prospectivity to host Au-Cu porphyry and/or epithermal gold mineralisation, one of the characteristic mineralisation of the Lachlan Fold Belt. The assayed results include the results of the soil and rock chip samples from the Big Hill prospect.

The recently conducted soil and rock sampling program revealed a series of gold and copper anomalies with classic porphyryy indicating large scale targets.The rock chip and soil assayed samples from the western flank which holds 6 kilometre long magnetic anomalies have been understood to contain classic porphyry geochemical of the gold and copper anomalies. The overlap of the mineralised rock chip samples with the magnetic anomalies further defines the large-scale nature of the mineralisation system.

The geochemical signature is associated with concentrated disseminated pyrite in altered basaltic andesite volcaniclastic breccias. A strong Sulphur of up to 6.14% and 9.0% Na2O has been recorded. 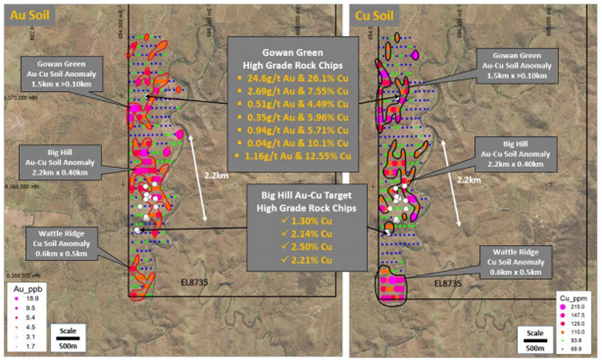 Sultan identifies the region as underexplored with no significant indications of historical drilling programs. The current exploration program will continue to test the prospective porphyry-style Au-Cu and/or epithermal gold mineralisation at Big Hill, Ringaroo and Tucklan.

The results from the big Hill prospect falls in line with major porphyry mineralisation in the Molong Belt similar to Newcrest’s Cadia and Alkane’s Boda discovery.

Further geological sampling and high-resolution ground induced polarisation (IP) geophysical survey is anticipated at the Bog Hill prospects in the coming quarter. A soil and rock sampling at Ringaroo have already commenced with Tucklan expecting the sampling and mapping program in the future. Sultan is well placed to meet the exploration requirements both financially and technologically for future exploration programs at the targets.