While Gold in USD is at 9 year high continuing its strong momentum, Australian gold explorer Musgrave Minerals Limited (ASX: MGV) is ramping up its gold-centric efforts, beefed up by its extensive resource potential. The company, on the back of robust resources and high-calibre guidance, appears to be on the vantage point to leverage substantial advantage it holds on the exploratory terrains of Western Australia.

Notably, the discovery of high-grade Starlight link lode followed by the White Light lode at the project’s Break of Day deposit is primarily significant to Musgrave’s targeted gold exploration endeavours.

The steadfast strategic efforts are backed by robust infrastructure and strategic attraction with the nearby presence of five third-party mills having the capacity for high-grade feed, along with analogous setting to Great Fingall, situated 30 kilometres to the North. 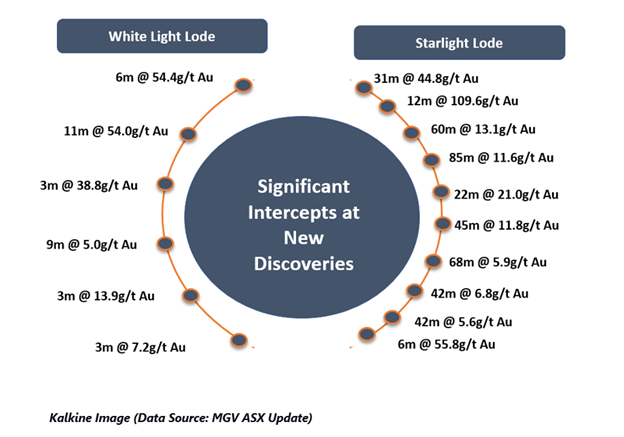 The starlight lode sitting outside the existing resource of Break of Day opens search space and creates further opportunity catalysing the growth. Reverse Circulation (RC) drilling has confirmed the Starlight discovery and near-surface high-grade in several individual lodes. Starlight lode is of over 115 strike and remains open to SE and down dip.

Multiple untested or analogues remain in the Starlight setting. Musgrave has planned 5,000m aircore/RC drilling, with the drill testing for new targets expected to commence in mid-August 2020.

The new White Light discovery, which is located 75 metres south of Starlight, also lies in proximity to Break of Day resource, but outside the existing resource. With over 100 metres of strike, it remains open to the southeast and down dip and has the potential to make further discoveries.

Cue Gold Project is a big system of over 28 kilometres of shear zone, hosting JORC resources above 613koz, which is still growing. The project portfolio includes Break of Day & Lena resource areas and Mainland that is 100% retained by Musgrave Minerals. While, there is Earn-in JV with Evolution on Lake Austin.

Break of Day holds an Indicated and Inferred resource of 868kt @ 7.2g/t Au for 199koz Au over more than 800 metres of a combined strike of high-grade shoots, open down plunge and along strike. Resource drilling is carried only to 250 metres, and the resource is amenable to open pit and underground mining.

Near-surface gold in multiple lodes is discovered at the deposit over 1.5km strike, while the resource is calculated to 430 metres.

The excellent infrastructure enjoyed by the Cue Gold Project opens vast corridors for multiple development options. The project is surrounded by significant gold producers such as Westgold Resources (ASX:WGX), Ramelius Resources (ASX:RMS), with their mills only 40 kilometres away. High-grade ore as supplemental feed can be trucked a long distance.

Musgrave over the Lake Austin portion of the Cue Project has executed an $18 million Earn-in and Exploration Joint Venture with Evolution Mining Ltd (ASX:EVN). The Earn-in and Exploration Joint Venture excludes The Break of Day, Lena, and Mainland areas. Under variable thickness dune and lake cover, multiple new high priority gold targets have been discovered.