The new lode confirmed from RC drilling with new intercepts aligning with several historical isolated gold intersections has a strike extent of over 100 metres. Notably, the intersections of both Starlight and White Light lodes sit outside the existing Break of Day resource and remain open to the southeast and down plunge where drilling is continuing.

The high-grade gold intersection along with the exciting discoveries from Starlight seems to be bolstering the strategic gold-centric endeavours of the company. Commenting on the recent discovery, Musgrave Managing Director Rob Waugh indicated it to be another positive result for Musgrave as it moves ahead to build the high-grade gold resource base at its Cue Project.

He further stated that as the drilling is continuing, the company is confident of extending the lodes and making discoveries on the back of growing geological knowledge of the system.

Following the new White Light discovery, the company has extended its RC drill program, eyeing for a resource update late in Q3 2020.

Glimpse at the Break of Day RC Drilling Program 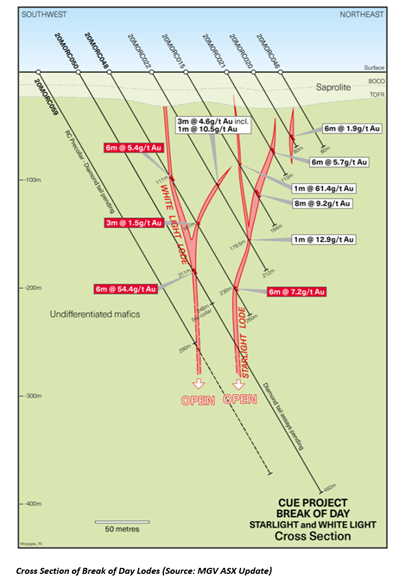 The mineralisation typically dipping steeply to the south consists of quartz lodes, hosted within a foliated and altered basaltic stratigraphic sequence.

The ongoing drilling at both lodes have a focus on infilling and extending the high-grade gold mineralisation and will also pursue testing for new lodes within the Break of Day and Lena system.

The current RC drilling program, which thus far has completed a total of 42 RC holes with assay results for 31 holes received, has been extended following the discovery of the new White Light lode.

Musgrave reported assay results for an additional 12 RC drill holes from the existing program at the new Break of Day-based new Starlight gold discovery. The company will resubmit all 6m composite samples above 0.1g/t Au for individual 1m sample analysis. The significant new intercepts include: