The drilling is geared towards extending and infilling the new high-grade lode where high-grade Starlight mineralisation has been intersected over a strike length of more than 115 metres and remains open down dip.

MGV stock settled the day’s trade 73% up to $0.260 on 3 June 2020 following the significant mineralisation update.

The ongoing RC Drilling Program is undertaken at the new Starlight Link-lode at Break of Day deposit which is located at Musgrave’s wholly owned ground at Cue Project in WA’s Murchison District. Notably, the RC program consisting of more than 36 holes for ~7, 000 metres is approximately 60% complete.

Significantly, the intersections in all drill holes sit outside but interpreted to lie proximal to the current resource at Break of Day, within an east-west mineralised zone.

The mineralisation comprises of multiple quartz lodes dipping steeply to the south and has now been defined over a 115 metres strike extent and remains open down plunge. Besides, extremely high-grade mineralisation is shown by the new drilling where it approaches the surface. 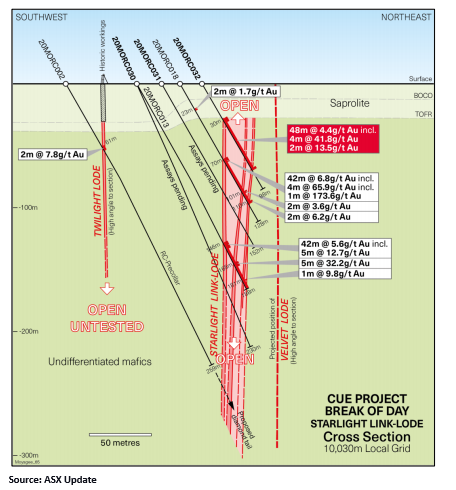 Aiding with Starlight’s ongoing assessment, Musgrave is expected to receive $150,000 as its application was successful for a grant under the Western Australian Government’s 2020-21 Exploration Incentive Scheme (EIS). The fund, as part of the EIS’s Co-funded Drilling Program, is directed towards diamond drilling deep extensions to the mineralisation.

Lens Through the Results

A combination of one-metre individual samples and six-metre composites have been analysed from the RC holes drilled in the ongoing Starlight Program. All 6 metre composite samples above 0.1g/t Au will be re-submitted for individual 1 metre sample analysis.

The regional aircore geochemical drilling program (phase 1) on Lake Austin completed. Results to be reported on receipt of final assays.