Australian And US Equity Market Weakens Amid Global Growth Fears

The shares of the Costa Group plunged the most by 27.6 per cent to AUD 3.75 today after Australia's biggest horticultural company announced that its results will be weaker than expected for the CY.

The Australian shares dropped to a post-election low as the increased risk of a US recession sparked another sell-off on Wall Street. All three major benchmarks – Dow, S&P 500 and Nasdaq, closed lower on Wall Street on Wednesday.

A few days ago, US President Donald Trump informed that the US is not ready to make a trade deal with China. Escalating the trade war with China, Mr Trump also targeted Huawei Technologies Co. recently by cutting it off from every United States partner at the risk of a long-term rupture in US-China trade deal.

According to a recent research, further escalation in the US-China trade dispute could trim the global GDP by 600 billion dollars annually within two years.

All the sectors closed in red on the S&P/ASX 200 today except the Communication Services Sector that gained 1.13 per cent at AUD 1290.6. 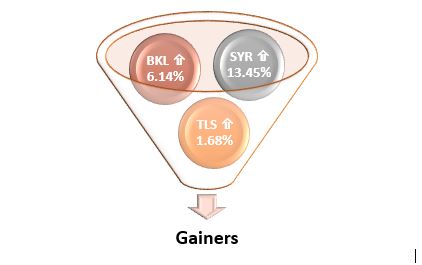 Recently, an industrial minerals and technology company based in Australia, the Syrah Resources Limited (ASX: SYR), released the Annual General Meeting Presentation in which it highlighted that the company is at an early stage of attractive five-year strategic growth plan underpinned by current strong foundations. The company’s stock soared 13.45 per cent today, closing at AUD 1.265.

In a Shareholder Briefing Presentation, Australia’s leading natural health company, Blackmores Limited (ASX: BKL) mentioned that the company has generated a revenue of AUD 460.1 million in the nine months to 31st March 2019, up by 6 per cent relative to the prior corresponding period. BKL’s closed today at AUD 99.0, improving 6.14 per cent.

The stock of the leading telecom company, Telstra Corporation Limited (ASX: TLS)ended up higher at AUD 3.630 today with a gain of 1.68 per cent in comparison to the previous closed price. The company recently informed that as a result of good progress on its T22 strategy, it expects to make a non-cash impairment of legacy IT assets and anticipates an increase in restructuring costs in FY19.