During the Q3 FY2019, BKL made a net profit of $10 million, down by 43% compared to pcp. The revenue generated in the current quarter was down by 4% on pcp to $141 million. However, the operating expenses also declined during the period by 1% on pcp, which helped the company to invest in its brands.

On the Q3 results, interim CEO Marcus C Blackmore AM stated that the Q3 FY2019 remained a challenging period for the company. However, this outcome does not reflect the long-term growth potential of the business. The company is committed to majorly streamlining its business by simplifying and improving its processes and structure.

He also highlighted that the company, for the last three years, has been targeting to save $60 million through a business improvement program. For this purpose, the company is making investments in key strategic initiatives, in building its capability along with the delivery of overall margin improvement. 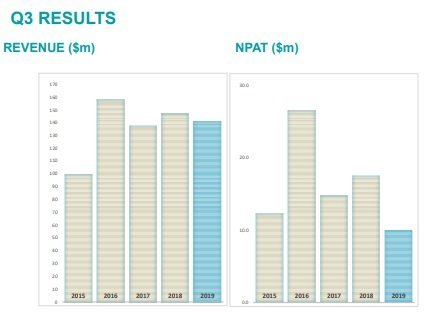 In Australia, Blackmores ranks number one in the VDS brand, with 14.9% as the domestic market share, with a growing gap over its nearest domestic competitor. In this region, the gross margins improved by 2.1% during the quarter, which was driven by an intentional move to clear existing inventory in China channels, by temporarily reducing the volume of China-bound stock through Australian retail channels.

From Australia and New Zealand region, the total revenue generated during the period was of $54 million, a decline of 26% on p

The sales in the China segment went up by 19% during the quarter as compared to pcp. The sales comprise of both the in-country and export sales. Also, after the implementation of the new China E-commerce Law in the quarter, there was a fall in the sales to the Chinese consumers through Australian retailers.

Across Asia, the company reported strong growth in sales in several markets. The sales in Taiwan increased by 81%, Hong Kong by 18%, Korea by 13% and Malaysia was up by 32%. The Indonesian JV of the company has grown strongly during the period, up by 99% in the quarter on pcp. As per the business plan, the JV is reaching profitability along with the solid trajectory.

Overall, from the other Asian segment, the company’s revenue was up by 32% on pcp.

BioCeuticals Group (owned by Blackmores) grew its market leadership in the practitioner category, as well as innovateD in both product development and education resources.

The phase one of the trial of medicinal cannabis is completed now, and the company expects the results to come in the latter part of this year.

Blackmores Institute launched the 10th edition of the Complementary Medicines Interactions Guide, in order to promote the quality use of complementary medicine and support healthcare professionals in practice.

The announcement also highlighted, that the company had supported two significant announcements from the Federal Government. The first one was the decision to ban 16 natural therapies from receiving Private Health Insurance rebates, for which the government has commissioned an independent review. The second one was the government’s work to resolve an ACCC restriction on complementary medicines being marketed as “Made in Australia”. 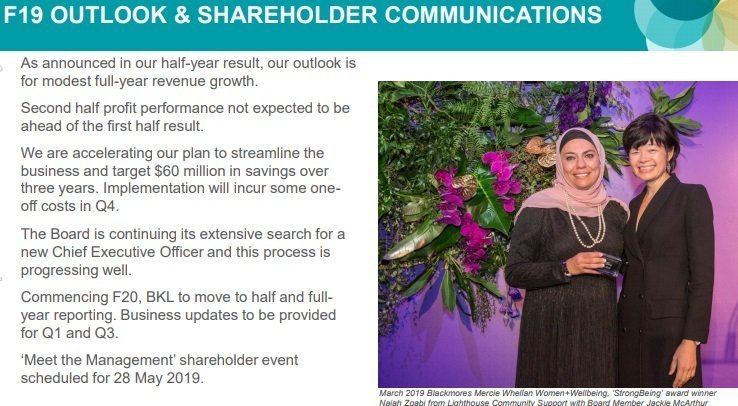 Also read: The change in the leadership structure after the CEO’s resignation.

By the closure of the trading session, the shares of the company were at a price of A$88.300, down by 1.56% from its previous day’s closing price.