Alice Queen Limited (ASX: AQX) is an ASX listed player that is entirely focused on gold exploration and mining opportunities across Australia. Backed by an experienced team of mining executives, the company is focused on achieving long-term value creation, driven by the growth of its key investments.

Alice Queen has a diversified project portfolio, including

On the Molong Volcanic Arc, Alice Queen has tenements, including EL8469 (Mendooran), EL8563 (Mendooran North), EL8565 (Mendooran South) and EL8646 (Yarindury). Recently, on 19 September 2019, the company announced an enhanced prospectivity of its projects in the North Molong Belt. The enhanced prospectivity at the EL8646 Yarindury and EL's 8565, 8469 Mendooran projects is the outcome of exceptional copper-gold results within 700 metres of the boundary of the Yarindury project. 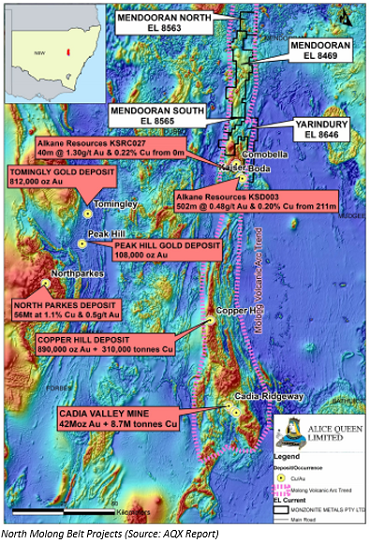 The discovery was unveiled by ASX-listed gold producer Alkane Resources Limited (ASX: ALK). KSDD003, the discovery drill hole of ALK, intersected gold and copper - 502 metres at 0.48 grams per tonne and 0.20 per cent from 211 metres, respectively. On the basis of magnetic data, the highly prospective Cadia-age rocks that were intersected at Kaiser-Boda extend at surface that is adjacently into the Yarindury project in a thin strip potentially 700 metres wide west to east and over 5 kilometres long south to north.

It is expected that significant mineralisation would extend eastwards into EL8646 Yarindury, in case Kaiser-Boda proves to be a Cadia-scale (7 kilometres by 2 kilometres) porphyry field. Alice Queen would be performing surface mapping, in addition to sampling, on this adjacent area with the aim of developing near-term drilling targets. These activities are a priority for the company.

Additionally, the prospectivity of all projects of Alice Queen in the North Molong Belt has been boosted, owing to the fact that the Yarindury and Mendooran tenements extend over magnetic high features covering the same belt of rocks in areas that are under younger cover. Moreover, most of these areas have never been drilled.

According to Alice Queen’s Technical Advisor John Holliday, in nearly last 20 years, Alkane Resources’ discovery is the best porphyry exploration discovery in the Lachlan Fold Belt, away from Cadia, Cowal and North Parkes, which are the three key mine centres. Exploration activities of Alkane have demonstrated that these magnetic high features may be monzonite intrusions driving porphyry copper-gold mineralisation. 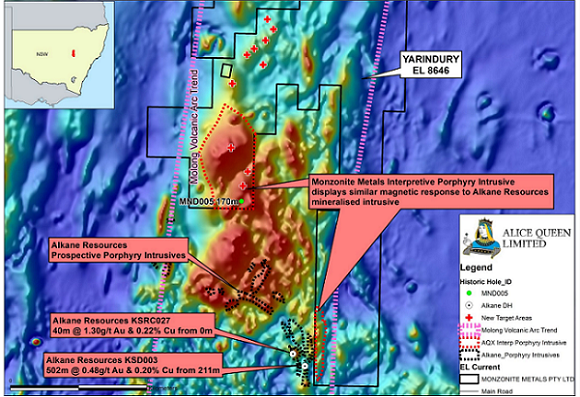 The projects in the North Molong Belt of Alice Queen represents more than 650 square kilometres of highly prospective ground of the Molong Belt, north along strike from Cadia as well as adjacent to the recent discovery holes of ALK.

Owing to the enhanced prospectivity of its North Molong Belt projects, Alice Queen is planning to work on a maiden drill program at the Yarindury project, aimed at testing some of these magnetic highs. Additionally, the company intends to initiate geological mapping in the area that adjoins the boundary of Alkane Resources, with the geological mapping targeted towards defining the extent of the Molong Volcanic rock into the Yarindury tenement.

In September 2019, the company also entered a binding agreement with Datt Capital, which is an investor in the resources sector, for a placement, aimed towards raising AUD 1.5 million through the issue of 50 million ordinary shares at 3 cents per share. With the completion of this placement, Datt Capital would hold a 6 per cent stake in AQX, becoming the third largest shareholder in the company.

The company plans to use the funds towards its upcoming drilling operations in New South Wales, in addition to its working capital requirements.