Alice Queen Limited - The Board and Management Summary

Mining is the process of extracting valuable minerals or other useful materials from the surface of the earth. Globally, mining is one of the oldest industries and attractive space for both businesses and investors. Australia is one of the major economies known for mining activities across the globe.

Gold is a commodity as well as a monetary asset. Australia is amongst one of the top global producers of gold, with over 65 operating gold mines. Moreover, it is estimated to hold the largest gold reserves in the globe. In 2016-17, the country produced 288 tonnes of gold.

Headquartered in South Yarra, Victoria, Alice Queen Limited (ASX: AQX) is an exploration and development company, which is focused on a range of exploration and mining opportunities in its homeland. The company targets assets rich in gold and copper. The company, which was listed on the Australian Stock Exchange in September 2004, is diligently working to deliver shareholder value through progressing its diversified project portfolio.

AQX holds a majority stake of 84.5 per cent in Horn Island, which is situated in the Kaurareg Archipelago of the Torres Strait in Queensland, Australia. Horn Island is the flagship gold project of Alice Queen. Another major project of the company is located in New South Wales, the Mendooran copper/gold porphyry project, in which it holds a 90 per cent stake. The company is also working on the Kaiwalagal (84.5 per cent stake) project in the Torres Strait and the Yarindury (90 per cent stake) project in New South Wales. 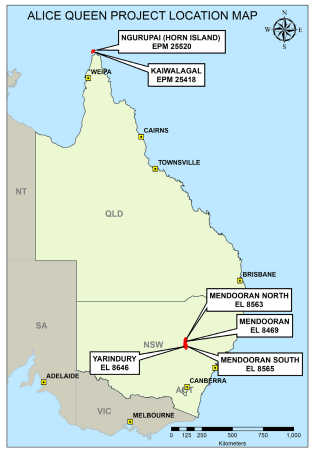 Horn Island and Yarindury are the two major projects of the company. For the Horn Island project, which is believed to hold the potential to emerge out as gold deposit of large scale, the company has concluded diamond core drilling to more than 18,000 metres in depth, enabling Alice Queen to build an inferred resource of 7.9 million tonnes at the rate of 1.9 grams per tonne of gold for 492,000 ounces of Au. Yarindury located on the Exploration Licence 8646 is considered as a rare opportunity for AQX, as the project would allow the company to test drilled targets (unexplored earlier) for quality porphyry with a relatively shallow cover on the premier porphyry geology of Australia.

Meet AQX Board and Management

Alice Queen has gathered a team of experienced mining executives who have corporate as well as technical skills that are required to help the company in advancing its projects in the Australian states - Queensland and New South Wales. The company’s mining executive team is focused as well as committed towards ensuring smooth functioning of its mining operations and fruitful functionalities. Its board and management comprise of skilled and qualified professionals –Phillip Harman, Andrew Buxton, Andrew Muir and Anne Adaley.

A geophysicist, Mr Phillip Harman, the current Non-Executive Chairman of AQX, holds experience of serving the board of a range of mineral exploration companies that are listed on the ASX. He holds extensive knowledge of capital markets, in addition to expertise in the creation as well as management of junior exploration companies.

Mr Harman has over three decades of experience in working for global resources company BHP Group Ltd (ASX: BHP). During his tenure at BHP, he specialised in the exploration of minerals. Moreover, he handled technical and managerial positions like Chief Geophysicist, Manager of Discovery Technology and Exploration Manager, catering to markets including Australia and South America. Additionally, Mr Harman spent five years as the Managing Director of Gravity Diamonds Limited (ASX: GRN).

Mr Andrew Buxton is the founder of Alice Queen Limited and was appointed as the company’s managing director in November 2015. Having worked for a wide range of industries such as resources, gaming, property and media, Mr Buxton holds around 25 years of work experience. He has specific experience in handling responsibilities related to corporate finance, capital raising and generation of resources exploration projects.

Prior to working at Alice Queen, Mr Buxton served as the Managing Director of ASX-listed lithium explorer Kidman Resources Limited (ASX: KDR). Additionally, he was the co-founder and a board member at Media Entertainment Group Limited, which is engaged in media and print advertising, in addition to program and advertising and program distribution.

Mr Andrew Muir is a new addition to the company’s board. His appointment as a Non-Executive Director was announced by AQX in the month of June 2019. He is an experienced gold geologist and finance executive, holding extensive experience in the resources sector. He has worked for several leading broking houses including JP Morgan, Hartley’s and PCF Securities as a Resource Analyst.

The company is expecting Mr Muir to support AQX in its target towards progressing its two major projects, namely Horn Island gold project and the Mendooran gold project, towards producing operations.

He is also serving NTM Gold Limited (ASX: NTM), an ASX-listed gold explorer, as its Managing Director. Mr Muir has also handled the position of an associate director at Argonaut Capital in its corporate team.

Holding wide experience in the resources sector, Anne Adaley, the Company Secretary of AQX, is a qualified accountant. She is also serving as the principal of Australian Mining Corporate and Administrative Services Pty Ltd. Additionally, since 2010, Anne is holding the Chief Financial Officer and Company Secretary roles at Tellus Resources Ltd.

Her previous experience of more than 25 years is with several ASX-listed exploration and mining companies, wherein she held senior management roles, including the positions of Company Secretary and Group Financial Controller to Gympie Gold Limited in 1997. She also served Climax Mining Limited during 2005-2006, as its finance and administration manager. While at Monaro Mining NL, she held the roles of Chief Financial Officer and Company Secretary during 2007-2009.

The advanced gold explorer, Alice Queen Limited has a market cap of ~ AUD 12.31 million with approximately 723.83 million outstanding shares. The AQX stock closed is trading at a price of AUD 0.016 on 06 September 2019 (AEST: 1:18 PM). Further, the stock of AQX has provided returns of 54.55 and 30.77 per cent in the last one month and six-month respectively.