South Yarra, Australia-based Alice Queen Limited (ASX: AQX) is an exploration company, which is engaged in the development of several exploration and mining opportunities focused on gold and copper in Australia. The company, which got listed on the Australian Securities Exchange in September 2004, holds a majority stake of 84.5 per cent in the Horn Island Gold Project in the Torres Strait, Queensland and a 90 per cent stake in the Mendooran copper/gold porphyry project in New South Wales. Other projects of the company are Kaiwalagal (Torres Strait), in which it owns an 84.5 per cent stake, and Yarindury (New South Wales), in which AQX holds a 90 per cent stake. 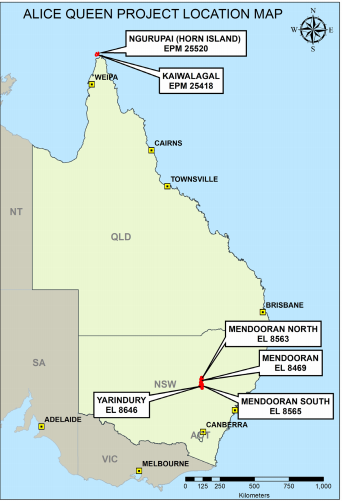 Recently on 14 August 2019, the advanced gold explorer made an announcement, unveiling to have secured commitments from investors for a capital raising program. Under the placement, the company intends to raise AUD 516,000 before costs through the issue of 43 million ordinary shares and 21.5 million free-attaching options (one free-attaching option for every two shares subscribed).

The shares would be issued at a price of AUD 0.012 or 1.2 cents per share, as part of the company’s 10 per cent placement capacity under ASX Listing Rule 7.1A, while the unlisted free-attaching options would be issued under the company’s 15 per cent capacity under ASX Listing Rule 7.1. The free-attaching options have an exercise price of AUD 0.02 or 2 cents, with the expiry scheduled in 18 months from the date of issue.

According to the market update, the issue of shares and options, in addition to the placement completion, would be subject to the submission of a prospectus. Alice Queen is likely to lodge the prospectus in the coming days.

The funds received from this raising would be directed towards the initial drilling program at Yarindury. The company would also use the proceeds to cater to its other working capital requirements.

The company had recently published its quarterly cash flow statement and as per the report at the end of the June quarter 2019, the company had cash and cash equivalents of AUD 64,000.

In New South Wales, AQX has tenements – EL8469 (Mendooran), EL8563 (Mendooran North), EL8565 (Mendooran South) and EL8646 (Yarindury), on the Molong Volcanic Arc. The Yarindury project is along trend from the Cadia-Ridgeway mine (50m oz gold + 9 m tonnes copper), which is operated by gold mining company Newcrest Mining Limited (ASX: NCM). The Cadia Valley on the Molong segment of the Macquarie Arc is the host geology for all of the major deposits of porphyry in Australia.

In April 2017, AQX and NCM’s subsidiary Newcrest Operations Limited reached an option and farm in deal, according to which Newcrest can make an investment of AUD 10 million over a 9-year period to earn a maximum of 80 per cent of certain of the projects of Alice Queen located in New South Wales. 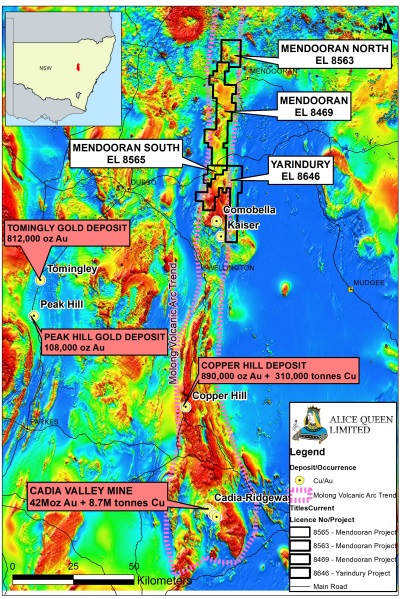 Alice Queen updated the market on 07 August 2019 that the Yarindury project is drill ready, with drilling preparations being underway. For the highly prospective Cu/Au porphyry project, which hosts early Silurian-Ordovician rocks of the Molong Volcanic Belt (MVB), the company has already completed extensive geophysical program and interpretation. The company plans to drill highly prospective copper/gold porphyry targets at the Yarindury project. Mr John Holliday, the technical advisor for porphyry of Alice Queen, had generated six targets along strike from Cadia, based on geophysical and historical drill hole data. Resource Potentials had completed a review and interpretation of geophysical data in the month of March 2019.

The six undrilled highest priority targets are in that area of the project that has relatively shallow cover, with an average interpreted depth of less than 200 metres in the north western part of the tenement. The lack of historical exploration, owing to the cover presence, masks the underlying geology. The target areas hold the most attractive magnetic, in addition to gravity, features for a porphyry setting. These magnetic features have shapes that are pointed and accurate, probably due to intrusive (porphyry) rocks. If required, the company could test these features under a RC drilling with a core tail. 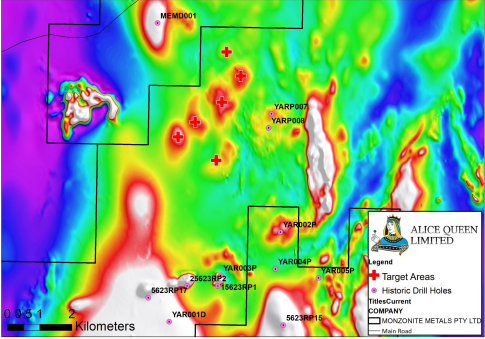 Expressing his excitement towards the project, Mr Andrew Buxton, the Managing Director of Alice Queen, said that the project holds a range of exciting kilometre scale gold-copper porphyry targets and the company is pleased to restart exploration activities at its porphyry projects located in the southeastern Australian state of New South Wales, added Mr Andrew.

Mr Andrew further stated that Mr John Holliday would generate the company’s undercover Molong Volcanic Belt projects. Mr John Holliday, who has finished the generation of drill targets at Yarindury, was also the co-discoverer of the Cadia Valley of Newcrest and the Chief Technical Advisor for porphyry for the company. Meanwhile, the Technical Advisor mentioned the Yarindury project as a rare opportunity for the company to perform testing on previously undrilled quality porphyry targets “under quite shallow cover on the premier porphyry geology of Australia”.

Alice Queen Limited has a market cap of ~ AUD 10.21 million with ~ 680.83 million outstanding shares. The AQX stock was trading at a market price of AUD 0.014 on 16 August 2019. The Australian listed public company has provided a 25% return in the past one month.