New Executive General Manager on Board

Mr Jørn Skov Nielsen is likely to play a key leadership role at Greenland Minerals. He is expected to drive in-country activities pertaining to the Kvanefjeld rare earth project, the Company’s primary focus that is positioned to be a future cornerstone to global rare earth supply.

Reportedly, Mr Nielson’s role would particularly revolve around licensing and regulation in Greenland and Denmark, along with commercial developments into Europe.

Mr Mair believes that this new addition to the Company is a key step in building the in-country capacity to develop a globally significant international rare earth business from Greenland. 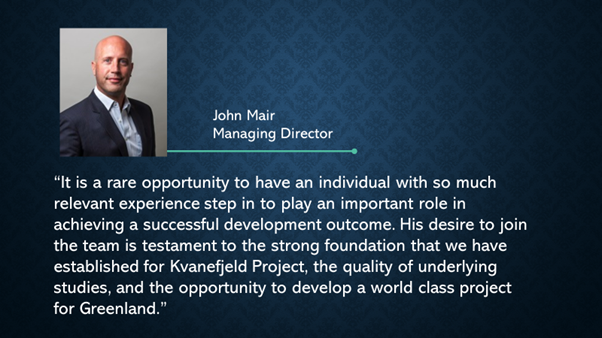 Acquainting with Mr Jørn Skov Nielsen & His Role at GGG

Based in Nuuk, Greenland, Mr Nielsen is an economist and carries extensive managerial experience from over a decade. He has worked across a cross section of senior roles within the Greenland administration.

He has been a Deputy Minister for several areas including industry, mineral resources, trade, energy, research and labour, wherein he led government delegations and presented to significant audiences across Asia, Europe, Australia and North America, attracting foreign investment while promoting interests of Greenland.

Well-experienced in international government as well as commercial negotiations, Mr Nielsen has witnessed negotiations that led to privatisation of a publicly owned supermarket business. He is also is a former board member in the financial sector.

Notably, Mr Nielsen carries in-depth understanding of the Greenlandic society and business sectors, which coupled with vast career experience places him well to join the Company at a pivotal time to strengthen in-country leadership and organisational capacity.

He acknowledged his appointment at Greenland Minerals, looking forward to being a part of the high-quality work undertaken by the Company to develop a project with far-reaching strategic and commercial significance for Greenland and on a global scale.

“It is a unique industrial project that has the potential to become a world leader in the extraction of rare earth metals, thus contributing to improved energy efficiency, increasing renewable power generation capacity, and reducing greenhouse gas emissions on a world scale. The project further has a strong perspective in terms of supporting a long-term sustainable development of Greenland's business community, employment and knowledge building”.

GGG continued to make the progress on permitting of the Project through the March 2020 Quarter, with the main focus on completion of additional technical studies undertaken following Environmental Impact Assessment (EIA) reviews in 2019.

Subsequently, on 20 May 2020, an updated EIA was lodged with Greenland’s Environmental Agency for Mineral Resource Activities (EAMRA).

Let us cast an eye over recent developments at the Project:

The Project’s EIA is currently lodged with EAMRA. Once approved, the Ministry for Mineral Resources will be notified, who will manage the remainder of the licensing process, that includes formalising the public consultation process.

The Company is also likely to conduct the Annual General Meeting on 31 July 2020 at the Subiaco Arts Centre, in compliance with all relevant COVID-19 measures.