Rare earths are indispensable components of electric cars, wind turbines and even our smartphones. Seventeen different metals form the segment of rare earths (RE) and have gained rapid significance with the technological advances of contemporary times.

Interestingly, RE are essential for the development of the society, but it is relatively difficult to extract these critical minerals off the ground and put them into production.

Currently, China claims to hold over 80% of the global RE market. It holds both technology and value chain when it comes to the production and sale of RE.

Industry experts opine that the RE will be critically important in the future, and their demand is all set to surge. Tapping this opportunity is Greenland Minerals (ASX:GGG), an Australian company operating in the mineral-rich region of Greenland since 2007.

GGG’s Kvanefjeld RE Project is well-positioned to be a future cornerstone to global RE supply.

A large-scale, low-cost post development, the Project is believed to be a long-term supplier of products that will be at the centre of the unfolding revolution in the efficient use of energy.

To know about the Kvanefjeld RE project, PLEASE READ- Greenland Minerals well positioned to be a future cornerstone to global rare earth supply.

An emerging RE project in the Ilimaussaq alkaline complex in southern Greenland, the Kvanefjeld Project benefits from a unique geological setting. The project of global significance is GGG’s path to become a major western world developer and producer of rare earths.

The Company has been leveraging from a number of factors supporting the Project’s development, few listed below- 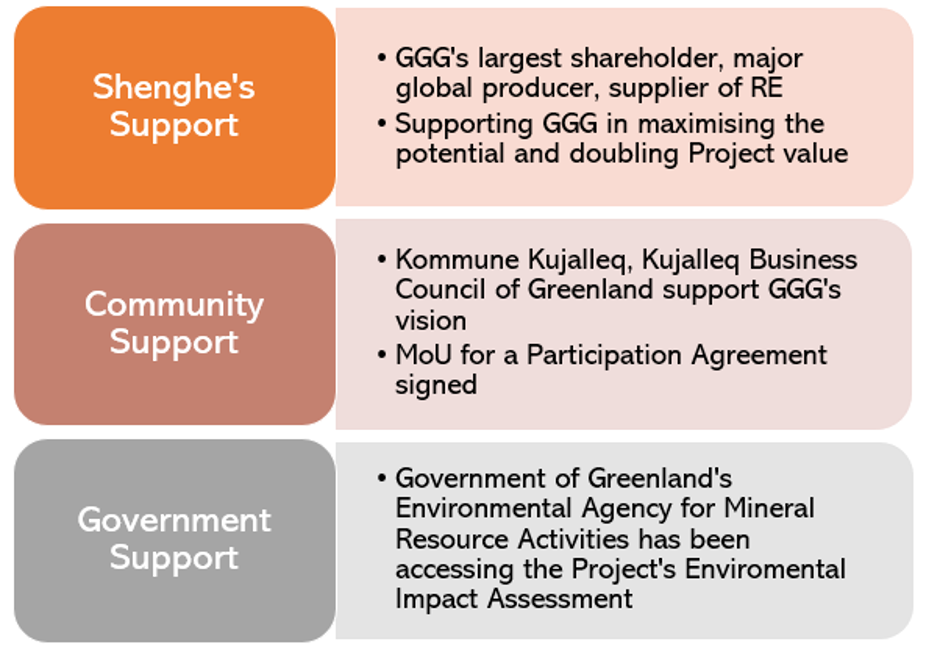 Shenghe Resources Holding Co Ltd has been a key player in the leading Chinese RE industry. It is the second largest RE company by output and has a global vision and customer network located across China, Europe, Japan, North America and the Middle East.

Shenghe investigated over sixty projects globally as part of their international strategy and the Kvanefjeld Project came out as number one.

It has full proficiency across the RE value chain; became GGG’s largest shareholder in 2016 and acquired 12.5% of shares in GGG.

Ever since, Shenghe has worked collaboratively with GGG and provided ample support to maximise the potential of the Project.

Recently, Mr Hu Zesong, CEO of Shenghe state that together both the companies have been working in collaboration wherein Shenghe has supported GGG’s management to maximise the potential and double the Project’s value.

GGG, on the other hand, has been leveraging from Shenghe’s existing knowledge and expertise base to advance the Project.

Recently, the delegation of both companies visited Denmark to participate in the Confederation of Danish Industry’s Greenland conference. Amid government, industry and media representatives from Denmark and Greenland, Mr Hu Zesong presented an overview on the outlook for the RE sector and the significance of the Kvanefjeld Project.

Last year in March, GGG signed an MoU with Kommune Kujalleq and Kujalleq Business Council, local communities of Greenland for a Participation Agreement supporting and supplementing the Impact Benefit Agreement, part of a successful mining licence application for the Project.

The Agreement focusses on skill development, regional businesses and workforce and showcases the vital community support for the Project as well as shareholder engagement.

In the December 2019 quarter, great progress was made in concluding the EIA, a key step towards project permitting. GoG’s Environmental Agency for Mineral Resource Activities (EAMRA), along with advisors reviewed EIA (Type 1) issues.

An updated EIA (incorporating few supplemental studies) is likely to be lodged with the GoG in late March 2020.

At the back of a proficient shareholder with sector expertise, the growing demand of RE across the globe and increasing international interest, GGG’s Kvanefjeld Project is on the right path to becoming a globally significant supplier of rare earths.