Penny Stocks To Watch Out For During September 2019 - VXR, HCH, GLN, VEN

An overview of Penny Stocks

Penny stocks are highly volatile in nature and faces an extreme high and low during the trading session of a day, which could drop the investors pulse and please them in an intraday session. When it comes to the definition, the price of penny stock is generally trade below 1 dollar.

Let’s get more acquainted with some ASX-listed penny stocks as mentioned below:

Venturex Resources Limited (ASX: VXR) is into the exploration of resources and has focus on base metals with a market capitalisation of A$48.98 million as on 4th September 2019.

Recently, the company through a release dated 4th September 2019, announced results from Reverse Circulation exploration drilling at its 100%-owned Sulphur Springs Copper-Zinc Project. The company has received assay results from the final holes of the programme with the 4 drilled holes identity BKR006— BKR009.

It was also mentioned in the release that assay results from drill-holes having identity BKR006, 008 and 009 had also witnessed numerous zones of highly anomalous proximal VMS pathfinder elements, which including Ag, As, Ba, Cd, Co, In, Mo, Sb and Tl associated with strong silica +/- sericite alteration at the Marker Chert horizon.

In another update, on 6 August this year, the company announced that Regent Pacific Group Limited and each of its related bodies corporate had made a change to their substantial holdings in VXR on 1 August 2019 with the current voting power of 12.659% as compared to the previous voting power of 14.328%.

VRX released cash flows statement for the period closed 30 June this year. The net cash outflow from the operating activities of the company stood at A$0.357 million following the major payments of A$0.688 million and A$0.375 million for exploration and evaluation as well as administration and corporate, respectively.

Moving to the stock performance, VRX stock last traded flat at A$0.175 per share on 4th September 2019. In the time frame of one month and six months, it generated a negative return of 16.67% and 30.00%, respectively. However, when it comes to the time period of three months, VXR stock has given a return of 2.94 percent.

ASX-listed Metals and Mining company Hot Chili Limited (ASX: HCH) has a market capitalisation of A$37.92 million as on 4th September 2019. The company is engaged into the exploration of minerals.

As per the release dated 28th August 2019, the company announced the addition of growth potential in parallel with the beginning of expansion drilling at its Cortadera copper-gold porphyry discovery.

The company stated that it has wrapped up the first diamond drill hole at a depth of 959.9 metres for the Phase 2 drill programme at the Cortadera copper-gold discovery. It added that a 2nd diamond drill hole is ongoing, and it is testing a potential 240-metre extension to the new high-grade zone discovered at the main porphyry– Cuerpo 3. 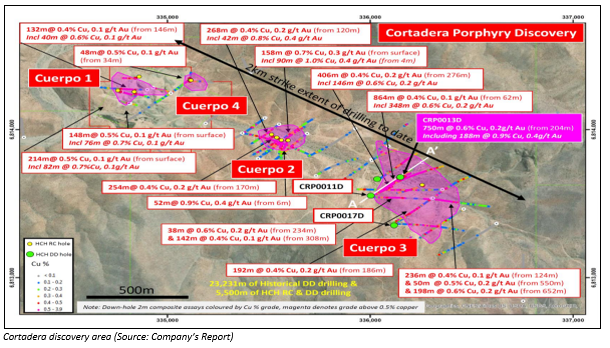 Hot Chili Limited further added that in the past few months, it had received new in-bound corporate interest in its strategic funding process with numerous groups involved, in advanced due diligence of the company’s Chilean copper-gold assets.

Recently on 26 August 2019, the company announced that one of its directors Murray Edward Black had made a change to his interests in the company by acquiring 16,666,667 shares at the consideration of $0.03 per share. The change in the interests was made on 26th August 2019.

Moving to the stock performance, HCH’s stock last traded at A$0.030 per share, by the end of the trading session on 4th September 2019. In the time frame of one month and six months, the stock provided with a negative return of 12.12% and 3.33%, respectively.

Galan Lithium Limited (ASX: GLN) is into exploration work of lithium brines, contained by Lithium Triangle, in Argentina region. The company has a market capitalisation of A$22.26 million as on 4th September 2019.

GLN on 4 September 2019, announced that it has appointed Mr. Daniel Jiménez Schuster for the designation of independent non-executive director to the board of the company. Mr. Schuster is based out of South America and has an expertise in the lithium industry.

In another update, on 20 August 2019, the company announced that it had extended the closing date for its share purchase plan from 23rd August 2019 to 13th September 2019. It added that under the terms of Share Purchase Plan, the eligible shareholders of the company are being enabled to apply for parcels of new fully paid ordinary shares in GLN, which are ranging from a minimum parcel of $1,000, up to a maximum value of $15,000, without incurring brokerage or other costs. The issue price of shares under the SPP is A$0.18 per Share. The issue date for Shares subscribed would now be on or around 17th September 2019.

A glimpse at June Quarter

During the quarter ended 30th June 2019, GLN successfully and safely wrapped up its maiden drilling campaign at Candelas and has recorded no lost time injuries since drilling exploration, which began in January 2019. The cash balance of the company stood at ~A$2.8 million at the end of the quarter. 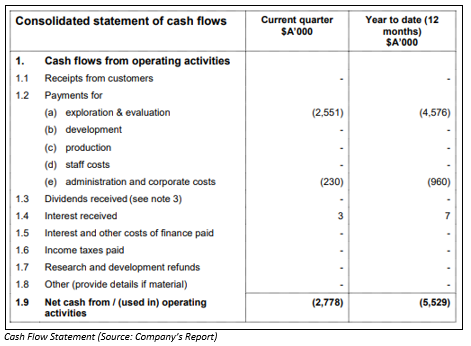 Vintage Energy Ltd (ASX: VEN) is into the exploration of oil and gas, and has a market capitalisation of A$39.99 million as on 4th September 2019.

It was also mentioned in the release that a total of 62 metres of predominantly sandstone core has been cut and recovered, with gas shows being observed.

A look at June Quarter

On 31 July 2019, the company declared quarter report closed 30 June 2019 and stated that during the quarter Ensign Rig 932 was mobilised from Moomba to the Galilee Basin, with the Albany-2 well spudded on 30 July 2019. However, the scheduled entire depth of the well is of 2,752 metres and with work like drilling, logging operations and so forth, it is anticipated to take around thirty-one days.

During the quarter, GLN had inked a memorandum of understanding with APA Group (ASX: APA) in order to connect the Galilee Basin to Australia’s east coast. The net cash outflow from the operating activities stood at A$ 635,994 post settling payment for administration and corporate costs and staff costs amounting to A$375,570 and A$337,239, respectively. 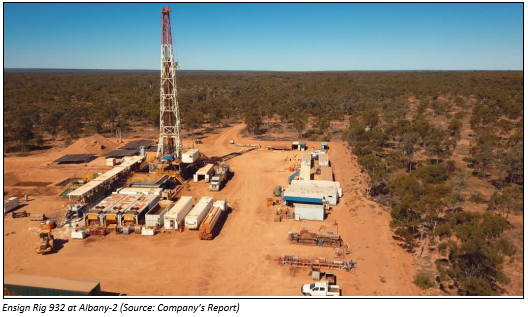