Notify Your Investor Side With These Financial Stocks- MFG, MQG And PTM

Let us look at the three stocks from the financial space and understand their stock performances and latest updates. Though, firstly, we would acquaint ourselves with the businesses that these companies cater to:

On 5 September 2019, the company intimated the market about its funds under management as at 30 August 2019. It mentioned that in August this year, MFG witnessed net inflows of $315 million, consisting of net retail inflows of $162 million and net institutional inflows of $153 million.

Recently, on 30 August 2019, MFG’s Chairman Mr Hamish M Douglass addressed the company’s shareholders through a letter, stating that the company had a successful financial year with the average funds under management up by 28 per cent to $75.8 billion and the adjusted net profit after tax up by 35 per cent to $364.2 million.

Besides this, the company on 13 August 2019, announced the IPO of the Magellan High Conviction Trust, a new investment trust to be listed on the ASX.

On 4 September 2019, MQG notified that it intended to conduct a Share Purchase Plan, and the SPP offer would close on 20 September 2019. The lower of the issue price paid by institutional investors as per the Placement was $120/share, along with a 1 per cent discount to the volume weighted average price of the securities traded during the five Australian Securities Exchange trading days before to and consisting of the closing date. The timeline of the same is highlighted in the table below: 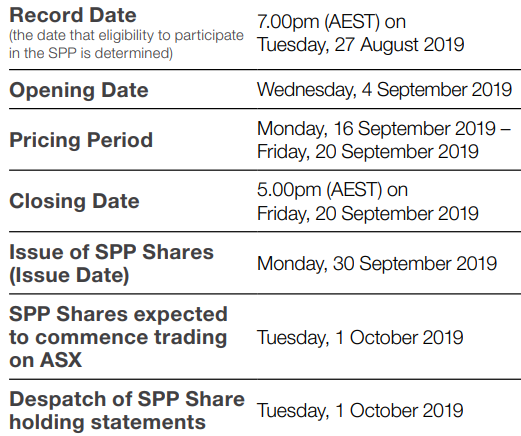 The SPP allows eligible Macquarie stakeholders with a registered address in Australian region or NZ region to subscribe for up to $15,000 worth of fresh, fully paid ordinary shares, devoid of experiencing brokerage or other transaction costs. Recently, the company had conducted a placement of fully paid ordinary shares in Macquarie to institutional and professional investors, raising $1 billion, the proceeds of which would provide flexibility to invest in new opportunities, while maintaining appropriate capital levels in light of the ongoing regulatory change.

On 16 September 2019, the company released its annual report for 2019, for the period closed 30 June this year. Like a lot of Australian companies, PTM witnessed a challenging year, as the investment returns for most of its managed funds and portfolios slumped in the broader market, which consequently incurred lower fund flows, lower investment performance fees and a dip in the EPS and dividends. The highlights of the Annual Report are discussed below:

Let us now look at the share performance (as on 17 September 2019, AEST 2:22 PM) and YTD return of the three financial stocks in discussion:

CLICK HERE FOR YOUR FREE REPORT!
Tags:
platinum asset management limited magellan financial group limited S&P/ASX 200 Macquarie Group Limited ASX: MQG ASX: MFG Financial Stocks ASX:PTM
All pictures are copyright to their respective owner(s).Kalkinemedia.com does not claim ownership of any of the pictures displayed on this website unless stated otherwise. Some of the images used on this website are taken from the web and are believed to be in public domain. We have used reasonable efforts to accredit the source (public domain/CC0 status) to where it was found and indicated it below the image.