PTM - Is Platinum Management Unable To Take The Recovery Track?

Platinum Asset Investment Management Limited (ASX: PTM) is a non-operating holding company, engaged in funds management business. The profitability of the business is directly correlated to the FUM growth, investment performance, management performance fees. During March 2019, the total FUM was reported at $25,756.5 million, which was 0.1% higher than the previous month’s FUM of $25,724.6 million. In March 2019, Platinum experienced net outflows of approximately $230 million, which included net outflows of around $172 million from the Platinum Trust Funds. From the Fund Flow front, Semi-annual gross flow for December 2018 came in at $1,890 million, higher as compared to $1,612 million in June 2018, but slightly lower than $2,092 million. On an annual basis, FY18 witnessed a whopping growth of 90% in total gross flow at $3,704 million against $1,948 million in FY17. Slower inflows in the last months of the half year can be attributed to weak market conditions and relative underperformance of the fund impacting the investor sentiments. However, overall FUM for half-year ended December 2018, remained robust with a net inflow of $689 million received from investors. FUM at 31 December 2018 stood at $24.1 billion, posting a decline of 6.3% from June 2018. The reduction in FUM was largely due to a decline in investment performance. However, net inflows remained resilient at $0.7 billion for December 2018. 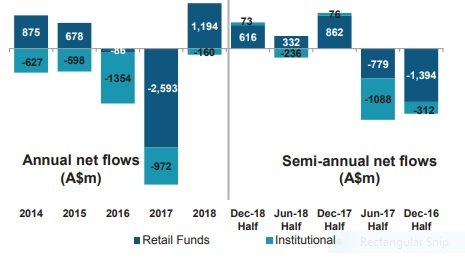 Total revenue for 1H FY19 came in at $132.97 million, recording a growth of 28.49%. Net profit came in at $65.17 million in 1H FY19 posted a growth of 37.71%. Despite challenging investment markets, Fund management business performed well with the management fees up by 2.5% for half-year December 2018 (Y-o-Y). The profit before income tax expense for the fund management business came in at $111 million for half-year December 2018, up 6% (Y-o-Y). This performance was on account of a positive mix shift in FUM towards retail.

Further, the Investment Managers are quite hopeful and expects the portfolio to perform well in the future depending on the market conditions.

PTM has consistently paid a dividend to its shareholders from its profits. Going forward, the Board expects to distribute most future profits by way of dividends subject to the ongoing capital requirements of the company. PTM declared an interim dividend (fully franked) of 13 cents, resulting in a dividend pay-out of 100%.