All that is recent with these Blue-chips- NAB and WES

In a game of poker, blue chips are regarded to be the most valuable chips. On the similar lines, in financial terms, blue-chip stocks refer to the shares that pertain to a company that is well-established, is financially stable and has sustained in the business for a long time. These stocks pay dividends that are stable and on the rise. Considering this criteria, blue-chip stocks have large market capitalization, and ideally leads the sector it prevails in.

Below are some of the trending blue-chips shares trading on the Australian Securities Exchange:

In the light of this backdrop, let us now look at the recent updates and present stock performances of two blue-chip shares, trading on ASX- NAB and WES:

Company Profile: Australia’s largest business bank, NAB has been in the business for over 160 years. The bank caters to customers in over 900 locations in the ANZ region and across the globe. The company works with small, medium and large businesses and funds infrastructural activities as well. The bank was listed on ASX in 1974 and has its registered office in Docklands.

Half-year Results: On 2 May 2019, the company presented its 1H19 financial highlights and stated that the company had faced a terse period with the Royal Commission urging it to take actions to fix any issues and win back the trust of its customers. The bank has stayed focussed on taking necessary actions to address community and customer expectations. The company has been resetting its financial parameters- with CPS conversion of $750 million, DRP up to $1.8 billion and $1.1 billion in remediation charges with more to come. Moreover, APRA self-assessment was being conducted as a regulatory measure.

The Net Operating Income was up by 1.4 per cent on pcp and the operating expenses were up by 1.7 per cent. The net interest margin was down by 7 basis points. The financial highlights of the bank are depicted in the image below: 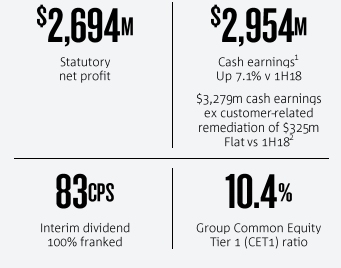 NAB’s Outlook: The company is anticipating a slow GDP growth of 2 per cent in 2019. The unemployment is low at 5 per cent and the house credit is slowing as well. NAB expects an approximately 3 per cent annual growth in FY19 and FY20. In this slumped economic environment, the company’s confidence is below average, as compared to the past years. 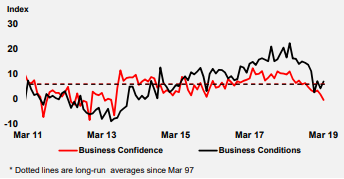 On 27 June 2019, the company notified that it would release its 2019 financial year third quarter trading update on Wednesday 14 August 2019.

Company Profile: Counted amongst the country’s largest listed companies, WES is a business giant providing apparel, home improvement and outdoor living products, office supplies and has a diversified wing with businesses in the industrial, chemical, energy and fertiliser sector as well. The company originated in 1914 and was listed on the ASX in 1984. The headquarters of WES is in Perth.

Stock Performance: On 3 July 2019, WES is trading at A$36.415, up by 0.76 per cent, relative to its last trade. With one of the largest market capitalisations (in its sector) of ~A$40.98 billion, the company is trading with approximately 1.13 billion outstanding shares. The annual dividend yield has been 6.09% and the stock’s P/E ratio is 7.390x. In the past three and six months, the stock has generated returns of 4.81 per cent and 17.90 per cent, respectively.

The company had agreed to the scheme implementation deed towards the acquisition of Kidman Resources on 23 May 2019. The scheme is expected to be completed in September this year. As per the company, this is a great path to venture out in the business of electric vehicle and enhance its capabilities in the field of chemical processing, which is anticipated to boom in the coming times.

Besides this, the company notified that it would be acquiring Catch Group, a leading Australian online retailer for $230 million, which is subject to the ACCC approval, expecting to receive a green signal in the coming few months.

On the financial end, WES’s Divisional cash generation from continuing operations has averaged more than 100 per cent since FY14. The company has steadily focussed on working capital efficiencies. In FY19, the net capital expenditure is expected to be in the range of $800 million and $850 million. The interest expense is expected to be between $170 million and $180 million. 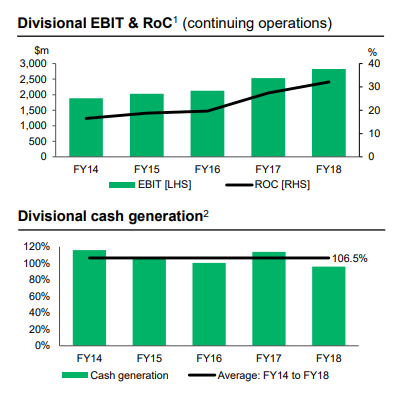