Neither is virtual reality a new thing, nor is gaming. But both are undergoing a shift, thanks to Facebook’s rebranding as Meta Platforms and blockchain penetrating the gaming industry.

There is a lot of activity in the blockchain gaming industry after Facebook’s focus on metaverse. That the world of augmented reality will attract more people and blockchain-based creatures will be one of the key highlights of this virtual world is the talking point. Metaverse can be understood as a virtual world with computer-generated creatures, meeting rooms, even plots of land to own and uniqueness like NFTs.

In this light, let’s find out five blockchain games that may find more takers in the coming days.

Axie Infinity is a big name in the blockchain. The nearly US$8 billion market cap of AXS makes it one of the top 30 cryptocurrencies.

Axie has virtually everything that blockchain enthusiasts love. First, it is a blockchain-powered game with ownership and operations managed by users. The AXS governance token gives powers to users to vote on the game’s infrastructure and upgrades. Second, the game claims that the ‘Axie’ character – used to take part in combats, is a non-fungible token (NFT).

NFTs were arguably the biggest crypto craze in 2021. Digital artwork of Beeple, and CryptoPunk created by Larva Labs sold as NFTs and fetched millions of dollars each for the seller. 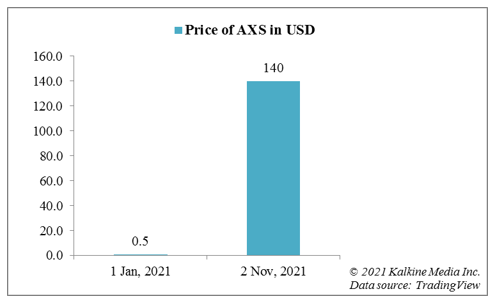 Third, the price appreciation of the AXS cryptocurrency has so far been phenomenal. It started with a price tag of nearly US$0.54 on January 1, 2021. As of now, AXS is priced at nearly US$140 apiece. Facebook’s Meta rebranding announcement led to surge in price over the past few days.

Also read: What are DeFi games & which are the most popular DeFi games?

Alien Worlds is an augmented reality space where players can earn rewards through participation. This platform has multiple decentralized autonomous organizations (DAOs) grouped as planets. Players can compete to become ‘councilor’ of these planets. The TLM token is used for staking, which makes Alien Worlds a decentralized finance (DeFi) platform.

The market cap of Alien World’s token TLM is over US$250 million as of now, and it is priced at nearly US$0.28. The token had hit a peak price of nearly US$6.5 in April 2021. The recent surge in AXS may bring attention to TLM.

Decentraland is not a typical combat game. It uses the Ethereum’s blockchain to create its own metaverse where users can purchase some land and build it with a view to monetize later.

On the plots of land, the owner can even enable a gaming infrastructure. Decentraland has likely already done what Facebook wants to do with virtual reality, albeit the scale of Facebook will be bigger. It is said that each piece of land on Decentraland measures 256 sq. meters and can be located using coordinates.

MANA is the governance token of Decentraland’s metaverse. MANA holders can vote on upgrades. The project has adopted the DAO structure. Every piece of land is an independent NFT, making the project more appealing to enthusiasts.

MANA’s market cap is nearly US$5.8 billion as of now, with each MANA priced at nearly US$3.2. The altcoin has risen sharply after Facebook’s rebranding news.

‘Play to earn’ is a dedicated field in the growing world of cryptocurrencies. The Sandbox is another such platform that combines NFTs, gaming and blockchain. It creates a virtual reality world where users can create and sell digital assets with gaming underpinning the entire arrangement.

SAND is the utility token within the metaverse of The Sandbox. Players can use it to vote on the governance issues within the platform. The Sandbox envisions using blockchain’s decentralized features to change traditional gaming. 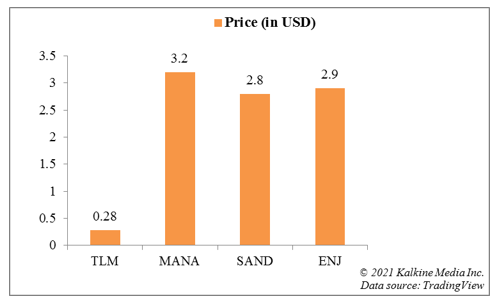 With a market cap of nearly US$2.5 billion as of now, SAND token is one of the top 100 cryptos. It is was priced at nearly US$0.036 at the start of 2021 and currently priced at almost US$2.8. The jump in value is attributable to Facebook’s Meta announcement.

Enjin has been in the gaming space since 2009. According to the company, its gaming community has grown to nearly 20 million users. The company entered the blockchain gaming space in 2017. It now allows its users to create clans and websites that can be monetized using crypto tokens.

The platform allows the building of smart contracts for the creation of fungible as well as non-fungible Ethereum based tokens. Enjin Coin is the native token of the platform used to build smart contracts. Launched in 2018, ENJ is an ERC-20 token that backs all digital assets created by Enjin users.

Enjin Coin is another multi-billion dollar cryptocurrency with a market cap of nearly US$2.4 billion as of now. It is trading at nearly US$2.9, which is a significant gain over the price of nearly US$0.13 at the start of the year.

Though Facebook’s name change announcement was a trigger behind the popularity of metaverse, many blockchain gaming platforms have already created a virtual reality world. The native cryptocurrencies of these platforms have gained over the past few days on the back of optimism for augmented reality. One such token, Axie Infinity’s AXS, has given whopping returns to its backers in 2021. With the entry of tech giant Facebook in the metaverse, they are likely to draw more backers. Moreover, the platforms also use NFT features, which add to their appeal.